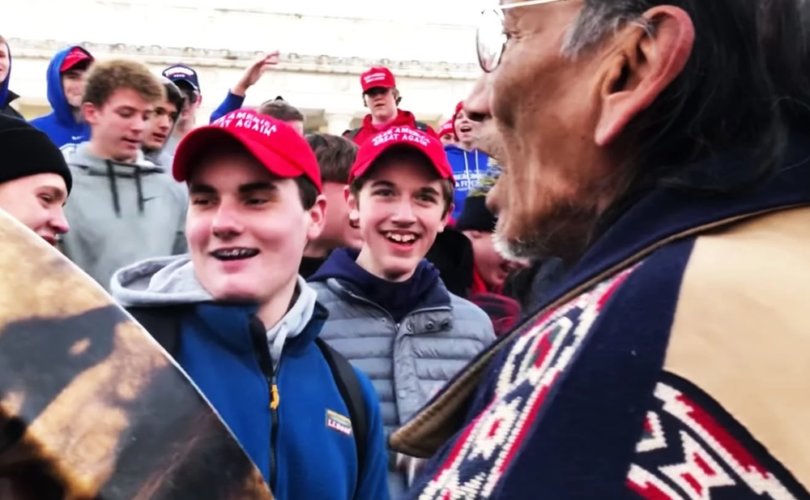 BALTIMORE, Maryland, January 23, 2019 (LifeSiteNews) – The Archdiocese of Baltimore is apologizing today for “speak[ing] out too hastily” in criticizing the Covington Catholic High School students who had a confrontation with Native American activists while attending the March for Life in Washington, D.C. last week.

In a statement provided first to LifeSiteNews, the archdiocese admits to weighing in too quickly following initial reporting of the confrontations that was subsequently discredited.

The annual March for Life is a magnificent affirmation of the value and dignity of human life. It is especially wonderful that so many young people from all around the nation participate in this March and the Archdiocese of Baltimore applauds them for doing so. How sad, then, that this life-affirming event was marred by the widely reported confrontation at the Lincoln Memorial. It has become apparent, however, that initial reports of that incident were at best incomplete. Those incomplete reports led many, including the Archdiocese of Baltimore, to speak out too hastily. We apologize for doing so. It is our hope that the young people involved were in fact acting in accord with the truth and values that are foundational to Catholic education. We also hope that this sad incident will give to all a renewed determination to respect the life and dignity of every person without exception.

The Archdiocese of Baltimore has provided LifeSiteNews a breaking response in follow-up to its earlier statements on the confrontation last Friday in Washington D.C. after the March for Life between native American activist Nathan Phillips and a group of Covington Catholic High School students.

An initial short video posted on social media over the weekend portrayed the group of students from the northern Kentucky Catholic high school as accosting Native American activist Nathan Phillips. The mainstream media ran with a narrative accusing the boys of racism, focusing on the fact the boys were wearing hats containing Donald Trump’s “Make America Great Again” slogan.

Liberal backlash ensued on a grand scale, and the boys and their families, as well as the school remain the subjects of venom and threats of violence and death.

But the full video told a different story; that as the boys awaited their busses near the Lincoln Memorial later in the day following the March for Life, Phillips approached them and persistently chanted and played his drum right in the face of one of them, Nick Sandmann. Sandmann stood in place with an awkward facial expression in response to inexplicable approach by Phillips, 64, to the high school junior.

Comprehensive footage shows how the students were not dishing out racist and bigoted treatment; they were in fact on the receiving end, from another group of radical activists and one of Phillips’ associates. The full footage shows the boys exercising restraint to what they were being dealt.

The March for Life and others in the pro-life community, along with some Catholic leaders, accepted the narrative put out by the media without verifying the facts and quickly denounced the actions falsely attributed to the students.

Most issued some sort of follow-up after the false media narrative was exposed, to some degree walking their initial statement back, but minus actual apology or mention of the danger faced by the Covington families to which their jumping on the media bandwagon contributed.

The Diocese of Covington itself has still yet to apologize for condemning the boys.

The Baltimore archdiocese’s initial response was in a tweet early in the morning of Sunday, January 20.

“The Archdiocese of Baltimore condemns the disrespect shown toward a Native American elder during the March for Life,” it said. “Respect for life demands all are treated with dignity.”

In its follow-up statement the next day, the archdiocese said:

The Archdiocese of Baltimore wishes to clarify its message condemning what was widely reported as disrespect toward a Native American elder during the March for Life in Washington, D.C. We reiterate our condemnation of disrespect and denigration toward any person or group based on the color of their skin, their religious or ethnic heritage, or immigrant status. The circumstances of this confrontation at the Lincoln Memorial are now being reported as more complex and it will be the responsibility of school authorities, parents and others involved to determine the actual circumstances, responsibility and consequences. Regardless, it is deeply unfortunate that the annual March for Life was marred by this confrontation. We commend all who participated in the March to bear witness to the sanctity of life from conception to death, and the inherent dignity of every human person as a child of God.

We encourage all to reflect on Archbishop William E. Lori’s pastoral letter on racism, released today when our nation is honoring the enduring legacy of Dr. Martin Luther King, Jr.   To read the letter, click here.”

Countless social media followers of the Archdiocese of Baltimore conveyed strongly in comments how this clarification fell short.

LifeSiteNews inquired with the archdiocese Tuesday asking whether Archbishop William Lori was standing by the archdiocese's statements of condemnation of the Covington Catholic students' purported actions towards Nathan Phillips and Native Americans.

The inquiry noted that the issue continues to resonate with Catholics, other conservatives and pro-life parents in particular, distraught over Church leaders issued condemnations without all the facts and contribute to exposing Catholic students to extreme vitriol.

Catholics continue to call for apologies for the rash judgment and resulting dangerous consequences for the Catholic families involved.

At press time LifeSite’s petition urging the Covington diocese, the school and the media to apologize garnered more than 21,000 signatures.