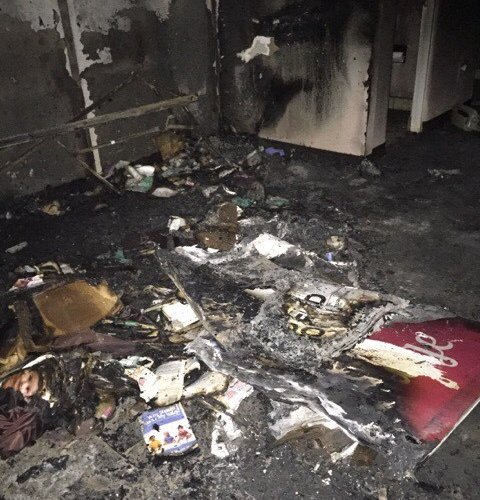 ALBUQUERQUE, New Mexico, November 23, 2016 (LifeSiteNews) – Arsonists are suspected in a fire that rendered a pro-life pregnancy center inoperable, and pro-life students are demanding that Planned Parenthood denounce this as a “hate crime.”

Early this morning, someone broke into Project Defending Life, also known as Women's Pregnancy Options, and set fire to the building's Holy Innocents Chapel and a room containing pro-life literature. According to the Albuquerque Fire Department, at 12:32 a.m. they received a call about smoke coming from the Project Defending Life building and crews arrived within minutes to extinguish the fire.

Students for Life of America said that the fire department confirmed with students that the fire was intentionally started by an arsonist and at least one of their students has spoken with the FBI. Project Defending Life confirmed this.

“Authorities notified us around midnight that there was a break-in and fire in our facility, leading fire Marshalls to call the FBI, who confirmed this was an act of arson,” said Dominique Davis, Project Defending Life's director of client services. “The arsonist has not been identified, but it has been confirmed that they set two fires within the facility. The first fire was started inside the Holy Innocents chapel, which destroyed the chapel. The second fire was located in the foyer where our literature and signs were displayed. The extent of the damages has still not been confirmed, although the facility has suffered great damage and currently has no power. Due to the damages and the current investigation, Project Defending Life will be shut down until further notice.”

“This attack on our pregnancy resource center will affect many women and families who come to our facility to receive baby items, parenting classes, pregnancy services, and support,” she continued. “Many of our clients are able to find jobs and housing through our services, and we are saddened with the reality that we will have to put our assistance to clients and the public on hold.”

“We are disgusted by this hate crime committed against Project Defending Life, a peaceful organization whose only aim is to help women facing unplanned pregnancies, and we are so thankful that no one was injured,” said Kristan Hawkins, president of Students for Life of America. “The domestic terrorists who committed this heinous act must be found and brought to justice. Planned Parenthood of ABQ and other pro-abortion forces must denounce this act immediately. Violence has no place in our society, regardless of whether it is committed upon the most defenseless preborn child or a peaceful pro-life office.”

“Project Defending Life and the Holy Innocents Chapel [have] always been about mercy and healing” and “shining a light in the darkness,” said Priest for Life's Father Stephen Imbaratto, who founded Project Defending Life but is no longer affiliated with it. “Those who love life will continue to be a light in this world. We must continue to pray and fast that darkness such as this does not prevail. Life always overcomes death because Jesus came into the world to bring light into the darkness and to conquer death through eternal life.”

“While this intentional evil act was meant to scare us and inhibit us from doing our work, those who committed this crime can be assured it has not,” said Davis. “There are still many women in need of assistance and support, not including the 15 women we are currently helping with housing, job placement, and parenting support lomg term. While our building may be finished, we are not, and we will find another place to set up. Thank you everyone for your prayers and generosity. The magnitude of helping hands and kind words show how much our community really cares and that is the most meaningful of it all. We would like to thank our local authorities for all of their hard work during this investigation, as well as the overwhelming amount of support from our supporters and the public.”

The city has been the site of an unsuccessful ballot initiative to ban late-term abortion and is home to continued pro-life protests.

Hawkins said the pro-life community wouldn't cease reaching out to abortion-minded women even though the pregnancy center is temporarily closed. She said pro-lifers are working to put a mobile unit outside Southwestern Women's Options until Project Defending Life's center is restored.

Last month, a Virginia maternity home was also victimized by an arsonist. No one was injured but the building and its equipment were damaged.