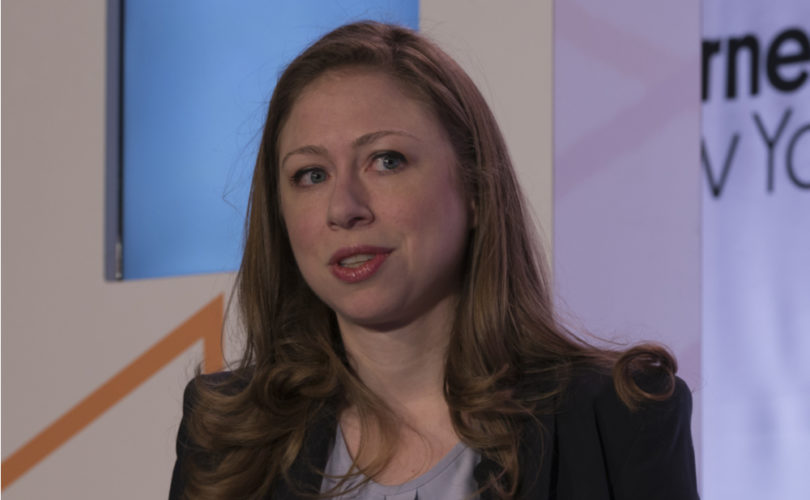 VATICAN CITY, May 7, 2021 (LifeSiteNews) — Chelsea Clinton has spoken out against freedom of vaccine-critical speech at a Vatican conference dedicated to dialogue.

Speaking during a pre-recorded online meeting, Clinton, 41, responded to a question about so-called “vaccine hesitancy” regarding COVID-19 vaccines by saying that there must be a global effort to crack down on vaccine-critical social media posts.

“I personally very strongly believe there has to be more intensive and intentional and coordinated global regulation of the content on social media platforms,” she said.

“We know that the most popular video across all of Latin America for the last few weeks that now has tens of millions of views is just an anti-vax, anti-science screed that YouTube has just refused to take down.”

Clinton added that anti-vaccine content created in the United States “flourishes” across the world by way of social media platforms. Her attempts to convince the managers of these sites to remove the material has not worked, she said.

“We know that — because I have tried — that appealing to the leadership of these companies to do the right thing has just not worked, and so we need regulation.”

Clinton is the Vice President of the Clinton Foundation and the daughter of former President Bill Clinton and former Secretary of State Hillary Clinton. Like her parents, she is an outspoken advocate for abortion.

She appeared alongside Dr. Paul Farmer of Harvard Medical School and Dr. Walter Ricciardi, the Italian president of the World Federation of Public Health Associations, at a pre-recorded online meeting forming part of the Fifth International Vatican “Unite to Prevent & Unite to Cure” conference. Their meeting was first aired today.

Clinton said that the Clinton Foundation has been doing what it can to convince the “vaccine hesitant” and the “vaccine refusers” to take doses of the COVID-19 vaccines. She believes it is important to differentiate between people who are “hesitant” and those in the “refusal group.” The “hesitant” have questions that she can answer, for instance regarding the speed at which the vaccines were developed, their ingredients, and “conspiracies about microchips.”

The people in the “refusal group,” “often young people, don’t think they need the experimental vaccine or would prefer to wait a few years before taking it, Clinton added. They also include people in communities who “have been maltreated” by the American “health system for generations.”

Clinton said that her foundation thinks about “how we talk to black Americans, indigenous Americans, Latinos who know that members of their community have often been mistreated or even manipulated or exploited by our health care system.”

In response, the Clinton Foundation passes on advice to people trusted by those communities to convince them to take the COVID-19 injections.

“We try at the Foundation to really help equip trusted messengers, whether in health care settings or not,” Clinton said. “We’ve done work with a number of different religious communities, including some of our Catholic partners to really help ensure that whoever is able to have the conversation is really able to pre-empt or to answer any questions people may have.”

The message Clinton wants to get out to refusers is that the vaccines and vaccinators are waiting for them whenever they are comfortable.

“And we’re going to keep reaching out and try to help you get comfortable,” she added.

“So we’re just doing everything and anything we can … and we’re increasingly thinking about how we can engage in this work globally, too, because unfortunately vaccine hesitancy and vaccine refusal are not uniquely American challenges.”

Clinton made it clear that her views about “regulation” of social media content were her own and not those of the Clinton Foundation.

The COVID-19 pandemic and COVID-19 vaccines have been central to the recorded deliberations broadcast by the Vatican’s Pontifical Council for Culture. The three-day “Unite to Prevent & Unite to Cure” conference began yesterday and will continue into the weekend.

Earlier this week, LifeSiteNews was permanently banned from Facebook.

In a quick series of notices and emails to LifeSite’s marketing department, Facebook delivered the news, accusing LifeSite of publishing “false information about COVID-19 that could contribute to physical harm.”

Facebook cited a LifeSiteNews article posted on April 10, 2021, headlined “COVID vaccines can be deadly for some.” The article cited U.S. government data on coronavirus vaccine injuries and deaths.

Commenting on the deplatforming of LifeSiteNews, Tucker Carlson remarked, “Our health authorities have reserved their energy for anyone who dares to question vaccines.”

Apart from Clinton, speakers at the Vatican conference include prominent and diverse names such as the CEOs of Pfizer and Moderna, the former of which produces abortion pills; the Director of the National Institute of Health (NIH) Francis Collins, who advocates using fetal tissue in research projects; the head of Google Health, David Feinberg; and COVID czar Dr. Anthony Fauci of the U.S. National Institute of Allergy and Infectious Diseases.

Salesforce CEO Marc Benioff is another speaker. He has a history of promoting LGBT issues, and is described by TIME as “one of the most outspoken executives” for LGBT affairs.

There were only two Catholic clergy listed amongst the 114 speakers.

Michael Haynes contributed to this report.

Viganò on Vatican ‘health’ conference with Fauci: Holy See is ‘making itself the servant of the New World Order’