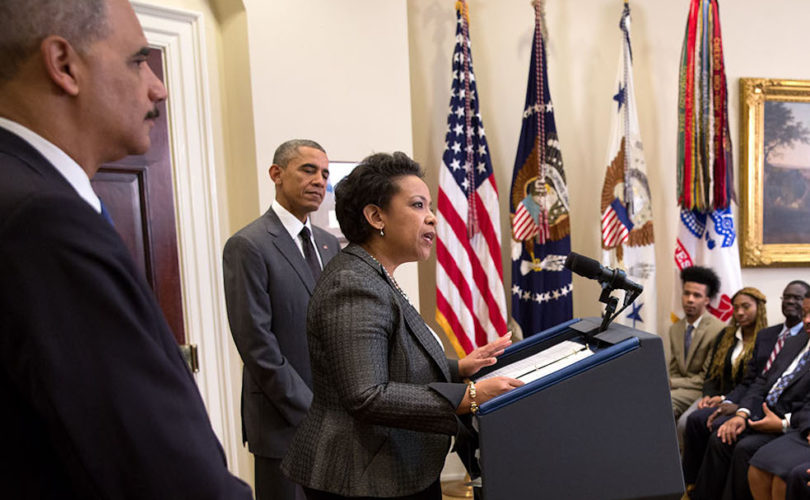 WASHINGTON, D.C., May 9, 2016 (LifeSiteNews) – The Justice Department filed a lawsuit today stating that North Carolina has violated federal civil rights laws by overturning ordinances mandating that transgender people can use the restroom and shower facilities of the opposite biological sex.

“This is not the first time we have seen discriminatory responses to historic moments of progress to our nation,” said Lynch in a press conference scheduled for 3:30, which began half an hour late. “We saw it in the Jim Crow laws that followed the Emancipation Proclamation. We saw it in the fierce arguments against Brown v. the Board of Education” – the 1954 Supreme Court decision that overturned segregation. “And we saw it in the state bans on same-sex unions that were intended to spike any hope that one day gays and lesbians might be afforded the right to marry.”

“It was not so very long ago that states, including North Carolina, had signs above restaurants, water fountains, and public accommodations, keeping people out,” she said.

“This is about a great deal more than bathrooms,” Lynch continued. “It's about the Founding ideals that have led this country, haltingly but inexorably, in the direction of fairness, inclusion, and equality for all Americans.”

Addressing “the transgender community” directly, Lynch, a North Carolina native, said, “Please know that history is on your side.”

Vanita Gupta, head of the Justice Department's civil rights division, agreed the lawsuit is about principles of the highest order.

“I want to make one thing clear,” Gupta said. “Calling H.B. 2 a 'bathroom bill' trivializes what this is all about.”

It was Gupta who wrote the letter to North Carolina officials last Wednesday saying that the state must agree not to enforce the Public Facilities Privacy and Security Act (H.B. 2) or risk today's retribution.

Aside from the federal civil rights lawsuit filed today, the Departments of Education, Transportation, and Housing and Urban Development (HUD) threatened late last week to withhold funds totaling at least $3 billion if the state did not comply with the Obama administration's will by this afternoon.

“The federal government is threatening North Carolina for lawfully enacting common-sense legislation that simply protects people’s privacy and respects the right of private businesses to set their own policies,” said Alliance Defending Freedom Legal Counsel Kellie Fiedorek. The ADF has filed suit on behalf of families in Palatine, Illinois, after the school district yielded to the Obama administration's pressure to change its restroom and locker room policies.

“The administration’s lawless attack on H.B. 2, and its threat to economically harm the state by withholding millions of federal dollars, is the latest attempt to coerce conformity with the administration’s political agenda,” she said.

The DOJ states H.B. 2 violates the Civil Rights Act of 1964 and the 1972 Title IX law, both of which make discrimination on the basis of “sex” a federal offense. Gupta also invoked the Violence Against Women Act (VAWA).

But lawmakers had no intention of applying the groundbreaking civil rights law – promoted by Martin Luther King Jr. and signed by President Lyndon Johnson after John F. Kennedy's assassination – to transgender people, who hardly entered the national consciousness more than five decades ago.

“Martin Luther King Jr. didn't march on Selma so that grown men and boys could march into girls changing rooms,” said Traditional Values Coalition President Andrea Lafferty. “No legislature passed this interpretation, no executive signed this into law. The Obama administration is interpreting this law by regulatory fiat.”

King's niece, Alveda King, wrote in her book King Rules that, if he were alive today, Martin Luther King Jr. would fight to preserve marriage as the exclusive union of one man and one woman.

Leaders nationwide praised Gov. McCrory, a moderate Republican and former mayor of Charlotte, for holding the line on restroom privacy against massive pressure from government and corporate titans alike.

“Gov. McCrory is to be commended for standing up for the people he represents and refusing to put a price tag on the privacy and safety of women and girls. All Americans should be thankful that we still have strong leaders like Gov. McCrory who don’t surrender to intimidation by politicians and bureaucrats in Washington,” said Fiedorek.

“I can assure you, so long as there are Christians drawing breath in America, we will not be silent, and we will push back,” she said.

Obama admin warns North Carolina: Ignore bathroom privacy law or else
Get the DOJ Out of our Restrooms!