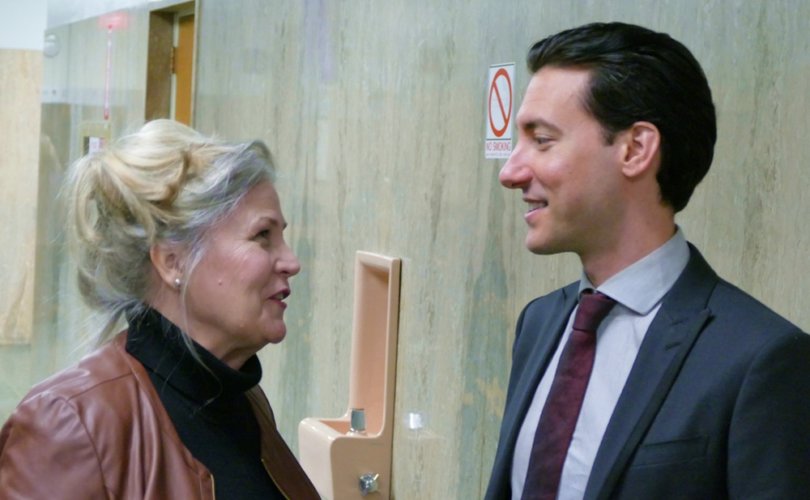 In a ruling released today, Judge Christopher C. Hite of the San Francisco Superior Court dropped five counts against the Center for Medical Progress (CMP) pro-life investigators. He ruled, however, that there was sufficient evidence from the preliminary hearing to try Daleiden and Merritt on nine counts of breaking California’s anti-eavesdropping law during their undercover investigations.

Daleiden, 30, and Merritt, 64, could face jail time if convicted.

BREAKING NEWS: 6 counts in David Daleiden's criminal case have been thrown out of court and 9 remain. Judge Hite deems the evidence enough to go to trial on 9 counts. More to follow!

Daleiden tweeted that the case is falling apart.

“Former California Attorney General Kamala Harris concocted this bogus, biased prosecution with her Planned Parenthood backers against undercover video recording, and now their case is falling apart as the facts about Planned Parenthood’s criminal organ trafficking are revealed in the courtroom,” Daleiden said in a tweeted statement.

“The remaining charges under the California video recording law—the first and only time it has ever been used against undercover news gatherers—will fall for the same reasons that five charges were dismissed today: these were public conversations easily overheard by third parties. The real criminals are the Planned Parenthood leadership who sold fetal-body parts from late-term abortions and weaponized the justice system to try to cover it up.”

Daleiden and Merritt must now appear at California's Superior Court for instruction and arraignment on January 30.

Daleiden, Merritt and others secretly recorded gatherings of abortionists and organ harvesting companies, and CMP groundbreaking undercover videos released in July 2015 showed Planned Parenthood executives callously discussing how to dismember babies to procure intact organs and haggling over fees of aborted baby parts. The videos shocked the country and led to congressional and senate investigations into Planned Parenthood.

The abortion giant retaliated by suing the pro-life investigators.

A jury ruled November 15  that Daleiden, Merritt, Albin Rhomberg, and Troy Newman of Operation Rescue must pay Planned Parenthood $2.3 million in compensatory and punitive damages and lawyers’ fees for secretly recording Planned Parenthood and National Abortion Federation conferences in 2014 and 2015.

The pro-lifers are appealing the civil ruling.

“Today's ruling proves unfounded and outrageous charges against two pro-life journalists who exposed the harvesting and trafficking of innocent babies. This is a gross abuse of power and a violation of the First Amendment,” she wrote on Twitter.

“Animal activist groups went undercover at a duck farm & former CA AG @KamalaHarris used their expose to try to ban foie gras. But when pro-life reporters exposed @PPFA execs haggling over baby parts, the reporters were prosecuted & the abortionists protected,” she added in another Tweet.

Planned Parenthood is a serial human rights abuser that should be investigated, prosecuted & shut down for their horrific crimes against humanity.

Every charge against Daleiden & Merritt should be immediately dropped. This “trial” is a disgrace. #DefendJournalism

Harris initiated the investigation of Daleiden and Merritt in 2016, and current Democrat Attorney General Xavier Beccera announced the charges at a press conference in March 2017.

Testimony and evidence presented at the preliminary hearing in September exposed “this completely bogus, sham, politically motivated case” for the “farce that it is,” Daleiden told LifeSiteNews in an earlier interview.

Documents from the case now on public record show Harris “had an in-person meeting at the attorney general’s meeting in Los Angeles with no less than six top-level Planned Parenthood of California executives,” he said.

Daleiden added that the meeting took place a couple of weeks before Harris ordered Department of Justice agents to raid his Orange County apartment in April 2016 and seize all his recording materials, including unpublished source documents of his undercover investigation.

“We have the minutes in an email from the meeting that Kamala had with the Planned Parenthood leadership, and in that meeting they discussed both Planned Parenthood’s political agenda in the state of California, and they also discussed the attorney general’s investigation of me and of CMP,” Daleiden said.

Daleiden and Merritt are claiming a Section 633.5 defense that allows covert recording of confidential communications when done to collect evidence of violent crimes.

Defense is also arguing that the law does not consider confidential any conversation that can reasonably be expected to be overheard.

It was the venue for Daleiden’s first-ever public testimony about why he embarked on a 30-month undercover sting operation into Planned Parenthood trafficking in aborted baby parts and how he penetrated the networks of those involved in the grisly and illegal business.

It included a cross-examination of investigating agent for the Department of Justice Brian Cardwell that showed he did next to nothing to find out if those accusing Daleiden and Merritt of illegally taping them were telling the truth or understood “confidentiality” as defined in the law.

It featured defense testimony by one of the United States’ longest-practicing abortionists Dr. Forrest Smith. He testified that it is almost certain that some of the abortionists featured in the undercover videos deliberately altered abortion procedures in a way that both led to the birth of living babies with beating hearts and put women at risk. The goal in such abortions would be to obtain fresher, more intact organs.

It also included testimony by stem cell expert Dr. Theresa Deisher that the human fetal hearts used in a 2012 Stanford University study and supplied by StemExpress had to be harvested while the babies were still alive.

The “really shocking and troubling and clarifying truth that was exposed” in the preliminary hearing is that “it’s very, very clear that the only crimes that were committed in the course of the undercover videotaping that Center for Medical Progress did were the crimes committed by the Planned Parenthood abortion doctors, and by the StemExpress body parts harvesters who were forced to testify under oath these past two weeks,” Daleiden told LifeSiteNews at that time.