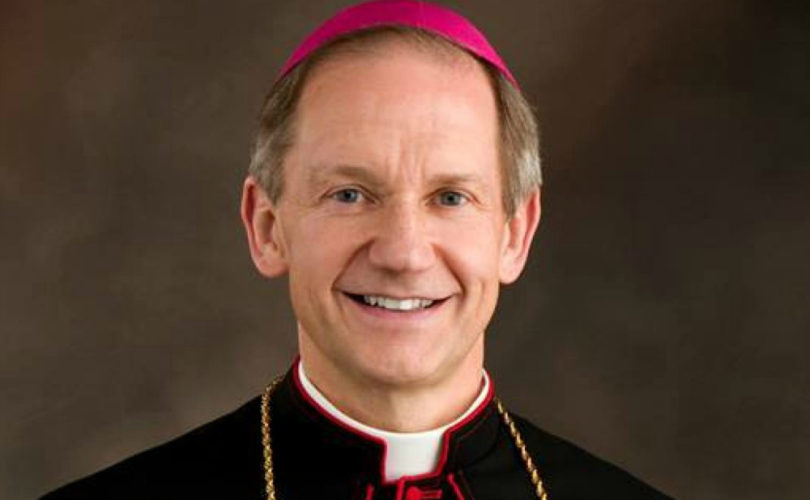 SPRINGFIELD, Illinois, February 22, 2018 (LifeSiteNews) – Bishop Thomas Paprocki announced last week that Democratic Sen. Dick Durbin, who lives in his diocese, is not to be admitted to Holy Communion until he repents of his public abortion advocacy.

The catalyst for this announcement was the U.S. Senate’s failure to pass the Pain-Capable Unborn Child Protection Act, which would have made most abortions after 20 weeks illegal (the bill had an exception for babies conceived in rape and incest).

“Fourteen Catholic senators voted against the bill that would have prohibited abortions starting at 20 weeks after fertilization, including Sen. Richard Durbin, whose residence is in the Diocese of Springfield in Illinois,” said Paprocki.

“I agree completely with His Eminence, Cardinal Timothy Dolan, Chairman of the United States Conference of Catholic Bishops’ (USCCB) Committee on Pro-Life Activities, who called the U.S. Senate’s failure to pass the Pain-Capable Unborn Child Protection Act ‘appalling,’” he said.

Paprocki noted that Canon 915 of the Code of Canon Law says those “who obstinately persist in mani­fest grave sin are not to be admitted to Holy Communion.”

“In April 2004, Sen. Durbin’s pastor, then Msgr. Kevin Vann (now Bishop Kevin Vann of Orange, CA), said that he would be reticent to give Sen. Durbin Holy Communion because his pro-abortion position put him outside of communion or unity with the Church’s teachings on life,” Paprocki recalled.

“My predecessor, now Archbishop George Lucas of Omaha, said that he would support that decision,” he said. “I have continued that position.”

Paprocki explained, “Because [Durbin’s] voting record in support of abortion over many years constitutes ‘obstinate persistence in manifest grave sin,’ the determination continues that Sen. Durbin is not to be admitted to Holy Communion until he repents of this sin.”

“This provision is intended not to punish, but to bring about a change of heart,” said Paprocki. “Sen. Durbin was once pro-life. I sincerely pray that he will repent and return to being pro-life.”

The Catholic Church teaches that the Eucharist confected by the priest at Mass is the literal body, blood, soul, and divinity of Jesus Christ. No Catholic who has committed a serious (mortal) sin is supposed to receive the Eucharist until he or she has repented of that sin and gone to Confession. Giving Holy Communion to a public figure whose sinful actions, votes, and statements prevent him from worthily receiving Holy Communion constitutes scandal in addition to sacrilege. Doing so can mislead and confuse the Catholic faithful.

In addition to his ardent abortion advocacy, Durbin votes for and publicly advocates against other Catholic moral teachings. He is a strong supporter of same-sex “marriage”; the pro-gay Human Rights Campaign gives him 100% on their scorecard. He also earned a 100% from abortion lobby group NARAL.

Ironically, Durbin was one of the senators who came under fire for asking a Trump judicial nominee questions that some scholars said violate the Constitution’s prohibition on a religious test for public officials.

“When you read your speeches, the conclusion one draws is that the dogma lives loudly within you,” Sen. Diane Feinstein, D-CA, told Amy Coney Barrett.

Durbin joined in Feinstein’s questioning, asking Barrett, “Do you consider yourself an orthodox Catholic?”

He boasted of being the product of 19 years of Catholic education, but then admitted, “every once in a while Holy Mother the Church has not agreed with a vote of mine, uh, and has let me know.”

Bishop Paprocki also cited the USCCB’s 2004 statement on Catholics in Political Life, which says, “Failing to protect the lives of innocent and defenseless members of the human race is to sin against justice. Those who formulate law therefore have an obligation in conscience to work toward correcting morally defective laws, lest they be guilty of cooperating in evil and in sinning against the common good.”