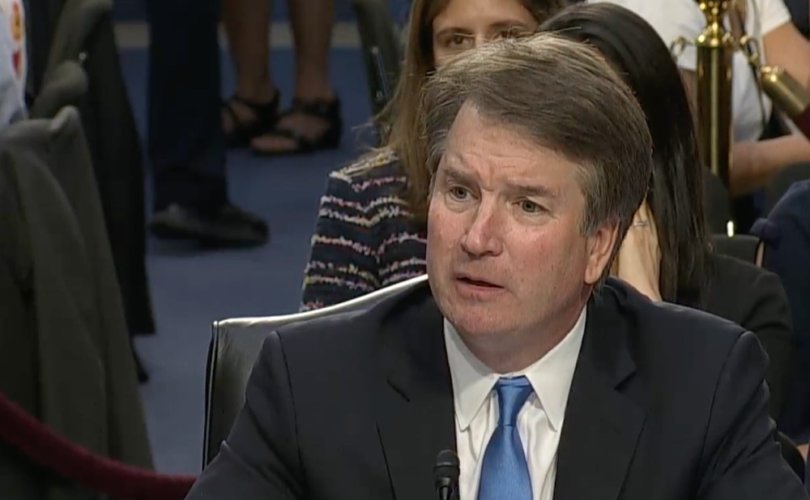 Just before the Senate was set to vote last month on President Donald Trump’s nominee to replace the retiring Justice Anthony Kennedy on the Supreme Court, a trio of women – Christine Blasey Ford, Deborah Ramirez, and Julie Swetnick – came forward to accuse Kavanaugh of sexual assault.

The District of Columbia circuit judge forcefully denies all of their claims, and many conservatives suspect the last-minute attacks are really part of a partisan effort to prevent Kavanaugh from potentially voting to overturn Roe v. Wade.

None of the individuals Ford claims attended the party where she says Kavanaugh tried to rape her can recall any such event, and critics have noted several inconsistencies in her different accounts of the incident. Swetnick changed multiple details of her own story in a recent interview, and has been involved in multiple lawsuits pertaining to false sexual harassment claims and other forms of fraud. Ramirez admitted to former classmates she wasn’t even sure of her alleged assaulter’s identity.

On Thursday, the FBI completed a series of interviews concerning the allegations – the bureau’s seventh background check of Kavanaugh – with Democrat Sen. Chris Coons of Delaware admitting “there is nothing in here that is some bombshell that is unknown.”

Following the report’s completion, Republican Sens. Susan Collins of Maine and Jeff Flake of Arizona, moderates seen as holding Kavanaugh’s fate in their hands, hinted Thursday that they are satisfied with the FBI’s findings. Both voted yes for cloture, as did moderate Democrat Sen. Joe Manchin of West Virginia. Pro-abortion Republican Lisa Murkowski of Alaska voted no.

The report and 51-49 tally don’t necessarily forecast the final outcome; however. CNN reports that Collins will announce her final vote at 3 PM eastern today, Manchin is staying mum on his final vote, and Flake is still undecided.  If one of those three defects, the Senate can still confirm Kavanaugh with Vice President Mike Pence breaking the tie.

The White House has reportedly refused to consider any “plan B” in the event of two or more sinking Kavanaugh’s nomination, drawing a line in the sand for Trump’s nominee.

Kavanaugh’s nomination has inflamed passions on both sides, as his replacement of liberal “swing vote” Kennedy could potentially give the Supreme Court its first clear conservative majority since Roe.

The judge has generally espoused a devotion to the Constitution’s original text and intent, though during his initial hearings he also expressed significant respect for Roe’s status as precedent, as well as mixed signals on the judiciary’s ability to declare rights not explicitly listed in the Constitution. His pro-life supporters and pro-abortion foes argue his non-committal answers were phrased to navigate a narrowly-divided Senate, and that he ultimately would vote to overturn Roe.

Just after the vote, President Trump tweeted he was pleased to see Kavanaugh clear his second-to-last hurdle:

Very proud of the U.S. Senate for voting “YES” to advance the nomination of Judge Brett Kavanaugh!