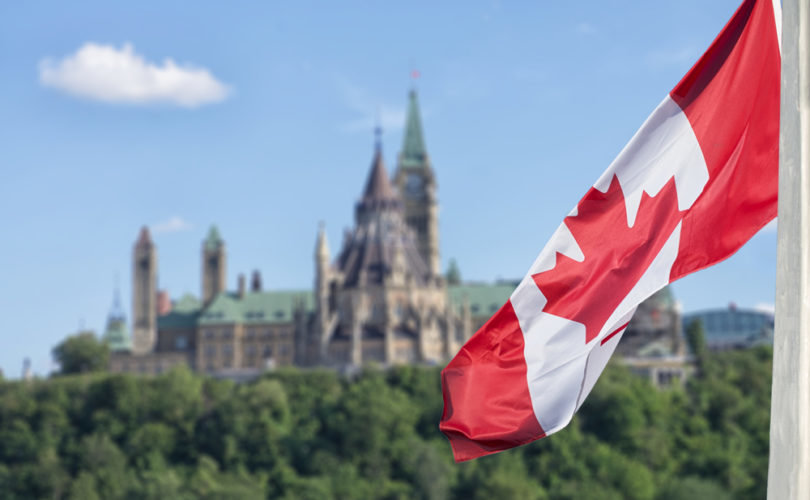 Canadian flag, with parliament in the backgroundShutterstock

OTTAWA, Ontario, June 22, 2021 (LifeSiteNews) — A controversial bill which would punish those helping children with gender confusion or unwanted same-sex attraction with jail time of up to five years passed third reading in Canada’s House of Commons today.

Led by Prime Minister Justin Trudeau, his government’s Bill C-6, often referred to as a “conversion therapy” ban, will now proceed to Canada’s Senate for review.

Bill C-6 passed with 263 votes in favor, and 63 votes against it. The bill had the support from the Liberal, New Democrat, Green, and Bloc Quebecois MPs.

With only a few days left until the Senate breaks for summer, it is unlikely Bill C-6 will be looked at or voted on by the upper chamber until the fall sitting. Nevertheless, the Senate already announced it has been introduced at first reading.

The bill has been called a “disgraceful” attack on parental freedoms by family groups.

Gwen Landolt of REAL Women told LifeSiteNews in early October that Bill C-6 is a “wicked” piece of legislation.

“While it purports to criminalize ‘conversion therapy,’ it does not target coercive and abusive practices. Rather, Bill C-6 would prevent Canadians, particularly LGBTQ Canadians, from accessing the counseling and support they voluntarily choose related to their gender and sexuality,” said Moore. “Instead, Bill C-6 imposes, with threat of criminal conviction and imprisonment, a one-size-fits-all medicalized transition approach to gender dysphoria. It further prevents LGBTQ Canadians from accessing counselling to reduce unwanted sexual behavior while allowing straight Canadians to do so.”

Last year, Jack Fonseca, Political Operations Director for Campaign Life Coalition (CLC), told LifeSiteNews that “there are no protections whatsoever in Bill C-6 for parents or pastors who, for example, discourage a gender-confused child from identifying as transgender and try to help them be at peace with the body in which they were born.”

Late last year, Bill C-6 was amended so that parents could get jail time of up to five years if they choose to continue to recognize their child’s biological sex.

At the second reading of the bill in October of 2020, Lametti essentially admitted that the federal conversion therapy ban would stop those who are consenting LGBTQ adults from being able to pay for any counseling services.

“I have been a critic of this bill from the beginning”

Ahead of the vote on Bill C-6, Sloan held a press conference today in Ottawa with a line-up of licensed psychologists and others who spoke out in opposition to it.

“I have been a critic of this bill from the beginning and I’ve articulated my concerns. I spoke to this bill yesterday in the House of Commons. I’ve put out a lengthy blog piece on my MP Derek Sloan website. And today I want to allow people to tell their story in their own words,” said Sloan this morning.

Jojo Ruba, Chief Ambassador and Communications Director for Faith Beyond Belief, spoke at Sloan’s press conference, saying that the “counseling ban is just draconian because it is one of the few jurisdictions in the world that actually bans behavioral counseling, independent of counseling, whether or not that counseling changes someone’s orientation.”

“In fact, of the 136 jurisdictions that have banned or [are] in the process of banning conversion therapy, only a few Canadian governments, all of them municipal governments or the province of Quebec, have banned behavioral counseling or are independent of orientation change. In other words, governments around the world have successfully banned harmful conversion therapy without banning helpful counseling,” noted Ruba.

According to Sloan, Ruba is “someone who freely chose counseling to reduce unwanted sexual behavior.”

“Many Canadians are presently able to seek and receive therapeutic assistance with the alleviation of numerous sex-related concerns, including intrusive sexual thoughts and fantasies such as undesired sexual thought patterns intruding in the classroom, work place, or family gatherings. They can receive assistance to reduce casual sex with any partners, assistance to reduce use of pornographic materials, assistance to reduce sexual addictions, and assistance, ability to remain faithful to a sexual partner. Canadians seek this therapeutic assistance because they reasonably believe these thoughts are creating harm in their lives. If [Bill C-6] specifically passes, these supports will only be available for non-LGBTQ people.”

Another speaker at the press conference who went by the name Renee said that while today she is a loving mother “married to an amazing man,” her life was not always this way.

“As a minor, under the age of sexual consent, I engaged in sexual activity with another girl. I hated myself and I hated being born female and I desperately needed someone to talk to. Eventually, I decided that I really needed to talk through and process these experiences and my emotions with someone. I was afraid to talk to my parents, but they loved me and accepted me and found a counselor to talk with me,” said Renee.

“The counseling was not harmful, coercive, or abusive in any way. I simply poured out my heart to the counselor about what I had done, how I felt about myself and how I wanted to move forward … This counseling was my choice, the kind of choice this government is taking away. Canadians, including youth, should have the dignity of choosing their support without government interference.”

Earlier in the year, a new poll conducted on behalf of the JCCF showed that 91 percent of Canadians agree that adults should have the “right” to get the “sexuality counselling of their choice,” regardless of the desired goal of that therapy.

The JCCF noted that the poll shows there is a “strong support” in Canada for allowing anyone who wants to overcome unwanted same-sex attraction or gender confusion to be able to attain help.