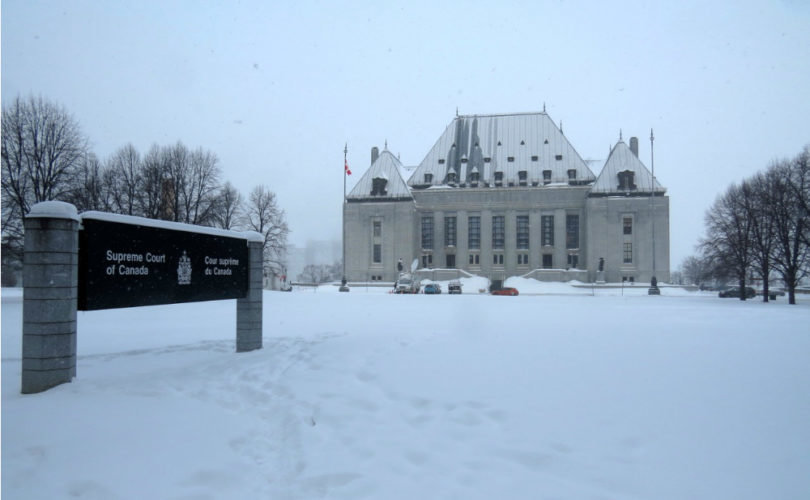 Canada's Supreme Court is covered in snow on February 6, the morning of their decision to overturn Canada's ban on physician-assisted death.Pete Baklinski / LifeSiteNews

OTTAWA, February 6, 2015 (LifeSiteNews.com) — In a momentous ruling this morning, Canada’s highest court unanimously ruled to open the door to a doctor helping kill someone nearing the end-of-life stage, a ruling comparable to the sweeping Morgentaler ruling 27 years ago that allowed a doctor to kill someone at the earliest pre-born stage of life.

In Carter v. Canada, the Court overturned a previous law prohibiting assisted suicide, in effect reversing the previous 1993 Rodriguez decision in which it said the state’s obligation to “protect the vulnerable” outweighed the rights of the individual to self-determination. The ruling makes Canada join the ranks of Switzerland, the Netherlands, and Belgium, as well as Oregon and Washington, in allowing assisted suicide.

“Section 241 (b) and s. 14 of the Criminal Code unjustifiably infringe s. 7 of the Charter and are of no force or effect to the extent that they prohibit physician-assisted death for a competent adult person who (1) clearly consents to the termination of life and (2) has a grievous and irremediable medical condition (including an illness, disease or disability) that causes enduring suffering that is intolerable to the individual in the circumstances of his or her condition,” the court stated in the 9-0 ruling that affects the lives of every Canadian who is, or may be, terminally ill.

The Criminal Code had stated that “every one who (a) counsels a person to commit suicide, or (b) aids or abets a person to commit suicide, whether suicide ensues or not, is guilty of an indictable offence.” What the court calls doctor assisted death means allowing one person, a doctor, to be directly and intentionally involved in killing another person, a patient, according to certain criteria.

The court gave the federal government 12 months to rectify what it says is a Charter violation of rights before the ruling takes effect.

Life and family leaders have reacted to the news with dismay.

“In striking down Rodriguez, our highest court told Canadians today that the lives of the weak, infirm, and vulnerable are not worth protecting. The court in essence decided that some people are better off dead than alive and gave power to those who are strong to end the lives of those who are weak. This is a terrible day of shame for Canada,” said Jim Hughes, national president of Campaign Life Coalition, to LifeSiteNews.

“We as a country have entered into utter moral blindness if we honestly believe that killing someone in the name of ‘compassion’ or ‘mercy’ is a solution to the problem of pain or debilitation. All life is a gift, and no one has the moral right to take that gift away from someone else. This law used to be called: ‘You shall not kill.’ It is always a false compassion to kill someone who is suffering. There is no dignity in killing the patient instead of the pain.”

“Legalizing assisted suicide will create new paths of abuse of elders, people with disabilities and other socially devalued people. The scourge of elder abuse in our culture continues to grow,” he told LifeSiteNews.

“The first act of Parliament must be to use the notwithstanding clause to continue to equally protect every Canadian. Then Parliament and the provincial governments must commit to providing Canadians with the care that they require and deserve.”

Critical points in the case

• April 2010 – Elected members of Parliament defeated a private members bill seeking to legalize euthanasia and assisted suicide by an overwhelming vote of 228-59, indicating the will of the Canadian people at that time.

• April 2011 – A case is launched by the B.C. Civil Liberties Association on behalf of Lee Carter, who in 2010 took her mother Kay to Switzerland where she was killed by lethal injection.

• Lee Carter, whose 89-year-old mother suffered from the degenerative condition spinal stenosis, said she knew she was breaking the law by helping her mother be killed, and wanted to fight for the option to “legally obtain, in Canada, physician-assisted dying services.” Gloria Taylor, 64, who suffered from ALS (Lou Gehrig’s disease), was eventually added to the suit. She passed away in 2012 from natural causes. While Taylor made it clear she did not intend to kill herself if the suit proved successful, she nevertheless wanted legal assurance that she could get such help if wanted.

• August 2012 – The Conservative government appeals the decision, saying that the ban exists to “protect all Canadians, including the most vulnerable members of our society.”

• October 2013 – The province’s Court of Appeal agrees and overturns the decision, stating that the lower court overstepped its authority by striking down law by judicial fiat based on the false notion that there had been an evolution in legal principles.

• June 2014 – Quebec’s National Assembly votes to become the first province to allow doctors to kill their patients as “medical aid in dying.” The Federal government states that it will “review the implications” of the decision.

• October 2014 – The Supreme Court hears arguments in Carter from both sides of the issue, including the federal Attorney-General who argued: “An absolute prohibition sends the message that all lives are valued, and worthy of protection from those who may subtly encourage vulnerable people to terminate their lives.”

Life and family leaders warn the decision has opened a pandora’s box in Canada that will bring into the country the same kind of abuses happening in other jurisdictions.

“People say that ‘safeguards’ and strict eligibility for death will offer protections,” said Hughes. “You can see just how unsuccessful this idea proved in Belgium where the categories of the killable have now expanded to include children. There’s even a booming suicide tourism now happening there. Mark my words, the same slippery slope will occur here in Canada. It’s been said before and it’s as true now as it was then: 'Once you start looking at killing as a means to solve problems, suddenly you’ll find more and more problems where killing is the only solution.'”

“Some people say there’s no such thing as a ‘slippery slope.’ Once a line has been crossed that allows one person to kill another in some instances, the qualifying criteria will just keep on expanding in the name of ‘equal rights.’ Pretty soon anybody who wants to die for any reason will be able to do so.”

In Belgium, people are being euthanized without requesting it and the list of those eligible for death has expanded to now include children. Switzerland, known worldwide as the setting for the best-loved children’s book “Heidi,” has seen its ‘suicide tourism’ double in the past five years. Over 600 non-Swiss residents traveled to the country between 2008-2012 to be killed.

The Court’s ruling casts a pall over life-affirming doctors who now have no legal framework on which to defend themselves from not partaking in killing their patients. In a foreshadowing of the Court’s decision, the Canadian Medical Association stated earlier this week that there are “occasions” where doctors helping to kill certain patients may be the most “appropriate” option. Ontario and Saskatchewan have already drafted policy that would force doctors to offer procedures to their patients despite their own religious or moral objections.

Hughes said the ruling makes the Culture of Death stronger today in Canada.

“Our court today said that strong people can kill weak ones as long as the weak ones want it. What Saint John Paul II called the ‘Culture of Death’ has like a hideous monster reared its ugly head on this day and is roaring voraciously for victims to consume,” he said.