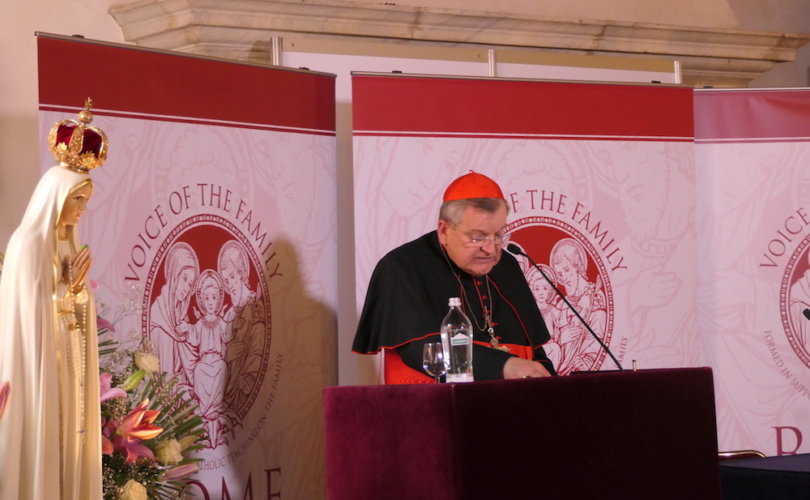 ROME, May 19, 2017 (LifeSiteNews) – Cardinal Raymond Burke issued a call this morning for the Catholic faithful to “work for the consecration of Russia to the Immaculate Heart of Mary.”

Cardinal Burke, who is one of the four Cardinals who have asked Pope Francis for a clarification of Amoris Laetitia, made his appeal at the Rome Life Forum, in the month of the centenary of Our Lady of Fatima’s first apparition to the three shepherd children.

Burke is the former prefect of the Apostolic Signatura and current Patron of the Sovereign Military Order of Malta.

In a comprehensive address on “The Secret of Fatima and a New Evangelization,” Cardinal Burke, in the presence of fellow dubia Cardinal Carlo Caffarra, outspoken Kazakhstan Bishop Athanasius Schneider and over 100 life and family leaders from 20 nations, said that the triumph of the Immaculate Heart would mean much more than the ending of world wars, and the physical calamities that Our Lady of Fatima predicted.

“As horrible as are the physical chastisements associated with man’s disobedient rebellion before God, infinitely more horrible are the spiritual chastisements for they have to do with the fruit of grievous sin: eternal death,” he said.

Read the full text of Cardinal Burke's historic call for the Consecration here.

He expressed agreement with one of the foremost Fatima scholars, Frère Michel de la Sainte Trinité, who said that the promised triumph of the Immaculate Heart of Mary undoubtedly refers firstly to “the victory of the Faith, which will put an end to the time of apostasy, and the great shortcomings of the Church’s pastors.”

Turning to the current situation in the Church in light of Our Lady of Fatima’s revelations, Burke said:

The teaching of the Faith in its integrity and with courage is the heart of the office of the Church’s pastors: the Roman Pontiff, the Bishops in communion with the See of Peter, and their principal co-workers, the priests. For that reason, the Third Secret is directed, with particular force, to those who exercise the pastoral office in the Church. Their failure to teach the faith, in fidelity to the Church’s constant teaching and practice, whether through a superficial, confused or even worldly approach, and their silence endangers mortally, in the deepest spiritual sense, the very souls for whom they have been consecrated to care spiritually. The poisonous fruits of the failure of the Church’s pastors is seen in a manner of worship, of teaching and of moral discipline which is not in accord with Divine Law.

The call for the consecration of Russia is for some controversial, but Cardinal Burke addressed the reasons for his appeal simply and straightforwardly. “The requested consecration is at once a recognition of the importance which Russia continues to have in God’s plan for peace and a sign of profound love for our brothers and sisters in Russia,” he said.

“Certainly, Pope Saint John Paul II consecrated the world, including Russia, to the Immaculate Heart of Mary on March 25, 1984,” said Cardinal Burke. “But, today, once again, we hear the call of Our Lady of Fatima to consecrate Russia to her Immaculate Heart, in accord with her explicit instruction.”

The want for the ‘explicit’ mention of Russia in the consecration as requested by Our Lady was desired by Pope John Paul II, but not undertaken due to pressure from counselors. This fact was confirmed most recently by the official representative of Pope Francis at the Fatima anniversary celebration last week in Karaganda, Kazakhstan.

Speaking on May 13, Cardinal Paul Josef Cordes, former president of the Pontifical Council Cor Unum, recalled his conversation with Pope John Paul II after the 1984 consecration, or “entrustment,” which took place March 25, when the statue of Our Lady of Fatima was in Rome.

“Obviously, for a long time [the pope] had dealt with that significant mission which the Mother of God had given to the seer children there,” Cordes said. “However, he held back to mention Russia explicitly, because the Vatican diplomats had urgently asked him not to mention this country because otherwise political conflicts might perhaps arise.”

For those who may still object to calling for the consecration of Russia, Cardinal Burke recalled the words of Pope St. John Paul II who in 1982 during his consecration of the world to the Immaculate Heart noted: “Mary’s appeal is not for just once. Her appeal must be taken up by generation after generation, in accordance with the ever new ‘signs of the times’. It must be unceasingly returned to. It must ever be taken up anew.”

Instructing the faithful, Cardinal Burke taught that Our Lady of Fatima “provides for us the means to go faithfully to her Divine Son and to seek from Him the wisdom and strength to bring His saving grace to a profoundly troubled world.”

Cardinal Burke outlined six means Our Lady gave at Fatima for the faithful take part in the restoration of peace in the world and in the Church:

“By these means, she promises that her Immaculate Heart will triumph, bringing souls to Christ, her Son,” Cardinal Burke added. “Turning to Christ, they will make reparation for their sins. Christ, through the intercession of His Virgin Mother, will save them from Hell and bring peace to the whole world.”