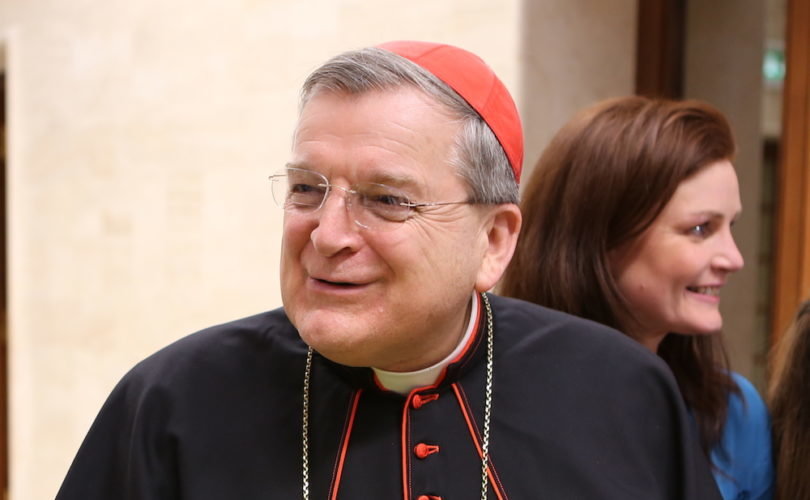 “The Church has historically been sensitive to the erroneous tendency to interpret every word of the pope as binding in conscience, which, of course, is absurd,” he wrote in an article published by the National Catholic Register today. “Pope Francis makes clear, from the beginning, that the post-synodal apostolic exhortation is not an act of the magisterium.”

Burke adds that the Church takes care that “a personal reflection of the Pope, while received with the respect owed to his person, is not confused with the binding faith owed to the exercise of the magisterium.”

“Certain commentators confuse such respect,” which is rightly due to the Pope, “with a supposed obligation to ‘believe with divine and Catholic faith’ (Canon 750, § 1) everything contained in the document,” says Burke. “But the Catholic Church, while insisting on the respect owed to the Petrine Office as instituted by Our Lord Himself, has never held that every utterance of the Successor of St. Peter should be received as part of her infallible magisterium.”

Cardinal Burke calls on the Church to make clear that the Pope’s personal opinions are not magisterial. “While the Roman Pontiff has personal reflections which are interesting and can be inspiring, the Church must be ever attentive to point out that their publication is a personal act and not an exercise of the Papal Magisterium.”

The Cardinal warns that a failure to make the distinction between the Pope’s personal opinion and magisterial teaching “is harmful to the faithful and weakens the witness of the Church as the Body of Christ in the world.”

According to Cardinal Burke the exhortation cannot be interpreted as a “revolution in the Church, as a radical departure from the teaching and practice of the Church,” since, “the only key to the correct interpretation of Amoris Laetitia is the constant teaching of the Church and her discipline that safeguards and fosters this teaching.”

“Such a view of the document is both a source of wonder and confusion to the faithful, and potentially a source of scandal not only for the faithful but for others of good will who look to Christ and his Church to teach and reflect in practice the truth regarding marriage and its fruit, family life, the first cell of the life of the Church and of every society.”