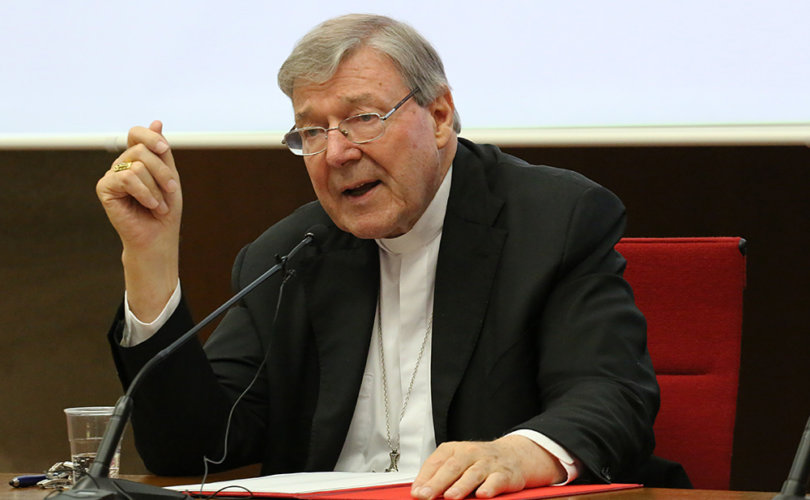 MELBOURNE, Australia, August 20, 2019 (LifeSiteNews) – Judges of the Victorian Supreme Court in Australia ruled that Cardinal George Pell, convicted of and jailed for child sex abuse, will return to prison after they upheld his conviction, dismissing his appeal.

The state of Victoria’s Supreme Court Chief Justice Anne Ferguson, Justice Chris Maxwell, the president of the Victoria Court of Appeal, and Justice Mark Weinberg handed down the 2:1 decision. Ferguson read a summary of their conclusions.

In her statement (read full summary judgment here), the Supreme Court Chief Justice said that it was “fair to say that this case has divided the community.”

“Cardinal Pell was guilty of the offenses charged,” she ultimately said.

Pell will continue to serve his sentence of 6 years' imprisonment, the court ruled. “He will remain eligible to apply for parole after he has served 3 years and 8 months of his sentence. Whether Cardinal Pell will be released on parole will be a matter for the Adult Parole Board, not the Courts,” the summary judgment document stated.

The verdict was live-streamed by the Supreme Court of Victoria.

On December 11, 2018, Cardinal George Pell was found guilty of two counts of child sex assault by a jury after only four days of deliberation. A second planned trial was dropped in February 2019, due to a lack of evidence and because one of Pell’s principal accusers had died. In March 2019, Justice Peter Kidd sentenced Pell to six years in prison, with no chance of parole for three years, eight months.

Pell has always maintained that he is innocent of all accusations of child sexual abuse.

Pell’s legal team brought the appeal to the Court of Appeal in a two-day hearing in early June. Hopes for the Cardinal’s exoneration were raised by reports that the defense had made a positive impression upon the Justices.

Barrister Bret Walker, the head of Pell’s defense team, argued that the jury was mistaken in finding Cardinal Pell guilty of assaulting two choirboys and that there are 13 obstacles to his conviction that should have been taken into account.

One of his main arguments was that Cardinal Pell was meeting parishioners at the western door of St. Patrick’s Cathedral in Melbourne in December 1996, at the time the prosecution charged the abuse took place in the sacristy.

“If he was at the western door then the law of physics means this is literally and logically impossible for the offending to have occurred,” Walker said.

There was only one witness to testify that the crimes ever did occur; the second former choirboy in the case had died of a drug overdose after denying that the abuse had happened. The complainant was also the only witness of the second case of abuse for which Pell was found guilty: an incident in which the complainant said that Pell had groped him in the midst of a large choir, in a corridor crowded with choirboys, in the presence of at least one other priest.

Ferguson and Justice Maxwell rejected all 13 arguments of Pell’s defense for an appeal. Oddly, she and Maxwell examined Pell’s vestments and decided that they would not have impeded him in sexually abusing the choirboys.

The ‘Get Pell’ Operation

The Cardinal’s personal legal troubles began in 2013 when Victoria’s police department set up “Operation Tethering.” This was a mission to find evidence against Pell even though no-one had made a formal complaint against him. Later, when asked at Pell’s committal hearing if this had been a “get Pell operation,” Detective Superintendent Paul Sheridan said, “I wouldn’t use those words, but I guess you could term it the way you did.”

2013 was also the year Cardinal Pell began to work for the Vatican’s new Secretariat for the Economy. He was appointed as the Prefect of the Secretariat by Pope Francis in 2014. He was also called upon to give evidence before the ongoing Australian Royal Commission investigating child sex abuse in religious denominations.

By 2016, Pell was struggling with rival interests in the Vatican, having found tens of millions of unaccounted-for euros in accounts belonging to various Vatican departments, with the Australian media, and with the Victoria police. When a newspaper reported that he was being investigated for “multiple offenses,” Pell denied it and suggested an inquiry into the Victoria police. He believed that they had fed the story to the press to discredit him before the Royal Commission.

In April 2016, the Secretariat for the Economy “pulled the plug” on an ongoing external audit of the Vatican finances without telling Pell. It was reported that certain people in the Holy See were concerned that the cardinal was doing his work too well.

“They’re afraid of the audit uncovering information they don’t want uncovered and are worried about losing sovereign control over Vatican finances,” a source told a reporter for the National Catholic Register. “What they want is to get rid of Cardinal Pell […].”

In July of that year, Victoria police announced that a complaint had been made against Pell, and detectives flew to Rome that October to interview him about this and other allegations.

In May 2017, Pell both resisted a power play by the Vatican’s Administration of the Patrimony of the Apostolic See over his and other dicasteries, and in June he was charged with several sexual offenses. Instead of declaring diplomatic immunity, he returned to Australia to confront his accusers.

In May 2018, Pell was told to face trial, even though most of the charges against him were dismissed. Two trials were planned: the first in regards to accusations that Pell had molested two choirboys in Melbourne Cathedral in the 1990s, and the second concerning charges that Pell had fondled boys in a Ballarat public swimming pool in the 1970s.

His first trial was held on August 15, 2018, but as the jury could not come to an agreement, it ended in a mistrial. The retrial began on December 6 under a press blackout.

Today’s decision does not end Cardinal Pell’s long march through the Australian courts. The hopes of Cardinal Pell’s supporters are not entirely dashed, for his legal team plans to take today’s ruling to the High Court.