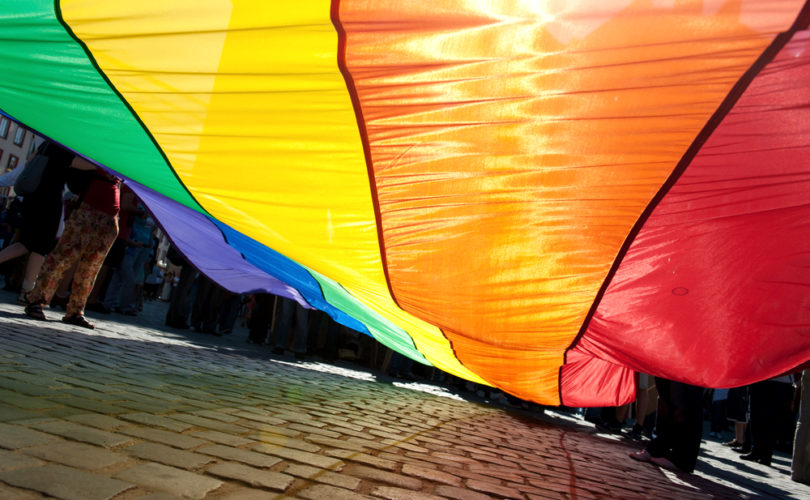 BALTIMORE, MD, June 3, 2015 (LifeSiteNews.com) — More than six weeks after a report surfaced of a Catholic Relief Services senior employee living in a homosexual “marriage” and publicly advocating homosexuality, the executive is stepping down, and the relief agency maintains there is no issue with its Catholic identity.

“CRS is an organization with close ties to the U.S. Conference of Catholic Bishops, and our Catholic identity is at the heart of our mission,” the organization said in a statement published today in the National Catholic Register. “We are resolute in our commitment to the Church and all its teachings, and we work in countless ways to support marriage and family life.”

The statement says that Rick Estridge, vice president for overseas finance for the official overseas relief and development agency of the U.S. Conference of Catholic Bishops, made the decision to leave CRS “because of the stress this situation has [him] and his family.”

CRS was largely silent after the information initially became public. Almost a month after the report, CRS President and CEO Carolyn Woo questioned in an interview whether it was clear that the Church should not employ someone in a homosexual “marriage,” especially when the employee works in a non-ministerial position or in an area not directly related to the faith formation of young children in school.

“CRS has a senior person who is in a civil gay marriage,” Woo said at the time, “and the question is, ‘Is that a violation of Church teaching?’”

CRS defended its decision to have an executive living in violation of Church teaching in its statement on Estridge’s resignation, with the same rationale put forth by Woo, and made mention that marriage had been legally redefined in the state where CRS is located.

“Mr. Estridge was a valued employee of CRS for 16 years,” the CRS release said. “He held a technical finance position that did not involve mission-related decisions. Because of that, CRS did not require that position to be held by a Catholic, and Mr. Estridge is not Catholic. He entered into a same-sex civil marriage two years ago, when doing so became legal in Maryland.”

CRS also suggested in its statement that the problem at hand is with those bringing forth concerns about its Catholic identity.

It referred to the source of the report on Estridge as “a self-described Catholic defense group,” and cast the report as a personal attack.

“We detest hurtful campaigns that do not build up, but undermine, individuals and Church agencies carrying out the mission of bringing the love of Jesus Christ to those who are suffering,” CRS stated.

Catholic Relief Services has long been the subject of concern over its collaboration with groups that promote anti-Catholic causes, including abortion, and its support for programs containing elements that violate Church teaching on issues such as contraception.

CRS’s statement on Estridge persisted in its claim of upholding Catholic principles.

“Our board of directors and executives regularly review programs, policies and practices to ensure that these uphold our Catholic identity,” it said.

According to Steven Mosher, president of the Population Research Institute, it's essential that Catholic organizations hire Catholic employees. “Like every other Catholic organization, CRS should hire faithful Catholics, let them know that it expects them to behave with fidelity to the teachings of the Church in their private as well as their public lives,” he said. “This requirement should be embedded in contracts, repeated in job descriptions and communicated openly, explicitly and repeatedly to employees.”

“CRS Vice President Rick Estridge's resignation notwithstanding, this is still, as far as I can determine, not CRS policy. Until it is, these kinds of problems will continue and faithful Catholics will be compelled, in charity, to point this out,” he added. “I do not enjoy doing this, but I would enjoy far less the specter of souls going to Hell.”

CRS’s statement puzzled Michael Hichborn of the Lepanto Institute, which produced the report on Estridge. “Considering that Rick Estridge was not only in a same-sex ‘marriage,’ but actually viciously attacked politicians who fought against same-sex ‘marriage,’ I find it strange that CRS would level so much praise for him,” Hichborn told LifeSiteNews.

CRS president: It may not be wrong for us to have a VP in a gay ‘marriage’