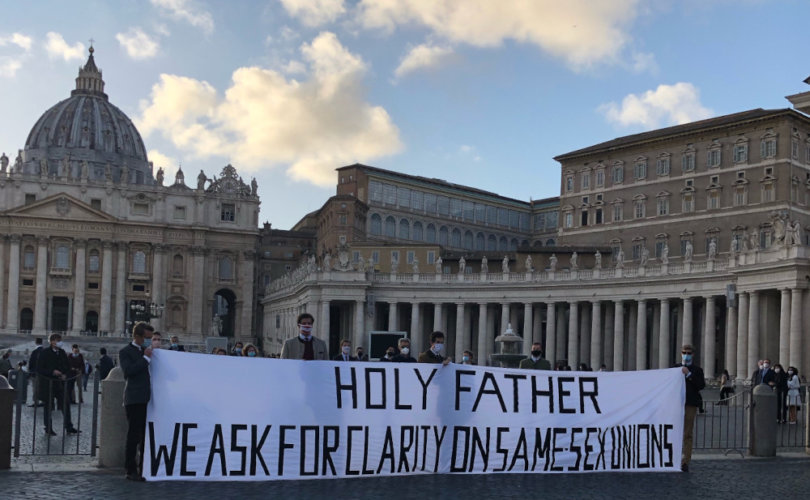 VATICAN CITY, October 24, 2020 (LifeSiteNews) ― Just a few hours ago, a group of young Catholics gathered in St. Peter’s Square in Rome, asking Pope Francis “for clarity on same-sex unions.” In a documentary released earlier this week, the Holy Father had expressed his support for homosexual civil unions.

Led by Alexander Tschugguel, known as the Pachamama dunker, the young people of Austria’s St. Boniface Institute gathered in St. Peter’s Square today with a banner reading, “Holy Father, we ask for clarity on same-sex unions.”

They were joined by a number of Catholics from other countries who knelt in the piazza, silently praying the rosary together.

After Roman police asked Tschugguel to put away the banner, he joined the others in prayer and led them in the “Salve Regina.” Then a priest led the group in the Angelus prayer.

Vatican police confront @ATschugguel for holding up a banner that reads, “Holy Father, we ask for clarity on same-sex unions.” pic.twitter.com/6ttLTmq9YB

One of the faithful praying in the square told LifeSiteNews that Tschugguel and many of the other Austrians had driven all night to reach the Vatican today.

Tschugguel, 27, is famous among Catholics for an event at the Ponte Sant’Angelo, a short walk from the Vatican, last October: Horrified by the presence of a number of statues identified with the pagan earth goddess Pachamama in a Catholic church near the Vatican, Tschugguel carried them out, took them to the bridge, and threw them in the Tiber.

The statues were also involved in several religious ceremonies and events with Pope Francis present.

Earlier today, Tschugguel told reporters that this time, he and the St. Boniface Institute were there for a completely different reason.

— Article continues below Petition —
PETITION: Ask Pope Francis to clarify and rectify scandalous remarks on homosexual civil unions
Show Petition Text
22745 have signed the petition.
Let's get to 25000!
Thank you for signing this petition!
Add your signature:
Show Petition Text

“Today, we find ourselves here in front of the Holy Angel’s Bridge in front of the Castel Sant’Angelo again,” he said. “This year, I am standing here because there was an interview published where the Holy Father asked for the introduction of civil unions in different political states.”

Tschugguel said such interviews have been a problem since the beginning of the present pontificate for faithful Catholics because the enemies of the Church use them to fight against the faith and advance an anti-Catholic agenda.

“This has happened again here,” he said.

.@ATschugguel speaking in St. Peter's Square on why he and other young Catholics are asking the Pope to clarify remarks on civil unions. pic.twitter.com/IqIq2ufErw

“For example, the President of Venezuela, Nicolás Maduro, said that now, encouraged through these words of the Holy Father, he’s going to introduce homosexual ‘marriage’ in Venezuela,” he continued.

“An Austrian bishop said that he’s very happy that the pope is [commending] something that is 100% introduced in Austria already. By that I think he means homosexual ‘marriage,’ which was introduced last year.”

The young Austrian asked for clarity, reflecting on the controversy around the documentary “Francesco,” which apparently featured the Pope’s approval of same-sex civil unions, but was allegedly also selectively edited. Some have argued the pontiff’s remarks were not translated correctly, either.

“We don’t know what the Holy Father really said, but now we are here to ask the Holy Father: Please, please, bring us clarity on homosexual unions. Please go out to the cameras, please go out to the microphones to explain to the people how you really meant this and what the context of … this interview was, and how the Catholic teaching is still the Catholic teaching.”

He added, “We ask you, Holy Father, what is the Catholic teaching on homosexual civil unions?”

Tschugguel told LifeSiteNews that some the Austrian bishops support the activities of the St. Boniface Institute, while others do not.

“But that’s not really a problem for us,” he laughed. “We think that to serve God’s will we have to do what is right and lawful. And also, what I do now, today, here, is not about me as a person … but about the One True Faith.”

“Yes I have support from them.” pic.twitter.com/QROp5uBLZf

The young man said that he has a lot of support among young Austrian Catholics and Austrian priests.

Others are a little more cautious, telling Tschugguel that they are big fans of what he does, while asking him not to tell anyone else.

“So we see there’s still a policy of fear among the priests, but I see change. The young priests are normally way more faithful than the so-called ’68-generation priests.”

He clarified that there are “wonderful” priests among the now-elderly generation, but that, given the times, it’s really a “miracle” when someone wants to live a celibate life and become a priest.

The married Catholic layman said that “gay civil unions” were a “first step” in the LGBT agenda, and alluded to the statement of LGBT activist-priest Fr. James Martin, SJ, that Pope Francis’ alleged approval of them “is a major step forward in the church’s support for LGBTQ people.”

“What is the next step?” Tschugguel wondered.

“So that’s not the discussion. The discussion is really and clearly that what he said in this interview is used to promote an LGBT agenda, first introducing a gay civil union and afterwards introducing homosexual ‘marriage.’”

Tschugguel noted that in the past Pope Francis has spoken out against such LGBT agenda items as homosexual adoption. Right now, however, the media is telling us he is supporting the ideology, and that this is not good for the reputation of the pope and insults God, Tschugguel explained.

“It is an offense to God if people use quotes from the Holy Father, his vicar on earth, to fight against the one true teaching,” he said.

The young Catholic also quoted from a Congregation of the Doctrine of the Faith’s 2003 document, signed by the then-Cardinal Ratzinger, now Pope Emeritus Benedict XVI, called “Considerations regarding proposals to give legal recognition to unions between homosexual persons.”

“I think that’s very right,” he added, and pointed out that there are already measures in place to allow people to choose friends to visit them in hospital or inherit their money.

“So what is the reason we should introduce gay civil union? There is no reason.”

The St. Boniface Institute has taken part in other public demonstrations of faith in opposition to clerics currying favour with LGBT activists. Last November the group held a rosary rally outside Vienna’s St. Stephen’s Cathedral to protest a pro-LGBT benefit concert starring a drag queen taking place inside. In January 2020, the group joined other Catholics, including Archbishop Carlo Maria Viganò, in Munich to protest Cardinal Reinhard Marx and the German bishops “Synodal Path.”