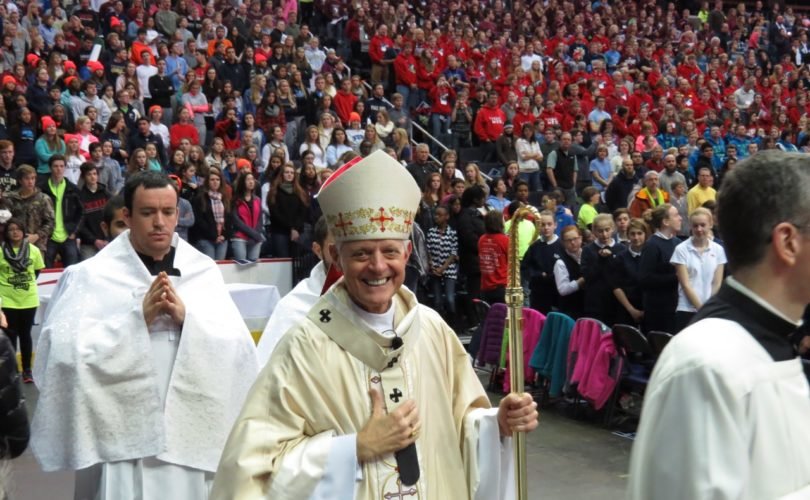 WASHINGTON, D.C., January 16, 2019 (LifeSiteNews) – Embattled Cardinal Donald Wuerl will not celebrate the Archdiocese of Washington’s January 18 Mass for Life, which is scheduled to occur before the annual March for Life. Instead, Archbishop Christophe Pierre, apostolic nuncio to the United States, will be the principal celebrant. Also celebrating the Mass will be Auxiliary Bishops Mario Dorsonville and Roy Campbell.

The archdiocese confirmed that Wuerl will not be the celebrant but would not elaborate as to his reasons for declining to participate, according to CNA.

The archdiocese’s Mass for Life and Youth Rally come in the morning hours before the annual March for Life. Cardinal Wuerl has offered the pass in past years.

The archdiocesan communications office did not respond to multiple emails and a telephone call by LifeSiteNews requesting comment.

In October, Pope Francis accepted Wuerl’s resignation in the wake of reports over his connection to the sex abuse crisis that rocked the U.S. church last summer. However, Wuerl (78) continues to run the archdiocese as apostolic administrator until the Pope names a successor.

There have been increasing calls for Wuerl to step away from the Mass for Life, which is primarly attended by youth, because of his handling of abuse allegations against Archbishop Theodore McCarrick, his predecessor. Also, Wuerl has been the focus of criticism ever since the release of an August 2018 report from a Pennsylvania grand jury about his record as bishop of the Diocese of Pittsburgh and handling of abuse cases there.

A pro-life advocate in Texas told LifeSiteNews that it would be a blemish on the March for Life to have Cardinal Wuerl celebrating the Mass for youth.

“It would communicate that some of the leaders in the church, who are supposed to represent Jesus Christ, think that they can get away with sexual crimes against them. We faithful Catholics are saying, 'No this cannot continue to happen. These sexual crimes and cover-ups of these crimes are a huge deal.' The harm done by them [is] massive and have destroyed people’s lives forever. It’s time for the Church to take a stand and show respect for the victims and those faithful who remain and those who are thinking of leaving the Church because of these scandals and how they continue to get swept under the rug,” the source said.

Having Wuerl participate would be a “slap in the face for victims of sexual abuse. It would communicate to them that there is no justice, and the Catholic Church does not care for them, which victimizes them all over again.”

This Friday, the Mass for Life and Youth Rally will take place at the Capital One Arena, formerly the Verizon Center, where 20,000 participants are expected. Pro-life leaders will give their testimonies, and there will also be musical performances.

Cardinal Wuerl apologized in a January 15 letter for what he called a “lapse of memory” regarding what he did and didn’t know about abuse allegedly committed by former Cardinal Theodore E. McCarrick. McCarrick stepped down from the College of Cardinals in July 2018.

Wuerl acknowledged in the letter to archdiocesan priests that he was made aware of the allegation against McCarrick after receiving a report in 2004 about a different allegation. He claimed that the “survivor also indicated that he had observed and experienced 'inappropriate conduct' by then-Bishop McCarrick.”

Cardinal Wuerl said that when he was bishop of Pittsburgh in 2004, a report by the Pittsburgh Diocesan Review Board informed him about a separate case and “at the conclusion of this report, the survivor indicated the 'inappropriate conduct'” he observed by McCarrick.

In the January 15 letter, Wuerl claimed that the Pittsburgh survivor had asked that the matter be kept confidential. Stating the he heard no more about the matter, he wrote, “I did not avert to it again,” and “only afterwards was I reminded of the 14-year-old accusation of inappropriate conduct which, by that time, I had forgotten.”

Abuse victim and former priest Robert Ciolek has said that he has seen evidence that Wuerl himself forwarded Ciolek’s accusation against McCarrick to the Vatican officials in the U.S. in 2004. The Diocese of Pittsburgh issued statements last week which admitted that Wuerl (who was bishop of Pittsburgh from 1988-2006) did, in fact, know about “inappropriate activity involving … Archbishop Theodore McCarrick.” Ciolek has accused McCarrick of misconduct during the time that Ciolek was a seminarian and priest in New Jersey during the 1980s. Ciolek has said that he wants to meet with Wuerl and urge him to tell what he knew about McCarrick.

In the January 15 letter, Wuerl wrote that he apologized to this survivor of abuse “for any of the pain and suffering he endured” from the alleged abuse and “from the actions of then-Bishop McCarrick.” Wuerl wrote, “it is important for me to accept personal responsibility and apologize for this lapse of memory. There was never the intention to provide false information.”