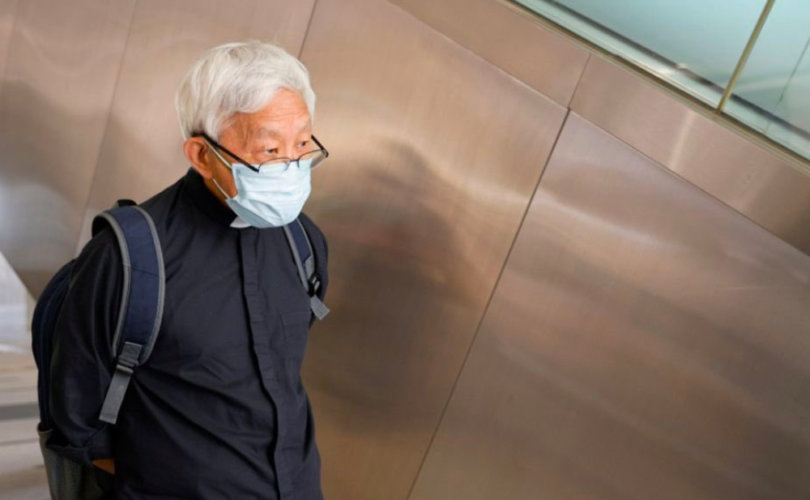 HONG KONG (LifeSiteNews) — The emeritus bishop of Hong Kong, Cardinal Joseph Zen, has been deemed guilty by the West Kowloon Magistrates’ Court in Hong Kong of having failed to properly register the now-defunct 612 Humanitarian Relief Fund, and fined HK $4,000 ($512). He will not face further penalties for this ruling.

Local news outlets reported Friday that the 90-year-old Catholic prelate, along with four other trustees and a secretary at the 612 Fund, must pay the fine as the Fund had not bee registered within the required one-month timeline. According to local law, organizations must be registered with the police commissioner within one month of being set up. Failure to do so can lead to an initial fine of HK$10,000 (around $1,200).

The cardinal and his four fellow trustees will now have to pay the HK$4,000 fine, while the secretary Sze Ching-wee will have to pay a fine of HK $2,500. All six had pleaded not guilty to the charges.

Handing down the ruling, principal magistrate Ada Yim said that the 612 Fund “had political objectives and thus it was not established solely for charitable purposes,” thus holding that it did not qualify for an exemption to the requirement for registration.

He expressed the hope that “although I’m a religious figure, I hope this (case) won’t be associated with our freedom of religion. It’s not related.”

Margaret Ng stated afterwards that today’s ruling was the first time that residents had faced charges for failing to register a society. “The effect to other people, to the many, many citizens who are associated together to do one thing or another, and what will happen to them, is very important,” Ng said. “It is also extremely important about the freedom of association in Hong Kong under Societies Ordinance.”

Reuters further reported that despite today’s verdict, Zen could yet face further prosecution as police investigate “an accusation of ‘collusion with foreign forces.'”

Catholics and China experts have highlighted the cardinal’s ongoing trial since his arrest in May, and political bodies have even taken the Vatican to task for not offering more support to Zen. Mainstream media outlets have also condemned both the Hong Kong authorities for the trial, and the Vatican for not supporting Zen.

To widespread international outrage, Zen was arrested in May under the terms of the draconian 2020 National Security Law, along with fellow trustees of the now defunct 612 Humanitarian Relief Fund, who joined him in court.

The 612 Fund was established to offer “legal, medical, psychological, and emergency financial assistance” to those involved in the 2019 protests against the government’s Extradition Law Amendment Bill, which sought to allow prisoners to be transferred to mainland China for trial.

While initially being arrested due to alleged breaches of the National Security Law (NSL), Zen was later tried for failing to apply properly for registration for the 612 Fund, which carries a lesser offence than the life-long jail term possible for violating the NSL. Failure to register should normally lead to an initial fine of HK$10,000 (around $1,200).

The NSL was enacted June 30, 2020, prompting mass protests among residents, and has been widely criticized by many, including pro-abortion Amnesty International. According to the BBC, the still-secret law “criminalize[s] secession, subversion and collusion with foreign forces,” while Amnesty argues that those charged under the law are “effectively presumed guilty rather than innocent.”

It can also “effectively curtail protests and freedom of speech” and applies to anyone on Hong Kong soil, regardless of citizenship.

In a 2020 EWTN interview, Zen said the new law makes it easier for the Chinese Communist Party to go after city protestors and further erodes the independence of Hong Kong. Summarizing, the cardinal stated: “It’s easy to tell you in just one sentence: ‘Now they can do anything.’”

According to the South China Morning Post (SCMP) prosecutors argued during Zen’s trial that, due to its “massive” size and “systematic” operations, the 612 Fund needed to be registered with the police. Legislation requires a society to register with the police commissioner within one month of being set up, as failure to do so can lead to an initial fine of HK$10,000 (around $1,200).

However, Zen’s lawyers argued that “to impose criminal sanctions on the failure to register [under the Societies Ordinance] is an infringement of freedom of association.”

Police have been investigating the 612 Fund since September 2021, alleging that it breached the national security law. The 612 Fund announced in late 2021 that it would cease operations as of October 31, 2021, partly due to the new security law, but also because the bank holding the money raised by donations to the Fund had “frozen” the money.

The Vatican has been notable in its lack of support of the beleaguered cardinal. When pressed, officials at the Holy See have been noncommittal at most regarding the plight of the 90-year-old cleric. Both Pope Francis and Vatican Secretary of State Cardinal Pietro Parolin have signalled their allegiance with China, rather than with Zen.

Against the backdrop of the 612 Fund’s activities and Zen’s trial comes the second renewal of the Vatican’s secretive deal with Communist China. Zen has long been a vocal critic and opponent of Pope Francis’ deal, even accusing Francis of “encouraging a schism,” of “selling out the Catholic Church in China,” and styled the deal “an incredible betrayal.”

He also suggested that the Vatican’s silence over China’s long record of human rights’ abuses and persecution of the Church was perhaps an attempt “to establish diplomatic relations with (China).”