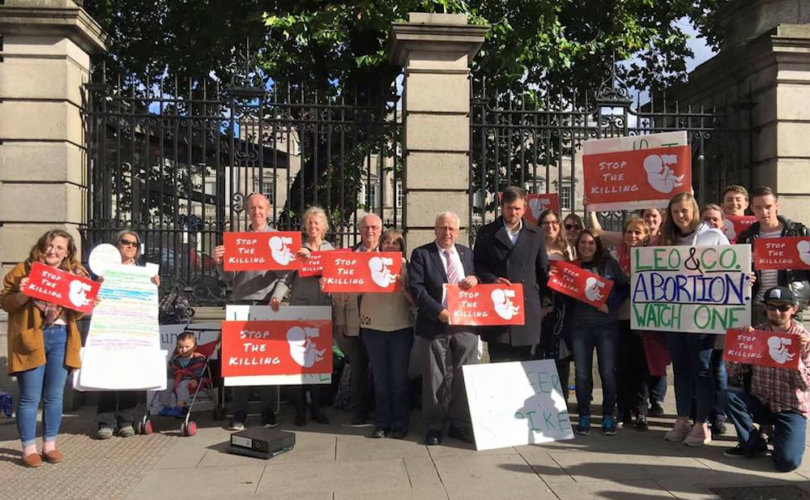 Tim Jackson is joined by supporters during his hunger strike.

DUBLIN, Ireland, September 22, 2017 (LifeSiteNews)  The chairwoman of the Irish parliament’s Committee on Abortion responded to a pro-life hunger striker’s request that the Irish Taoiseach and the Committee watch a video of an abortion procedure.

Senator Catherine Noone wrote to Tim Jackson this morning, the fifth day of his protest, to say she watched the video of an abortion and “the Taoiseach has no difficulty watching it.”

In a press release, Jackson said, “Although the correspondence is a step in the right direction, I will keep [fasting] until the committee watch the video together in session. There is no other way of verifying if they all have watched it.”

Jackson, who began his fast on Monday, says his body is weakening, but he is determined that the committee must be fully informed of what happens to the unborn child during an abortion.

“I think the least we can all do is know exactly how the child is killed,” he said. “It unmasks the reality of abortion in a debate clouded with euphemisms.”

The video Jackson has asked the committee to see is available for viewing at whiteflagmovement.com.

Ireland’s Taoiseach (or prime minister), Leo Varadkar, plans to hold a national referendum that could overturn Ireland’s constitutional protections for the unborn.

Senator Noone told LifeSiteNews that she found the video, which she had seen before, “informative.”