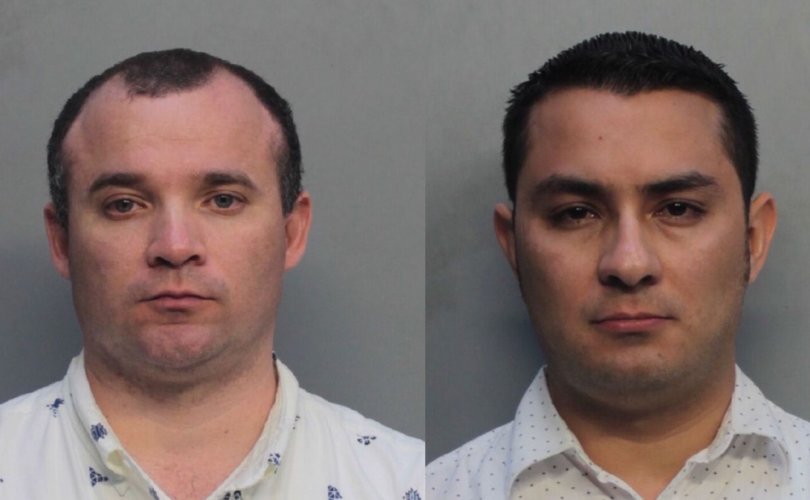 UPDATE, September 4, 2018 at 6:26 p.m. EST: The Archdiocese of Chicago announced Cardinal Cupich has removed Fr. Berrio from ministry and suspended his priestly faculties. Its statement indicates Fr. Giraldo Cortes (whose name is spelled differently on the Miami beach police report) is an “extern priest” from Soacha, Colombia. The first sentence of the below article has been updated to reflect that.

Here is the archdiocese’s full statement:

We were informed this morning that Rev. Diego Berrio, pastor of Misión San Juan Diego in Arlington Heights, Ill., and Rev. Edwin Giraldo Cortes, an extern priest from Soacha, Colombia who served at St. Aloysius Parish in Chicago for one month, August 1 to August 31, 2018, were arrested in Miami on September 3, 2018. Fr. Berrio was charged with a misdemeanor charge of lewd and lascivious behavior. Fr. Cortes was charged with misdemeanor charges of lewd and lascivious behavior and indecent exposure.

Cardinal Blase J. Cupich, archbishop of Chicago, has removed Fr. Berrio from ministry and withdrawn his faculties to minister in the Archdiocese of Chicago, effective immediately. The archdiocese will appoint an administrator for the Misión San Juan Diego as soon as possible.

Archdiocese representatives have been in contact with Fr. Cortes’ home diocese of Soacha, Colombia and informed them that Fr. Cortes will not be granted additional faculties to minister in the Archdiocese of Chicago.

It is our responsibility to ensure those who serve our people are fit for ministry. We take this matter very seriously and will provide updates as they become available.

MIAMI, Florida, September 4, 2018 (LifeSiteNews) – Two Archdiocese of Chicago priests – one incardinated there and one “extern priest” from Colombia – were charged with lewd and lascivious behavior after being arrested on Labor Day for allegedly engaging in oral sex in a car on a busy street.

The priests are Father Diego Berrio, 39, and Father Edwin M. Giraldo-Cortez, 30. Fr. Berrio is the spiritual director and canonical adviser for a youth group called Iskali. According to its website, 35 percent of its members are between the ages of 15 and 18 and 55 percent are 19 to 30 years old. Iskali runs “faith awakening retreats” and “seeks to provide a culturally sensitive evangelization experience to evangelize young Hispanics in the U.S.,” according to its website.

The priests live together at 2323 North Wilke Road in Arlington Heights, a Chicago suburb, at the Mission of San Juan Diego. Berrio is the pastor there.

“Yesterday at 3:20 p.m., our officers responded to a 911 call reporting that two males were performing a sexual act inside a car in the 1300 block of Ocean Drive,” Ernesto Rodriguez, a Miami Beach Police spokesperson, told LifeSiteNews. “Officers approached the car and observed the reported conduct occurring inside the car.”

The responding police officer wore a body camera, which recorded the incident.

The police report says: “The [sexual] act was occuring in full view of the public passing by on Ocean Drive and the sidewalk. It should be noted that the vehicle’s windows were completely clear (no tints/sunscreening material.)”

Berrio was engaged in a sexual act with Giraldo-Cortez, who was sitting in the driver’s seat. Giraldo Cortez faces an additional charge of indecent exposure because his genitalia was fully exposed.

The priests “did not immediately notice my presence,” the police officer who responded to the 911 call wrote in his report. “To get their attention, I was forced to knock on the window.”

They were arrested “without incident,” according to the police report. The charges they face are misdemeanors.

Berrio has only been a priest since 2008.

In 2015, a priest at the same Mission of San Juan Diego where Berrio and Giraldo-Cortez live was charged with reproduction of and possession of child pornography.

As of 3:14 p.m. EST, the website of the Mission of San Juan Diego had crashed. An error message said the crash was “due to maintenance downtime or capacity problems.”

Alejandro Castillo of the Archdiocese of Chicago’s media relations office told LifeSiteNews the archdiocese is working on a statement that will be released soon. LifeSiteNews will post that statement as soon as it is made public.

The Archdiocese of Chicago is led by Cardinal Blase Cupich, a Pope Francis appointee who according to Archbishop Carlo Vigano owes his rise to power and prominence during this pontificate to disgraced sex abuser ex-Cardinal Theodore McCarrick.

“Regarding Cupich, one cannot fail to note his ostentatious arrogance, and the insolence with which he denies the evidence that is now obvious to all: that 80% of the abuses found were committed against young adults by homosexuals who were in a relationship of authority over their victims,” Vigano, the former U.S. apostolic nuncio, wrote in his 11-page testimony on the cover-up of McCarrick’s predation (emphasis in original).

“During the speech he gave when he took possession of the Chicago See, at which I was present as a representative of the Pope, Cupich quipped that one certainly should not expect the new Archbishop to walk on water,” Vigano said. “Perhaps it would be enough for him to be able to remain with his feet on the ground and not try to turn reality upside-down, blinded by his pro-gay ideology, as he stated in a recent interview with America Magazine.”

The Catholic Church teaches that homosexual acts are “intrinsically disordered.”

“They are contrary to the natural law,” it says. “They close the sexual act to the gift of life. They do not proceed from a genuine affective and sexual complementarity. Under no circumstances can they be approved” (CCC 2357).

Father James Martin, S.J., who Cardinal Cupich has defended as the “foremost evangelizer” of youth, has called for homosexual priests to “come out.”

“I would estimate about 30 to 40 percent of priests are celibate, gay priests, a ballpark figure, and if they did come out, their parishioners would see how normal it is to be LGBT,” Martin told the Bay Area Reporter.