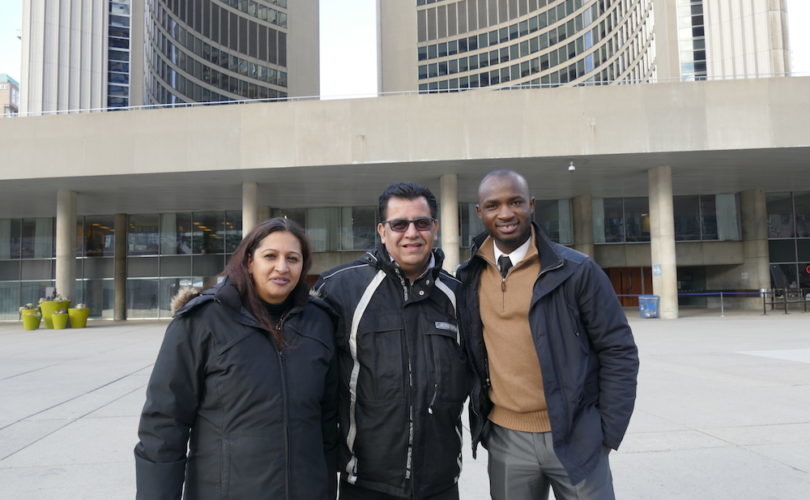 Voices of the Nations' Beena and Peter Ruparelia and Leye Oyelami outside Toronto City Hall February 4. Yonge-Dundas management board had just agreed to give VOTN a permit to use the square August 6.Lianne Laurence / LifeSiteNews

TORONTO, February 4, 2016 (LifeSiteNews) – Voices of the Nations has won the right to hold its annual music festival in Toronto’s Yonge-Dundas Square, after a dispute blew up last October when the square’s management refused the Christian organization a permit on the grounds it had previously proselytized in contravention of a city bylaw.

“I believe it’s a victory for all Christians,” Voices of the Nations’ director Peter Ruparelia told LifeSiteNews, likening the fight to a “David and Goliath” struggle.

“We can now say the name of ‘Jesus ‘in the public square,” added his wife Beena.

Credit for the victory goes to the Calgary-based Justice Centre for Constitutional freedoms, and its lawyer, Marty Moore, noted Ruparelia.

That the Yonge-Dundas Square management board reversed its decision “is good news for freedom of expression for all groups,” Moore told LifeSiteNews in a telephone interview.

It’s a particular triumph for the members of VOTN, who have defended their “freedom to express their religious beliefs.”

JCCF took up the case in late October, issuing a “letter of intent” to sue the City of Toronto and the Yonge-Dundas Square management board for violating VOTN’s charter rights of freedom of religion and expression.

But in December the YDS board agreed to negotiate with VOTN. Since then, Moore and City of Toronto lawyer Ian Duke have hammered out a “document of understanding,” specific to VOTN and its Christian music event.

According to the lengthy and detailed agreement of understanding, performers at the one-day Christian music and dance festival can “sing any song” they want, and “even pray from the stage” said VOTN’s event coordinator Leye Oyelami.

Scripture reading and testimony is likewise permitted — as long as these these acts of public praise and worship occur “in the context of the performance,” he added.

VOTN can also have a prayer tent, and distribute promotional materials — but these need to first be vetted by the YDS management, Oyelami told LifeSiteNews.

The YDS management board ratified the agreement on Thursday, and voted in favour of issuing VOTN a permit by the end of February, for the August 6 event.

It was admittedly a rather anti-climactic end to a widely publicized dispute that stirred outrage well beyond Toronto.

The YDS events manager denied VOTN a permit in October, stating that its festival performers in previous years had praised Jesus and Jehovah, and that amounted to proselytizing,

“If you’re praising Jesus, ‘praise the Lord,’ and ‘there’s no God like Jehovah,’ that type of thing, that’s proselytizing,” Natalie Belman told Oyelami at the time. “That is a big problem. … That [kind of thing], from the stage, is not acceptable.”

News of that decision and perceived discrimination against Christians galvanized the Christian community to protest.

Over 30,000 people signed a LifeSiteNews petition, and 10,000 a TheRebel.media petition asking the city to reverse the ruling, petitions which  a VOTN delegation delivered to the mayor’s office on November 9.

VOTN now has to raise money for its August 6, 2016 music festival — including the $15,000 rental fee for the square, which is located in the heart of downtown Toronto.

This will be the sixth year for the one-day Christian music fest, and the crowds in the past numbered about 5,000 to 6,000, Beena Ruparelia told LifeSiteNews, but that was perhaps because it was held at the same time as the Caribana festival.

She’s not sure if the August 6 date will draw as many people.

Peter Ruparelia says he’s also certain that YDS officials will be scrutinizing the 2016 festival to make sure performers comply with the agreement. His wife agreed, but noted: “Persecution is part of the walk.”

Oyelami said the fight with the YDS board has confirmed to him that it’s always best to “be honest about what your plan is. If they’re against it, fight it.”

“Stand up for your rights,” echoed Ruparelia.

And one thing this battle, which he admits has been “hard on me and my wife” has confirmed for him is that “you have to trust in God in everything that you do,” he said.

“He’s in control of your life.”

For information on Voices of the Nations go here, and to donate go here.