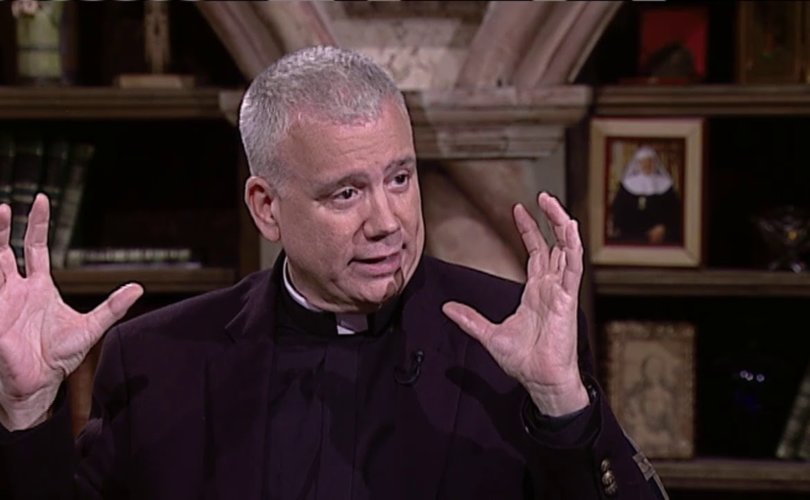 Michael Voris, the CEO of Church Militant, told LifeSiteNews last night that his organization is going to bring a lawsuit against both Fr. Richards and the Diocese of Erie, Pennsylvania.

“Fr. Larry Richards’ threatening tirade from his pulpit against his own parishioners this past Sunday officially crosses the line,” Voris told LifeSiteNews by email.

“Church Militant will begin pursuing legal action against both Fr. Richards and his diocese.”

READ: ‘I know who you are’: Fr. Larry Richards intimidates parishioners who complained about him to bishop

Voris was referring to the March 31 Sunday homily in which Richards departed from his reflections on the day’s Gospel to discuss the controversy that ensued after he accused Church Militant of having sent him a death threat. Richards had made the allegation at a Legatus conference in late January 2019.

Richards told his congregation that he knew some of them had written to the bishop about him, that the bishop had told him their names and that he knew who they were. Quoting the First Vatican Council’s Pastor Aeternus out of context, Richards stated that those who “go against” Pope Francis are in danger of eternal damnation.

After LifeSiteNews asked Church Militant to respond to Richards’ allegation that they threatened his life, both Christine Niles and Michael Voris denied it. Following LifeSiteNews’ report, Fr. Richards issued a partial retraction on his Twitter account.

“I was wrong in what I said about Church Militant – it was NO ONE in their LEADERSHIP who threatened me – it was one of their FOLLOWERS who called me on the phone and threatened me. I should have made that clear. We need to stop demonizing each other, I will stop first. Peace,” he wrote.

Unsatisfied, Church Militant sought legal advice and drew up a cease-and-desist letter. Voris reminded viewers of his “The Vortex” show that this was not the first time Richards had made allegations against the organization. Previously Richards had broadcast over an EWTN call-in show that Church Militant was “from the devil.”

Voris warned Richards that unless he fulfilled certain conditions, Church Militant would take further legal action. The broadcaster asked the priest to write to Legatus to apologize, clarify that Church Militant had not made death threats against him, and ask its leadership to inform its members of the retraction. Voris also asked Richards to tell his EWTN Open Line audience that he had lied about Church Militant and that no-one from the organization has ever threatened him.

“If you do not accede to these demands immediately, there will be further action, take it to the bank,” Voris said on his March 19 broadcast.

Two weeks later, Fr. Richards stated in his recorded Sunday homily that he was “in trouble” because he supports Pope Francis.

LifeSiteNews is another organization Richards dislikes. Last week LifeSiteNews publisher Steve Jalsevac shared a personal story of an unpleasant encounter with the acclaimed preacher. Having heard that Richards had condemned LifeSiteNews during a mission in a nearby town, Jalsevac attempted to speak with him. In response, Richards swore at Jalsevac and raised his fist at him.

Later Richards told a congregation that he had intended to hit the LifeSiteNews co-founder because he “goes against” the Holy Father.

Jalsevac acknowledged that Richards has been “very actively pro-life” and has “inspired and helped many people.”

“But that is what makes LifeSite’s and others’ negative experiences with him all the more puzzling,” Jalsevac wrote.

LifeSiteNews is awaiting responses from both Fr. Richards and the Diocese of Erie, Pennsylvania and will add them to this developing story.