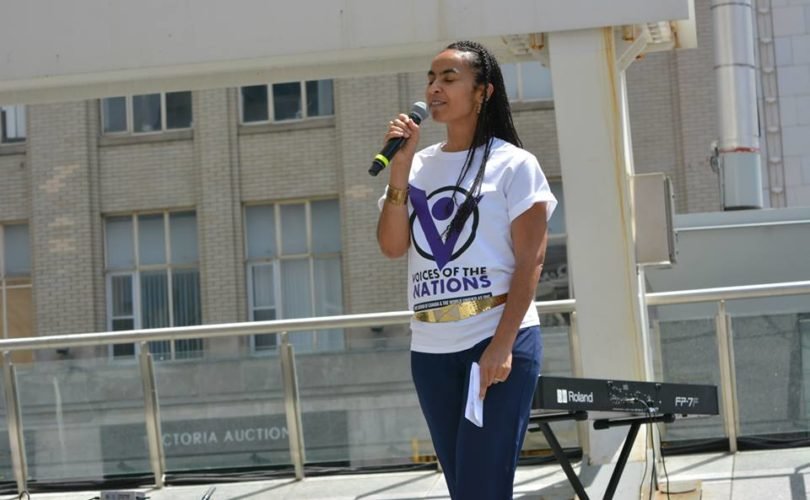 Sign the petition to the City of Toronto asking that they lift the ban on the Voice of the Nations music festival. Click here.

TORONTO, November 3, 2015 (LifeSiteNews) — The City of Toronto is being threatened with legal action for refusing to grant a Christian group a permit to use a prominent downtown square for its annual musical festival next year, all because the city determined that singing the name of Jesus in the public venue contravenes city policy against “proselytizing.”

“This Decision constitutes a direct violation of the fundamental freedoms of expression and religion which are guaranteed by the Canadian Charter of Rights and Freedoms,” stated the Justice Centre for Constitutional Freedoms in a legal warning letter to the City of Toronto submitted today.

“We request that you immediately reverse this Decision and approve [Voices of the Nations’] application.  Failure to do so will necessitate a court action against the City of Toronto and the Yonge-Dundas Square Board of Management (“YDS”) for its censorship of expression and its violation of religious freedom,” states the four page letter signed by Justice Centre lawyer Marty Moore.

Last week LifeSiteNews broke the story about the Christian group being denied a permit for its annual event in Toronto’s downtown Yonge-Dundas Square where the group celebrates Christianity through live music and dance.

Voices of the Nations (VON) has been using the square without issue for the past five years. This year’s August 1 event featured 19 different performances, including children’s choirs and popular Christian bands, where well-known ‘praise-and-worship’ songs such as “Days of Elijah” are performed.

But when VON’s Events Coordinator Leye Oyelani contacted the Square’s manager of events, Natalie Belman, by phone to apply for next year’s permit, he was told that a permit would not be issued and to look for a venue elsewhere.

“I’ve already advised Peter [Paresh, Director of VON] that we're not going to be permitting you guys this year for next year because of the proselytizing on the square, and that’s a big issue for us,” said Belman in a transcript of the October 23 conversation obtained by LifeSiteNews.

“If you’re praising Jesus, ‘praise the Lord,’ and ‘there’s no God like Jehovah,’ that type of thing, that’s proselytizing,” she said.

Oyelani then said that he didn’t think singing about God “would be a problem” given that it was a Christian event.

“That is a big problem,” Belman replied. “That [kind of thing], from the stage, is not acceptable.”

The Justice Centre sees the city’s decision as a “direct violation of the fundamental freedoms of expression and religion which are guaranteed by the Canadian Charter of Rights and Freedoms.”

Carpay called the City’s decision “illegal content-based censorship, and a blatant assault on the Charter freedoms of religion and expression.”

“The public square belongs to the public, including all people of all religious, ethnic, cultural and political persuasions,” he said in a press release.

The Justice Centre noted the City’s hypocrisy in banning the festival from the square.

“The City has had no qualms about the interactive chanting of Hare Krishna mantras at Yonge-Dundas Square (June 7, 2015); a candlelight vigil against Islamophobia (February 13, 2015); a rally in support of legalizing marijuana (August 14, 2014); and numerous Pride events,” it stated in a press release.

Christians living in Toronto told LifeSiteNews that the City’s discrimination against Christians has had the effect of galvanizing the Christian community.

“The article touched a nerve in the Christian community. It is encouraging. We are stronger when we unite,” said Ben Robinson, director of the Toronto Christian Business Directory and a sponsor of previous VON events, to LifeSiteNews.

A petition launched by LifeSiteNews to Toronto Mayor John Tory as well as to the City of Toronto asking that the decision be revoked has been signed by 21,800 as of this writing. The petition along with the names of those who signed it will printed and hand-delivered to city officials in the coming days.

Carpay hopes the City will make the right decision.

Editor’s Note: Voices of the Nations is raising a legal defence fund. A secure, online donation can be made at voicesofthenations.com, and clicking on “Make a one time Donation” on the top right.