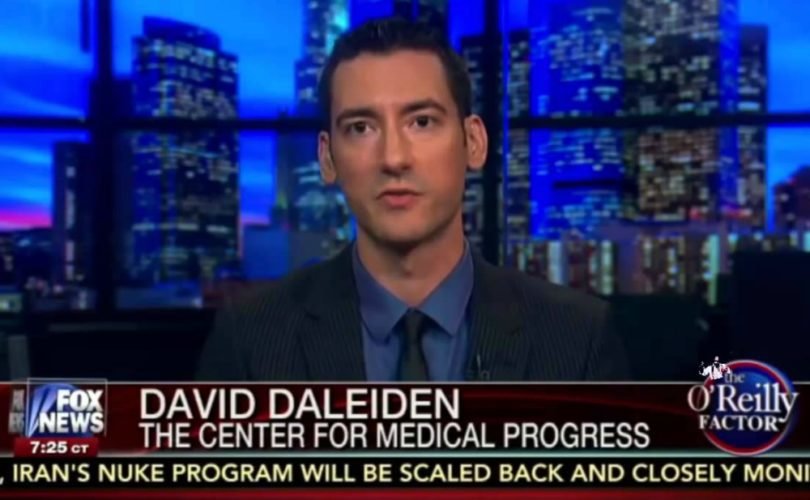 WASHINGTON, D.C., October 6, 2015 (LifeSiteNews) – Congress will be able to see every moment of the undercover footage shot by the Center for Medical Progress (CMP), a federal judge ruled today.

U.S. District Judge Wiliam H. Orrick III, the same judge who issued a temporary restraining order on behalf of the National Abortion Federation in late July, said that CMP may release all videos and transcripts to the Congressional committee that had sought them.

“I will not countenance a game of hide the ball with respect to these documents, video footage and communications, that interferes directly with these proceedings,” he concluded.

But there's a catch. CMP must also provide every copy of the same materials to NAF “[p]rior to responding to the Congressional subpoena.”

CMP's lead investigator, David Daleiden, had said that until today he was caught between conflicting legal orders — the temporary restraining order that prevented him from releasing unseen video footage, and a Congressional committee's subpoea seeking precisely that material.

NAF had argued that the subpoena – issued by Rep. Jason Chaffetz for the House Committee on Oversight and Government Reform – lacked legal force without full House authorization, and Chaffetz should instead fight NAF in court.

In his four-page order, Judge Orrick ruled that he could not stand in the way of Daleiden “voluntarily” responding to a federal investigation. “In our Constitutional system, there are three equal branches of government, and courts should refrain from creating needless friction with a coordinate branch of government.”

But Orrick, who was named to the bench by President Obama after having made a donation to Obama's presidential campaign, said the footage cannot yet be released to the public due to “the history of violence against the providers of abortion care and the specific acts of intimidation against NAF members, including death threats, harassment and reputational harm.”

NAF has sought access to the videos in the hopes of prosecuting Daleiden and other investigators for infractions they allegedly committed during the course of their 30-month-long investigation. But they hoped no one else would see a single frame.

“The National Abortion Federation has gone to extraordinary lengths to keep David Daleiden’s footage of its annual meetings out of the hands of law enforcement and the Congress,” said Peter Breen, special counsel with the Thomas More Society, a Chicago-based public interest law firm that is representing CMP.

“We will continue to urge the District Court to allow David to release more undercover videos” to the public, he said, “so that the American people can make their own assessment of the practices of Planned Parenthood and the National Abortion Federation.”

The court battle is likely to climb the legal ladder. “The National Abortion Federation is seeking to suppress David [Daleiden]'s ability to communicate,” Thomas More Society President Tom Brejcha said in a webinar co-sponsored by LifeSiteNews last month. “They want to put him in jail. They want to destroy him financially.”

If necessary, Brejcha said, CMP investigators are willing to appeal all the way to the Supreme Court to release the unseen footage.