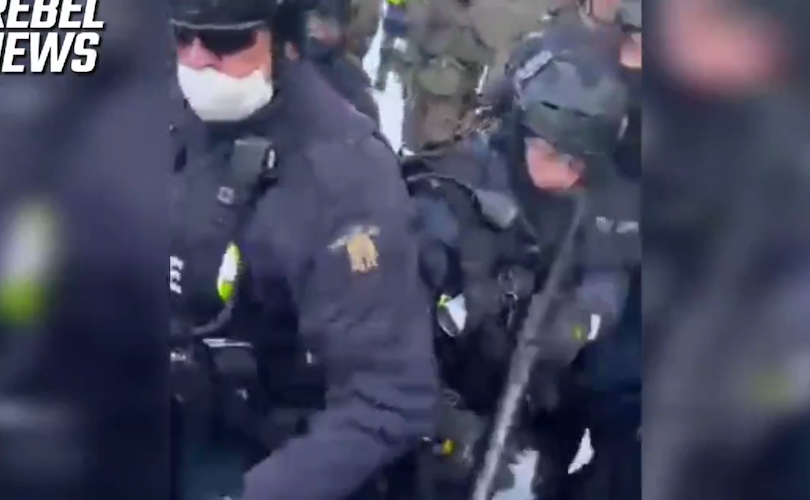 OTTAWA (LifeSiteNews) – Rebel News director Ezra Levant tweeted this morning with video evidence that a female reporter from the conservative news outlet on the ground in Ottawa was “assaulted by Trudeau’s police.” Video evidence shows Alexa Lavoie wailing in pain after she reports being beaten by police clubs and shot in the leg with a tear gas canister at point-blank range. The firing of the canister at close range was caught by photographers.

3. Here is video of the attack. I understand we have more footage. Unprovoked, targeted violence, beating a woman with a stick, and shooting her at point-blank range with a tear gas round. pic.twitter.com/yQXyDL4nJL

Levant reports, “Alexa says she was specifically targeted by a cop who saw her camera. She says he came up to her and beat her and pushed her down. She says he tried to knock the phone out of her hands, to stop her from filming.”

The officer aimed right at Alexa's leg and discharging the weapon at the 1:03:42 mark of her live feed. pic.twitter.com/BnSS9qmQhF

Rebel News is suing the Ottawa police on behalf of their reporter.

Meanwhile, Ottawa police on their Twitter feed have been providing a misleading narrative regarding their actions. For instance, they have suggested that a bicycle was thrown at one of the horses in order to injure the horse and that those trampled were not injured and walked away.

We hear your concern for people on the ground after the horses dispersed a crowd. Anyone who fell got up and walked away. We're unaware of any injuries. A bicycle was thrown at the horse further down the line and caused the horse to trip. The horse was uninjured. pic.twitter.com/tgfsl6uxT7

In fact, it was the walker of a woman trampled by the horses that can clearly be seen in footage. Moreover, footage of the trampling and follow-up of the ambulance pick-up of the victims says otherwise.