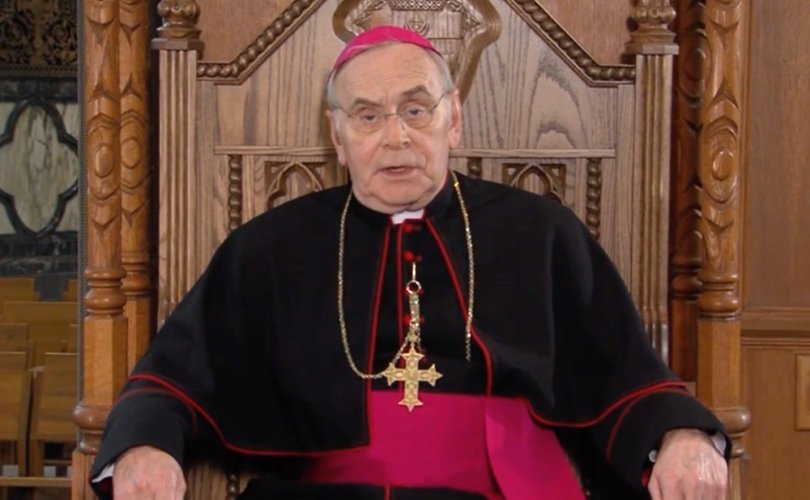 COVINGTON, Kentucky, January 25, 2019 (LifeSiteNews) – Amid mounting pressure, Bishop Roger Joseph Foys of the Diocese of Covington issued a new statement Friday apologizing to a group of pro-life students the Diocese initially condemned over a confusing video from the March for Life.

The Diocese was among those that condemned a group of Covington Catholic High School students after reports claimed a video showed them harassing an elderly Native American veteran at the March for Life last weekend. But additional extended video and firsthand accounts soon revealed the man, Nathan Phillips, was the one who waded into the group waiting for its bus and decided to beat a drum inches from student Nick Sandmann’s face, and other adults who accompanied Phillips shouted racial taunts at the kids. The kids had been performing school cheers in an attempt to drown out the harassment, and did not respond to adults’ insults and abuse in kind.

On January 19, the Covington Diocese and the high school issued a joint statement that the students’ behavior was “opposed to the Church’s teachings on the dignity and respect of the human person.” The statement also suggested the students faced expulsion. After the original narrative fell apart, Foys issued a new statement stating that an “independent, third-party investigation is planned to begin this week” and that it was “important for us to gather the facts that will allow us to determine what corrective actions, if any, are appropriate.”

Many have criticized the community’s Catholic authorities for condemning the boys in the first place and for not simply retracting and apologizing for the original statement. An attorney has threatened libel suits for any public figures that refuse to retract false statements, and a conservative group has targeted Foys in radio ads.

LifeSite collected more than 27,000 petition signatures calling on him to apologize and exonerate the students. On Thursday morning, LifeSite Campaigns Manager Scott Schittl gathered with a group of local Catholics outside the diocesan offices to pray a Rosary. Schittl attempted delivery of the petition, but the doors were locked.

“We are sorry that this situation has caused such disruption in the lives of so many. We apologize to anyone who has been offended in any way by either of our statements which were made with good will based on the information we had,” Foys writes in the letter. “We should not have allowed ourselves to be bullied and pressured into making a statement prematurely, and we take full responsibility for it.”

“I especially apologize to Nicholas Sandmann and his family as well as to all CovCath families who have felt abandoned during this ordeal,” he continues. “Nicholas unfortunately has become the face of these allegations based on video clips. This is not fair. It is not just.”

Foys expresses hope that the results of the investigation “will exonerate our students so that they can move forward with their lives.” Covington parents have expressed concern that the investigation, which has not been called off, is seeking permission to interview their children and that they were barred from entering the school without an appointment while Foys met with the students this week.

Message From the Most Rever… by on Scribd

The president of the March for Life initially released a statement saying the boys behaved in a “reprehensible” manner. It released two tweets on January 20 saying, “Given recent developments regarding the incident on Friday evening, March for Life has deleted its original tweet and removed our statement on this matter from our website. It is clear from new footage and additional accounts that there is more to this story than the original video captured. We will refrain from commenting further until the truth is understood.”

Nearly a week later, the March for Life has not commented further.

President Trump has come out in support of the boys, saying the media “smeared” them and made them “symbols of Fake News and how evil it can be.” A number of other pro-life politicians, such as Kentucky Gov. Matt Bevin, Kentucky Sen. Rand Paul and Rep. Thomas Massie, and Sen. Ted Cruz have come to the students’ defense.

More information has also come to light about Nathan Phillips, including that he did not actually serve in Vietnam as he and multiple media outlets reported he did, has a violent criminal record, and attempted to lead protestors in disrupting Mass at the Basilica of National Shrine of the Immaculate Conception – where many pro-life events take place around the March for Life – just one day after he confronted Sandmann.