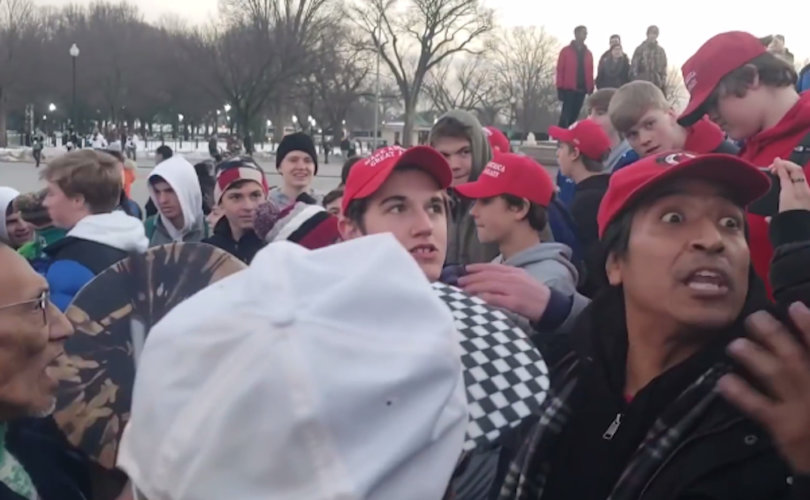 KENTUCKY, January 21, 2019 (LifeSiteNews) – The principal of Covington Catholic High School, Robert Rowe, sent an email to parents tonight informing them that an “independent third-party investigator” is looking into the incident that made their children the subject of death threats and blatantly inaccurate national media coverage. Rowe did not apologize for the joint statement of the Covington Catholic administrators and the Diocese of Covington condemning the now-vindicated students and suggesting they may be expelled.

“The incident that took place at the March for Life in Washington, D.C. is being fully investigated by an independent third-party investigator. Based upon and following an investigation, we will be taking the appropriate action regarding this matter,” wrote Rowe. “Please know that the administration is currently working with the diocese, local police departments, and local authorities to ensure the safety of our students, faculty and staff.”

“Please note that we have been advised should you receive any type of threatening communication, you are asked to contact the local authorities,” he continued. “Thank you for your patience during this most difficult time. Please continue to pray for our community.”

The media, the Diocese of Covington and other Catholic leaders, left-wing and conservative activists, and even the March for Life itself condemned the students for allegedly harassing a Native American man, a narrative forwarded by a short video of an encounter between Covington students and left-wing activists.

A Polish lawmaker has invited the “wrongfully accused” students to address Parliament. Pro-life Republicans Sen. Rand Paul and Rep. Thomas Massie, both from Kentucky, have expressed support for the students.

“The honorable and tolerant students of Covington Catholic School came to DC to advocate for the unborn and to learn about our nation’s (capital),” tweeted Rep. Massie, who represents the congressional district in which Covington Catholic is located. “What they got was a brutal lesson in the unjust court of public opinion and social media mobs.”

A number of media figures who initially condemned the students, many of whom were wearing “Make America Great Again” hats in the viral videos, have retracted their initial reporting on the incident and/or apologized.

Even pro-gay Jesuit Father James Martin walked back his comments, saying he regretted wading into the controversy. He did, however, use the classic victim-blaming approach of questioning the students’ clothing: “ … why were so many Covington students wearing MAGA hats? It’s a free country, for sure, but they were at the March for Life, a religious event, under the care of their Catholic high school administrators, not a political rally.”

The Diocese of Covington has not retracted its initial remarks. It does not appear that Archbishop Joseph Kurtz of Louisville, the former president of the U.S. Conference of Catholic Bishops, has retracted his condemnation of the students’ “shameful” actions, either.

The March for Life initially released a statement criticizing the students’ “reprehensible behavior” but deleted that statement from its website and Twitter after move evidence surfaced and it became apparent that the liberal media narrative was far from accurate. It released two tweets saying in part, “We will refrain from commenting further until the truth is understood,” and declined to comment further earlier today.