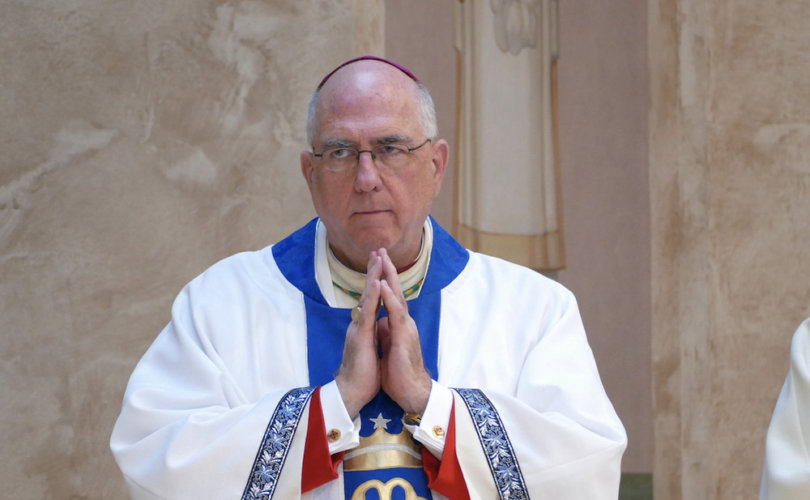 The contest between Cupich and Naumann presented the U.S. bishops with an opportunity to define their vision for pro-life activism.

The vote was also a “barometer of support for Pope Francis among the American hierarchy,” the Wall Street Journal astutely noted. Cupich and Naumann “represent the ideological poles of the U.S. church and have articulated different visions of what being pro-life should mean.”

Cupich is widely known as one of the most left-wing prelates in the U.S. Catholic Church. Pope Francis appointed him to the prominent position of Archbishop of Chicago. Pope Francis made Cupich a cardinal in 2016. The pontiff also has given Cupich a key role in picking new U.S. bishops.

In May 2017, at Naumann’s direction, the Archdiocese of Kansas City began to cut ties with the Girl Scouts over their promotion of abortion and transgenderism.

“Our greatest responsibility as a Church is to the children and young people in our care,” said Naumann. “It is essential that all youth programs at our parishes affirm virtues and values consistent with our Catholic faith.”

“Girl Scouts USA … are no longer a compatible partner in helping us form young women with the virtues and values of the Gospel,” he said. He told parishes to instead start troops of American Heritage Girls, an alternative to the Girl Scouts that doesn’t promote abortion.

In his critique of Kaine, Naumann touched on many of the problems with being “personally” against abortion but publicly voting for and favoring pro-abortion policies.

“Why is Senator Kaine personally opposed to abortion if he does not believe that it is the taking of an innocent human life?” Naumann asked.

Cupich has risen to power during the current pontificate. Before then, he was known as the bishop who asked priests and seminarians not to pray outside abortion centers and who locked Catholics out of their parish during the Easter Triduum to prevent them from holding Traditional Latin Masses. The parish was forced to conduct its Good Friday liturgy on the sidewalk.

Cupich has resurrected many of the “seamless garment” arguments of former Chicago Archbishop Joseph Bernardin equating intrinsic evils like abortion with social ills like poverty. Left-wing Bernardin was the archbishop of Chicago from 1982 to 1996.

After equating abortion with non-moral issues, Bernardin and Cupich seemingly then ignore abortion and direct attacks on human life to push for liberal political causes.

In August 2015, in the wake of the Center for Medical Progress videos exposing Planned Parenthood’s baby body parts trafficking scandal, Cupich wrote that unemployment and hunger are just as appalling as the killing of millions of children in the womb and the damages that many of their mothers have experienced.

When the governor of Illinois promised to veto a law mandating taxpayer-funded abortion (he later broke this promise), Cupich thanked him “for this principled stand.”

“Abortion is a controversial issue in this country, but using public money to provide abortions should not be,” he said.

“I pray that this divisive issue will be put behind us and our government officials will now concentrate on the many difficult challenges facing Illinois,” Cupich continued. “Most importantly, our political leaders must find a way to cooperate and craft a budget that serves all our people.”

Cupich’s statement implied that abortion is wrong because it’s a “divisive” issue and that taxpayer-funded abortions are wrong because most Americans oppose them.

Cupich’s statements in support of gun control and immigration have much more strongly-worded.

On Monday, Cupich lamented “the poisoning rhetoric that many times is degrading of immigrants and even demonizing of them.”

There’s something wrong in our churches when people leave Mass with that “rhetoric” still “echoing” in them, Cupich said. This shows the necessity of “a call to conversion of our people.”

Cupich has called Jesuit Father James Martin a “foremost evangelizer” of youth. Martin is one of the most vocal pro-gay priests in the Church. He says same-sex couples should be able to kiss during Mass, that opposing same-sex “marriage” is akin to racism, and that same-sex attracted priests should “come out.”

“Priests for Life congratulates Archbishop Joseph Naumann on his election to be the next Chairman of the Bishops’ Committee on Pro-life Activities,” Father Frank Pavone, National Director of Priests for Life, told LifeSiteNews.

“We have known and interacted with him for nearly 25 years, since he was Director of the Archdiocesan Pro-life Committee in Saint Louis, and he has always been an encouragement to our efforts,” said Pavone. “We look forward to working with him and the other bishops who serve the committee, as well as  the staff of the Secretariat for Pro-life Activities, headed by Tom Grenchik.”

Naumann has spoken out against pornography and created resources for those hurt by addiction and exposure to it.

“We fail our people if we’re not courageous in preaching about chastity, as well as offering opportunities to help those seeking to live chastely,” Naumann said in 2011. “When we live chaste lives, we are witnesses of our faith in the world. Chastity also frees us from those things that can enslave us and leave us feeling isolated and sad.”

“Pro-life people around the country need to understand that the bishops’ pro-life committee is not meant to do the work that all the rest of us are entrusted with doing,” said Pavone. “It is a resource for the Bishops’ Conference. It is not an ‘approval board’ from which pro-life groups or activities have to get a stamp of approval in order to do their work. Rather, as Priests for Life has been told over the years, the bishops want to encourage all who are doing their part to advance the culture of life. And we look forward to doing the same!”