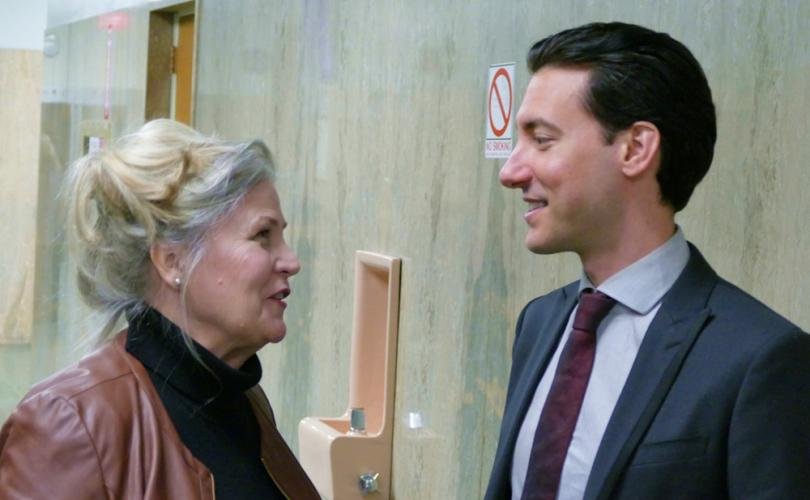 SAN FRANCISCO, California, April 22, 2019 (LifeSiteNews) — Pro-life activist David Daleiden won an unexpected victory last week. Late in the evening on Good Friday, California Superior Court Judge Christopher Hite vacated the preliminary hearings against Daleiden and his co-defendant Sandra Merritt that were scheduled to begin today in San Francisco. The surprising move, hailed by Daleiden’s legal team at the Thomas More Society as a “welcome development,” has the effect of indefinitely delaying the hearings against the 30-year-old investigative reporter.

The two-week long hearings would have determined if Daleiden and Merritt would face a jury trial for the 15 felonies they are being charged with by the California Attorney General’s office for releasing in 2015 videos of Planned Parenthood employees discussing the illegal sale of aborted baby parts. The hearings were expected to feature sworn testimony from abortionists as well as expert witnesses in defense of Daleiden’s decision to record attendees at the 2014 and 2015 National Abortion Federation annual conferences. Daleiden’s undercover videos, currently under a federal injunction ban, were also expected to be shown in the courtroom.

Judge Hite’s decision to vacate the hearings came just after California Supreme Court Chief Justice Tani G. Cantil-Sakauye issued a “stay” of “all further proceedings” in the criminal prosecution of Daleiden and Merritt Friday evening. The stay was issued so to “permit consideration” by the California Supreme Court of a petition for review filed by Merritt's lawyers earlier in the day Friday. Daleiden’s defense team previously requested a stay but it was rejected by Hite and by the California Court of Appeal, First Appellate District, Division One. Merritt’s petition prompted the grant of the stay order by the Chief Justice, thus halting today’s hearing for both Daleiden and Merritt. Read the press release issued by the Thomas More Society:

(April 22, 2019 – San Francisco)  The preliminary hearing that was set to begin on April 22, 2019, to test  whether there was sufficient evidence to warrant a criminal jury trial of undercover journalist David Daleiden, was vacated late Friday by California Superior Court Judge Christopher Hite, thereby delaying the hearing indefinitely. This surprising step was taken shortly after an order had been handed down by California Supreme Court Chief Justice Tani G. Cantil-Sakauye, “staying” (i.e., suspending) “all further proceedings” in the criminal prosecution of Daleiden and his helper, Sandra Merritt, in order to “permit consideration” by the California Supreme Court of a petition for review filed that very day by counsel for Ms. Merritt. Thomas More Society, representing David Daleiden, together with former L.A. District Attorney Steve Cooley and his former Assistant, Brent Ferreira, will also be filing a second petition for review this week. Daleiden and Merritt, undercover citizen journalists, have both been charged with 15 criminal felony counts for non-consensual eavesdropping and conspiracy as a result of their videotapes  that revealed alleged involvement of abortion industry workers in illegal baby body parts trafficking.

The not-for-profit Thomas More Society also has been defending Daleiden across the country as Planned Parenthood Federation of America, together with multiple affiliates, as well as the National Abortion Federation (NAF) have brought civil lawsuits against him.  Also, abortion-friendly officials have pressed criminal charges against him elsewhere, as in Houston, TX, where similar criminal charges were brought but later dismissed.  The current case now under consideration by the California Supreme Court, People of the State of California v. David Robert Daleiden and Sandra Susan Merritt, is being prosecuted by the CA Attorney General Xavier Becerra, successor to current Democratic Presidential candidate Kamala Harris, both of whom have been closely allied with, and supported by, Planned Parenthood.

Thomas More Society President and Chief Counsel Tom Brejcha, who is part of Daleiden’s defense team, commented on this stay of the criminal proceedings, “We are grateful for this welcome development and hopeful that the California Supreme Court will choose to hear and decide the extremely critical issue raised in this appeal, namely, whether a prosecutor may exercise his or her powers to enforce the criminal laws on a selective, politically discriminatory basis.”  Becerra and Ms. Harris have proclaimed, repeatedly and outspokenly, that they “stand with Planned Parenthood,” and both received notable campaign help from the abortion industry. Becerra’s election victory party was even sponsored and hosted by Planned Parenthood.  Nor has any similar case ever been brought in California against other undercover news gatherers who have addressed public policy issues.  Such videos are routinely published in print and on broadcast media, such as on KCBS in Los Angeles and other TV stations.  Nor could the Attorney General cite any “politically neutral” basis for prosecuting these defendants for non-consensual taping while ignoring the same conduct on the part of other journalists.  Brejcha cited California law mandating that prosecutorial powers be wielded fairly and even-handedly, applying penal laws equally as to all citizens, without political bias or favoritism, whereas here the earmarks of discrimination and bias are all too glaringly apparent.  Defendants thus argue that, “At the very least, the Attorney General should step aside and allow an unbiased prosecutor to decide whether this prosecution should go forward.  But based on evidence of bias already adduced, the case should be dismissed.”

The vacated hearing was to have tested whether Becerra could present enough evidence to require Daleiden and Merritt to defend themselves against the charges at a full dress jury trial. If he did not have sufficient evidence to meet the “probable cause” standard, then all or part of the 15-count felony prosecution would be thrown out. This hearing would have marked the first time that the anonymous abortion industry witnesses – who complained that they had been illegally videotaped – would testify in open court.  Additionally, it would have been the first time that excerpts of the videos – parts of which allegedly captured these witnesses’ and others’ willingness to engage in illegal fetal tissue sales as well as the commission of violent felony crimes against human beings – would have been shown in open court.

A previous request for a stay by Daleiden was rejected by Hite and also by the California Court of Appeal, First Appellate District, Division One.  But Ms. Merritt’s petition filed on Friday triggered the grant of the stay order by the Chief Justice, at the eleventh hour, which stopped today’s hearing for both defendants.

Brejcha also observed that, “There are other issues at stake in this case that are fundamental and rise to constitutional dimension. The court had entered an unprecedented order allowing private counsel for the complaining witnesses to participate in this criminal trial, whereas criminal prosecution is reserved for public officials, namely, state prosecutors whose duty is to represent all of “the people,” not private parties or their partisan interests. The abortion industry complainants have also been allowed to proceed anonymously, and once the defendants’ video evidence was to be shown in open court, it was to be sealed anew from any public view.  Any and all photography, broadcasting or publication of the proceedings was barred, thus curtailing defendants’ right to public trial and to confront and cross-examine their accusers.”

“Worse,” added Brejcha, “exculpatory evidence favorable to the defense has been withheld and barred from use in the criminal case by virtue of rulings suppressing use of that evidence by federal Judge William Orrick in a parallel civil case brought by Planned Parenthood and the National Abortion Federaton (NAF) in San Francisco’s federal court.  These restrictions have put us, as defense counsel, into a straitjacket, as we are forced to defend against these serious felony charges while denied access to key evidence that could and should acquit our clients. These rulings flout the federal Anti-Injunction Act as well as considerations of comity and federalism that direct federal courts to keep “hands off” state court criminal proceedings.  Likewise, California’s Attorney General has flouted his own duty under federal and California’s own constitutional principles to secure and provide this critical exculpatory evidence to the defense.  On these grounds alone, these meritless criminal felony charges must be dismissed.”

About the Thomas More Society

The Thomas More Society is a national not-for-profit law firm dedicated to restoring respect in law for life, family, and religious liberty. Headquartered in Chicago and Omaha, the Thomas More Society fosters support for these causes by providing high quality pro bono legal services from local trial courts all the way up to the United States Supreme Court. For more information, visit thomasmoresociety.org.