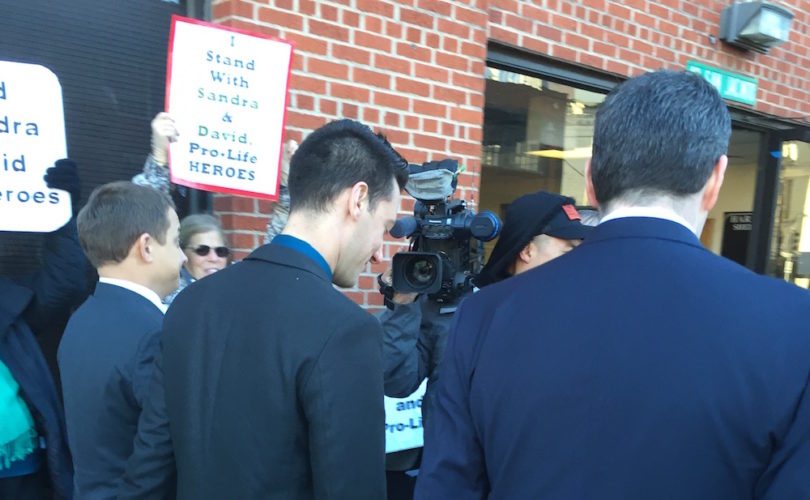 HOUSTON, February 4, 2016 (LifeSiteNews) – David Daleiden, the 27-year-old investigator whose videos exposed Planned Parenthood's willingness to receive money in exchange for aborted fetal organs and tissue, has turned himself in to law enforcement officials in Houston.

Daleiden presented himself for fingerprinting at 8:38 a.m. local time.

A handful of pro-life advocates stood outside on the sidewalk, holding signs proclaiming Daleiden courageous and a hero. A few applauded him as he entered the facility for processing.

“God bless you! God bless you!” one of them said as he entered the Action Bail Bond. He is expected to pay bail and be released today.

His partner, fellow Center for Medical Progress investigator Sandra Merritt, turned herself in to authorities yesterday and posted $2,000 in bail.

In Texas, they filmed Melissa Farrell, the director of research for Planned Parenthood Gulf Coast, discussing how to word invoices so that the remuneration was properly hidden within the “line items.”

They produced her signature on receipts that they say prove that Planned Parenthood profits from human organ trafficking and released a new video compilation showing Farrell admit that such revenues create “margin” to help pad “the bottom line.”

Exchanging human organs for “valuable consideration” is a felony under both federal and Texas state law.

However, last Monday the Harris County grand jury ignored PPGC and indicted Daleiden and his associate, Sandra Merritt on a second-degree felony charge of “tampering with a governmental record,” and a misdemeanor charge for violating the state's “prohibition of the purchase and sale of human organs.”

Texas law only allows such a serious felony charge – which carries between two and 20 years in prison and up to a $10,000 fine – if the jury believes the “intent in committing the offense was to defraud or harm another.”

Four Republican presidential candidates said they were “shocked,” “disturbed,” or “saddened” by the fact that charges had been brought against the CMP investigators.

Congressman Trent Franks likened the indictment to “an episode of 'The X-Files.'”

Cheryl Sullenger, senior vice president of Operation Rescue, raised concerns that this prosecution will deter other whistleblowers from testifying.

After initial pleas that the grand jury charges be thrown out, Harris County District Attorney Devon Anderson said in a video message that the two “will have their day in court.”

Daleiden and Merritt who both live in California, agreed to turn themselves in and fight the accusations in court, if necessary.

A LifeSiteNews petition demanding that all charges be dropped has garnered more than 100,000 signatures. The first batch of signatures will be presented to Anderson's office later this morning.