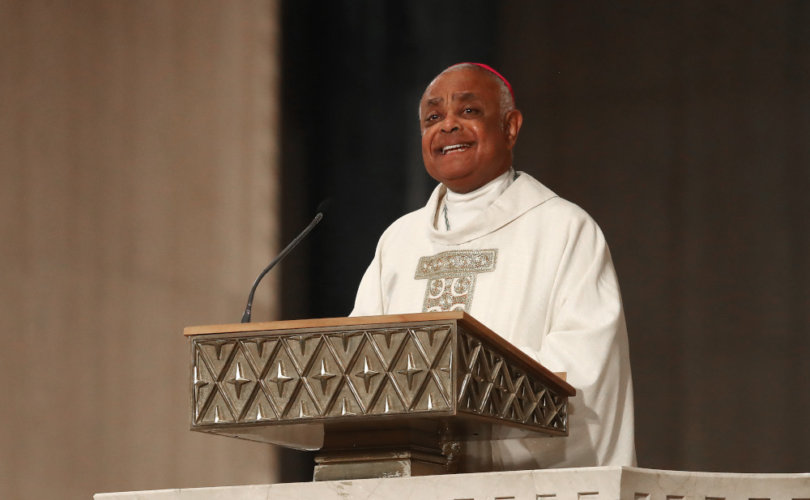 Speaking to Catholic News Service – which is funded by the United States Conference of Catholic Bishops – Gregory, who is currently in Rome to be made a cardinal on Saturday, expressed his support for Biden’s wish to receive Holy Communion, despite being an ardent supporter of abortion. Jesuit-run America magazine reprinted the interview.

Referring to his relationship with Biden, the archbishop said, “I hope it’s a real dialogue, because I think that’s the mantra of Pope Francis — that we should be a church in dialogue, even with those with whom we have some serious disagreements.”

The archbishop noted how Biden had received Communion during his eight years as vice president under President Barack Obama, and that “I’m not going to veer from that.”

Gregory added that Catholics knew the Church’s teaching regarding the “sacredness of human life from conception to natural death.” Accordingly, he does not think that he would be giving scandal in giving Holy Communion to Biden, who denies Catholic teaching on that point.

Continuing, Archbishop Gregory called for “the capacity to have civil disagreements — serious disagreements, you know, really pointed disagreements — but done in such a way that the focus is on the argument, not on the demonization of the people with whom we disagree.”

Joe Biden has been very open about his support for abortion as well as gender ideology. He recently called abortion an “essential health service” and wishes to enshrine abortion into federal law.

Biden also advocates a number of policies which would promote LGBT ideology in everyday life in America, as well as across the world.

After Biden was denied receiving Holy Communion by a priest last year, in accordance with canon law, he stated, “It’s not a position that I’ve found anywhere else, including from the Holy Father, who gives me Communion.”

Cardinal Raymond Burke, former Prefect of the Apostolic Signatura, gave an interview in September in which he referenced Biden, saying that “a Catholic may not support abortion in any shape or form because it is one of the most grievous sins against human life, and has always been considered to be intrinsically evil.”

Cardinal Burke gave another interview just days prior to the presidential election, in which he condemned Biden’s positions on life, marriage and the family.

“I can’t imagine that he would present himself as a devout Catholic,” Burke said. “He has a record which is unfortunately perfect in promoting the attack on the innocent defense of the unborn … He is also not correct on the issues with regard to marriage and the family. The great darkness in our nation comes from the wholesale slaughter of the unborn, the attack on the family, all this gender theory … and now the attack on religious freedom.”

Archbishop Gregory has been at odds with Catholic teaching on several occasions.

Earlier this year, he claimed that a person’s “human dignity” begins at birth, instead of at conception. “Birth is only the first moment of a person’s human dignity, which is never lost throughout the journey of life,” Gregory stated in an email, according to the Associated Press.

In 2019, Gregory told a woman pretending to be a man and claiming to be a practicing Catholic that as a transgender person she belongs to the “heart” of the Church and fits right in “the family.”

During the COVID-19 lockdowns, Archbishop Gregory made headlines for issuing a stinging rebuke to the John Paul II National Shrine for “allow[ing]” President Trump and First Lady Melania Trump to go through with a long-planned visit the day after Trump infuriated liberals by standing outside of St. John’s Episcopal Church with a Bible. The church had been set on fire the night before. Many in the media falsely claimed that the protestors outside St. John’s had been teargassed rather than pepper sprayed to clear the way for the president.

In 2019, however, Gregory offered a funeral Mass for the repose of the soul of pro-abortion journalist Cokie Roberts. Pro-abortion, pro-homosexual Speaker of the House Nancy Pelosi (D-CA) gave a eulogy from the lectern in the Cathedral of St. Matthew the Apostle in the nation’s capital as the archbishop looked on.

In spite of these actions and positions, Pope Francis decided to make Gregory a cardinal.