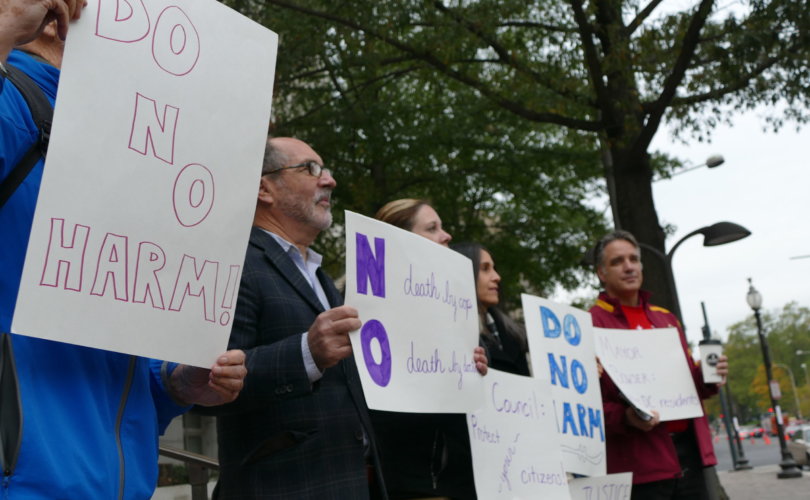 WASHINGTON, D.C., November 1, 2016 (LifeSiteNews) – The city council of the nation's capital voted 11-2 this afternoon in favor of a bill legalizing physician-assisted suicide.

Bill 21-38, the Death With Dignity Act, must pass the council once more and be signed by the mayor to go into effect. Congress would have the power to overturn it.

Dozens of pro-life and disability rights advocates in red as well as assisted suicide supporters in yellow filled the room to capacity and waited several hours before the vote took place.

“They shoot horses, don't they?” one assisted suicide supporter quipped to LifeSiteNews.

“The sense of God and the sense of man that comes when you have a proper sense of God has been lost to a great extent in our society,” Little Sisters of the Poor Communications Director Sister Constance Veit told LifeSiteNews. She said the passage of the legislation demonstrates “the very sad misunderstanding of the value of suffering and the good that can come from that. They really portrayed terminal illness as a time of excruciating suffering and it doesn't have to be that.”

Councilmember Mary Cheh introduced Bill 21-38 in January 2015. Since then many pro-life and disability rights advocates have lobbied the city council to reject it, arguing that it unfairly targets low-income residents and the disabled and incentivizes insurance companies to provide cheap deadly drugs instead of life-saving treatment.

“I chose to put aside the argument of religion or morality,” Councilmember Yvette Alexander, who voted against the bill, said. “Absent that, there are a number of additional concerns posed by this legislation” such as the possiblity of the poor, elderly, and disabled being coerced, lack of oversight in administration of the drug, and the difficulty of predicting when someone has only six months to live, she said. “I cannot support this bill.”

“Given the nature of this bill being a literal life or death issue,” Alexander said she thinks that D.C. residents should vote on it as a referendum.

Several councilmembers said they support assisted suicide because they have watched relatives suffer.

“We are doing the right thing for our residents,” said Councilmember Elissa Silverman, who discussed how her grandmother had been hooked up to a ventilator.

Suicide drugs prescribed by a doctor is “one choice among many,” said Cheh. She said fears about coercion and threats to the vulnerable are “baseless” and that part of the Hippocratic Oath to “First, do no harm” means respecting the “choice to die.”

Councilmember Brianne Nadeau joined Alexander in voting against the bill. Both are Democrats.