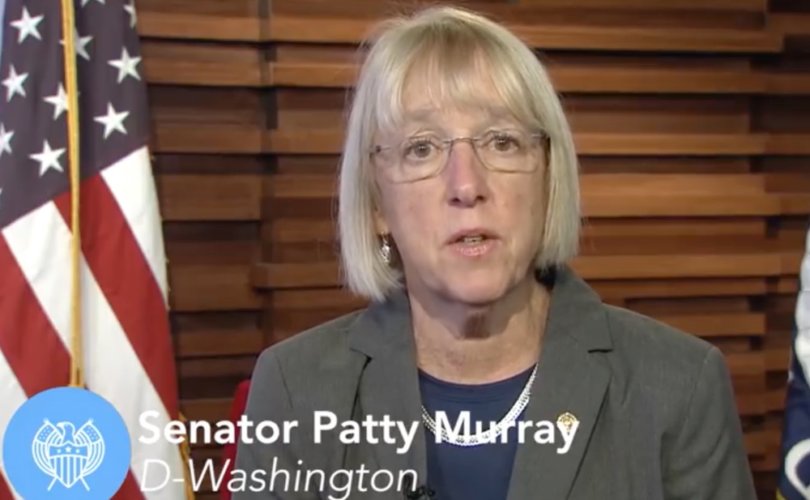 This was a unanimous consent vote, a mechanism under which the bill passes the U.S. Senate if no senator objects and individual senators’ positions are not recorded.

Murray objected to the motion, claiming there are already laws against infanticide.

“This is a gross misinterpretation of the actual language of the bill that is being asked to be considered and, therefore, I object,” said Murray.

After Murray objected to the bill, Sen. Joni Ernst, R-IA, lamented on the Senate floor that this body “can no longer unanimously condemn murder.”

“There is nothing great, there is nothing moral, or even humane about the discussion that we have before us today,” said Ernst. “Over the past week, we have witnessed the absolutely ugly truth about the far-reaching grasp of the abortion industry and its increasingly radicalized political agenda. Politicians have not only defended aborting a child while a woman is in labor, but have gone so far as to support the termination of a child after his or her birth. A child. A baby. Rationality, decency, and basic human compassion have fallen by the wayside.”

Majority Leader Sen. Mitch McConnell, R-KY, called the Act “legislation that ought to be the very definition of something that receives unanimous consent in this body.”

“It’s harrowing that this legislation is even necessary,” said McConnell. “It was even more disturbing when last week, a Democrat Governor was unable to simply state that of course – of course – these newborn babies have human rights that must be respected.”

It’s now up to McConnell to decide whether to force a roll call vote on the anti-infanticide bill at a later date.

Sen. Ben Sasse, R-NE, brought the measure to the floor after “morally repugnant” comments Virginia Gov. Ralph Northam, a Democrat and pediatric neurologist, made last week about infanticide. Sasse suggested after Murray’s objection that he will fight to force a roll call vote on the bill.

Video went viral last week from a subcommittee hearing in which Democrat Del. Kathy Tran takes questions about her bill to repeal regulations on late-term abortions. Republican Del. Todd Gilbert asked how late in the third trimester a physician could perform an abortion and whether that includes when the mother “has physical signs that she is about to give birth.”

“I don't think we have a limit in the bill […] my bill would allow that, yes,” Tran answered.

He later claimed he was only referring to cases such as a “nonviable pregnancy” or “severe fetal abnormalities.”

“The word ‘evil’ comes to mind,” he said of Northam’s comments. “These comments the governor made pull back the curtain on an extreme and dangerous abortion agenda that shows callous disregard for human life. What the Virginia governor is defending and what these ghoulish abortion-up-to birth laws enable is the free reign of brutal killers like Kermit Gosnell. Babies who survive the violence of an attempted abortion must not be subject to further violence and neglect.”

Northam’s comments “turned the stomachs” of people around the world, Sasse said tonight. He called the Virginia governor a “disgraced coward.”

“Just a few years ago, the abortion lobby was really clear in its talk about hoping abortion would be…safe, legal, and rare,” he continued. “Now we’re talking about keeping the baby comfortable while the doctors have a debate about infanticide.”

“You’re either for babies, or you’re defending infanticide…please, don’t let Governor Northam define you,” Sasse pleaded with his Democrat colleagues.

The bill was co-sponsored by more than three dozen Republican senators.

“Triumphantly, defiantly, and against all odds, Gianna Jessen entered this world after her own abortion,” he said.

“Providing life saving care to an infant who survives an abortion is an issue that everyone should be able to agree on but that's not the case in the United States Senate,” said Tony Perkins, President of the Family Research Council. “Senator Murray went to the floor this evening and blocked a vote on legislation that ensures babies born alive after a failed abortion are treated with the equal care given to babies born at the same gestational age.”

He continued, “Infanticide is unacceptable in a civilized society, regardless of what one may think about abortion itself. Whether it's by negligence or with intentionality, the killing of a baby who has been born alive – even if he or she survives an abortion – is abhorrent. This atrocity must stop. America must be better than this.”

On Thursday, Sasse said on the Senate floor, “I’m going to ask all 100 senators to come to the floor and be against infanticide. This shouldn’t be complicated.”

“Everyone in the Senate ought to be able to say unequivocally that killing that little baby is wrong. This doesn't take any political courage. And, if you can't say that, if there's a member of this body that can't say that, there may be lots of work you can do in the world but you shouldn't be here,” Sasse argued. “There should be no politics here that are right vs. left, or Republican vs. Democrat. This is the most basic thing you could be talking about.”

It is not likely that the House version of the bill would pass in the Democrat-controlled House, if even allowed to be voted on. This is despite the fact that the Born-Alive Infants Protection Act, which defines infant survivors of abortion as “human beings” entitled to all the rights in the U.S. Constitution, was passed by both Democrats and Republicans in 2002 and signed into law by then-President George W. Bush. The Born-Alive Abortion Survivors Protection Act would build on that law.

In 2015, only five House Democrats supported the Born-Alive Abortion Survivors Protection Act, which then-President Barack Obama said would have a “chilling effect” on “access to care.”