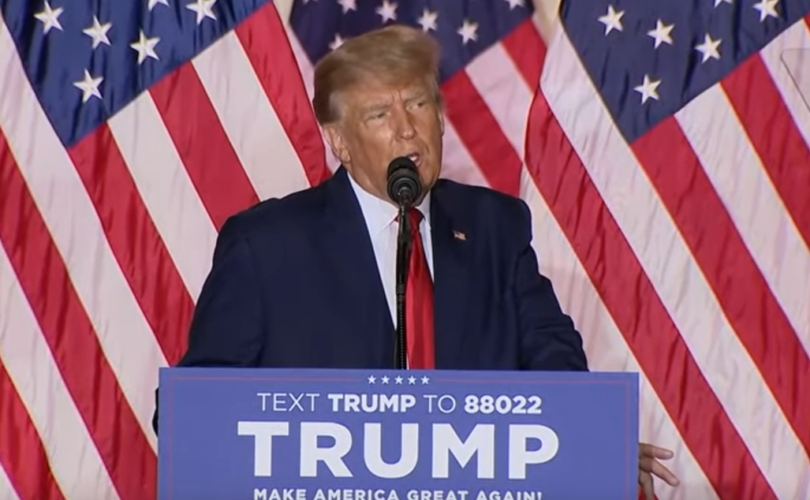 PALM BEACH, Florida (LifeSiteNews) — Former President Donald Trump announced today, amid soaring inflation, widespread misery, and a feeble outcome for the GOP in the 2022 midterms, that he is running for president in 2024.

“In order to make America great and glorious again, I am tonight announcing my candidacy for president of the United States,” Trump announced at his Mar-a-Lago resort in Palm Beach, Florida Tuesday.

The highly anticipated announcement caused the crowd to erupt in cheers and applause, to which Trump remarked, “It’s a beautiful thing.”

“Together we will be taking on the most corrupt forces and entrenched interest imaginable,” continued the former president. “Our country is in a horrible state, we are in grave trouble. This is not a task for a politician or a conventional candidate, this is a task for a great movement that embodies the courage, confidence and the spirit of the American people.”

In another notable moment, Trump told the American people, from grandmothers to firefighters, that they cannot “stay quiet any longer,” as the “country is being destroyed before your very eyes.”

“This will not be my campaign, this will be our campaign, all together,” he added to more cheers.

Trump teased his November 15 announcement on November 7, the eve of the 2022 midterm elections, at a rally for JD Vance. Vance barely beat Rep. Tim Ryan for Ohio’s open Senate seat.

“We want nothing to detract from the importance of tomorrow,” Trump said at the time.

Despite Trump’s decision to delay the announcement for the sake of the midterms, the widely-expected “red wave” or “red tsunami” never materialized on election night, with multiple races “too close to call” the morning after; the pro-abortion side winning every statewide ballot initiative related to abortion; pro-lockdown, and Democrat governors who embraced authoritarian and draconian COVID measures re-elected.

Trump’s accomplishments for the pro-life cause are numerous, but the former president is also not without significant political baggage.

Trump-appointed Supreme Court Justices Neil Gorsuch, Brett Kavanaugh, and Amy Coney Barrett all voted to strike down Roe v. Wade in Dobbs v. Jackson Women’s Health Organization, ruling that there is no constitutional “right” to abortion and that states may pass their own pro-life laws.

Trump also withdrew the U.S. from the globalist Paris Climate Agreement and at the beginning of the global coronavirus outbreak, in April 2020, withdrew American funding from the pro-abortion World Health Organization, a United Nations entity that is heavily tied to Communist China. On Trump’s watch, though, the U.S. endured devastating lockdowns to “slow the spread” of COVID-19 – lockdowns overseen and orchestrated by government bureaucrats like Anthony Fauci and Deborah Birx who were essentially unpunished by Trump. The extreme turmoil of 2020 – forced-masking of toddlers, economic ruin thanks to closure of “nonessential” businesses, devastating learning loss from school closures, riots, inhumane hospital policies that forced people to die alone and banned fathers from being in the delivery room as their children were born – occurred under Trump’s watch, as did “Operation Warp Speed,” which accelerated the development of mRNA injections that in 2021 were then forced upon many Americans as a condition of employment or societal participation.

As president, Trump was impeached twice. He has been the target of what conservatives argue has been a never-ending witch hunt that they say has evolved into political persecution, giving as a prominent example the FBI raid of Mar-a-Lago (as well as his being “unbanked” and banned on major social media platforms).

One exception to Republicans’ lackluster performance in the midterms was Florida Gov. Ron DeSantis, who won re-election by over one million votes. He had previously been elected very narrowly, with fewer than 33,000 votes more than his then-opponent.

DeSantis is regarded by many commentators as Trump’s most formidable potential primary opponent; the latter made several jabs at him leading up to and on election day.