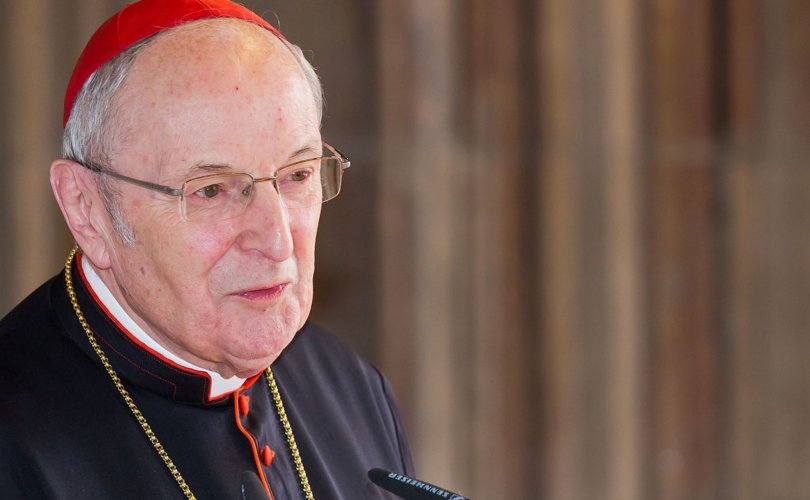 July 5, 2017 (LifeSiteNews) – Cardinal Joachim Meisner, one of the four cardinals who sent Pope Francis the dubia asking for clarity on Amoris Laetitia, died at 83 today still awaiting the clarification.

He died peacefully in his sleep while on vacation in the German municipality of Bad Füssing, domradio.de reported. He fell asleep holding his breviary and preparing to offer Mass, according to Cologne Cardinal Rainer Woelki.

Meisner, the archbishop emeritus of Cologne, defended Catholic doctrine for many years before signing onto the dubia.

Notably, he remained calm when a topless abortion supporter jumped onto the Cologne altar during Christmas Eve Mass in 2014 as Meisner was offering Mass. She had written “I am God” on her torso.

“I’m 80 years old. I've lived through so much. First the Nazi period, then the entire Communist period. Something like this can't shock me after that,” Meisner said of the incident.

Cardinal Raymond Burke told the National Catholic Register that Meisner “inspired me deeply by his profound love of Christ and of His Mystical Body, the Church.”

“He spared no effort in showing that love clearly and courageously in practice,” said Burke. “May he be granted the reward of the good and faithful servant. May he rest in peace.”

Meisner held a doctorate in theology and was a member of the Council of Cardinals for the Study of Organizational and Economic Affairs of the Holy See.

Meisner spoke out about the evil of abortion and established a $9.1 million fund dedicated to supporting marriage and the family.