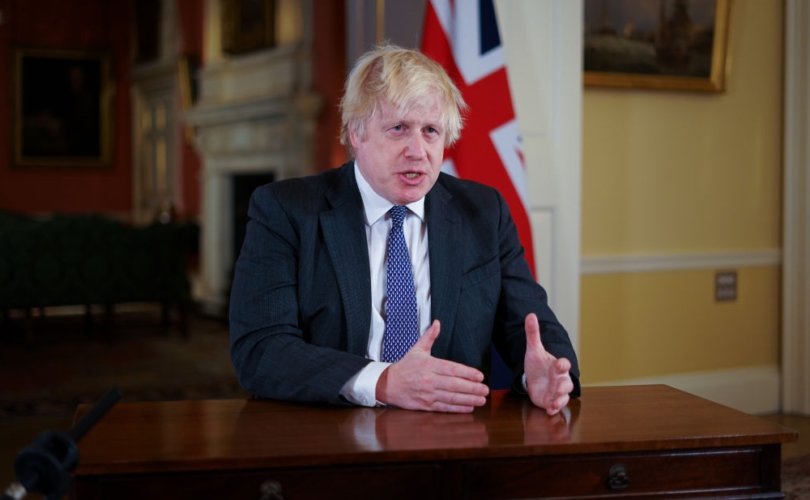 LONDON, U.K. (LifeSiteNews) – In a vote of 369 –126, politicians in the U.K.’s House of Commons approved the use of vaccine passports in certain settings, such as nightclubs and other large venues in England, in a move which has been described as creating “2nd class citizen[s].”

The December 14 vote came as Prime Minister Boris Johnson hyped up fear over the Omicron variant of COVID-19. He announced the “Plan B” winter restrictions, such as increased face mask mandates and vaccine passports, hours after intensified media reports about alleged illegal gatherings at Downing Street, during last November’s lockdown and December’s restrictions on socializing.

A total of 369 Members of Parliament (MP’s) voted for the use of vaccine passports, while 126, including 98 of Johnson’s own Conservative MP’s, voted against the measures.

The pass can be used to gain entry to such venues by showing proof of vaccination – which will soon include the booster jabs – or proof of a positive COVID test in the last six months. It can also be used to demonstrate proof of a negative lateral flow test in the past 48 hours. Hence individuals who choose not to have the abortion-tainted injection, can present evidence of a negative test result and gain access to the restricted venues.

The predominant use of the passport will be via the NHS COVID app, although individuals can request a paper document showing the information. The measures take effect immediately.

Regardless of my Vaccine status I am now a 2nd class citizen because I will never carry a Vaccine Passport.

I am now part of a minority, segregated, discriminated against & treated as dangerous.

The size of the Conservative rebellion surprised many, with the most generous estimates before the vote suggesting that only 80 Conservative MP’s would rebel against Johnson’s move.

Some have taken encouragement from the size of the Conservative rebellion, suggesting that Johnson will now have to be very cautious about any future restrictions. Conservative MP Mark Harper, who opposed the measures, said that the size of the opposition “sends a clear message and I hope that message is listened to and acted on…You either listen and you respond and you do things differently or you ignore what you have been told and you plough on regardless and then this will happen over and over again.”

Sir Geoffrey Clifton-Brown MP added that Johnson would now have to “think very carefully about how he’s going to reset his performance to actually govern with a united party.”

“This is a very, very specific line being drawn in the sand now and I think the Prime Minister and his team need to listen,” said vocal lockdown opponent, Sir Charles Walker.

Anna Mikhailova, deputy political editor of The Mail on Sunday, also noted that the size of opposition to the passports may have taken Johnson and his aides by surprise.

However, with the support of the Labour Party, (as has been consistent on COVID-related restrictions) Johnson’s COVID passport scheme passed safely, though former head of the Labour Party Jeremy Corbyn was one of eight Labour MP’s who opposed the measures.

Jacob Rees-Mogg, arguably the U.K.’s best known pro-life and Catholic politician, and current leader of the House of Commons, continued his record of voting for COVID restrictions, and supported the COVID pass.

The approval of vaccines passport marks yet another broken promise from Johnson’s government during the COVID era, as back in January 2021, then vaccines minister Nadhim Zahawi categorically ruled out any such measures.

.We have no plans to introduce vaccine passports. We have vaccinated, as of yesterday, 2,431,648 first dose and 412,167 second dose. No one has been given or will be required to have a vaccine passport. @NHSuk @Emily_JR_Lawson

Writing on Twitter, pro-life leader of the Heritage Party David Kurten described the vote for “medical apartheid” as “DEPLORABLE.”

DEPLORABLE: MPs vote for ‘vaccine passports’ / medical apartheid in England by 369 to 126.
The @HeritagePartyUK will reverse this immediately given the chance to do so.

In a peculiar occurrence, a report emerged from a prominent lockdown critic, noting that the NHS COVID app actually announced that vaccine passports would be mandatory, even before the MP’s had finished voting on the measures.

MP’s engaged in passionate debate prior to voting, with Miriam Cates decrying the removal of freedoms during the COVID-era.

MP’s also voted to approve mandatory vaccination as a pre-requisite for employment in the National Health Service (NHS) and for social care staff. The move, passed by 385–100, now requires frontline NHS staff who work face-to-face with patients, and social care staff, to be fully injected by April 2022.

Martin Daubney, the deputy leader of the Reclaim Party, a party firmly opposed to COVID restrictions, joined numerous others by quickly slating the Parliamentary support for the mandatory vaccine.

“Utterly disgusting as mandatory vaccines vote goes through 385 votes to 100. That means 385 MPs are OK with 70,000 NHS staff being sacked as we approach winter.”

That means 385 MPs are OK with 70,000 NHS staff being sacked as we approach winter

The sheer inhumanity of this, plus how we have surrendered liberty to a virus that now kills 0.096% is criminal 😔

A governmental assessment from November, suggested that 126,000 unvaccinated healthcare staff could leave the profession over the mandate, yet MP’s approved the measures nonetheless.

Scotland, Northern Ireland and Wales have already implemented a vaccine passport scheme. Scotland has mandated their use in the same settings as England, although indoor events larger than 500 people must use passports, regardless of whether the event is seated or not.

Northern Ireland and Wales have a much wider use of the vaccine passports, with cinemas, theatres and even hospitality venues forced to use them.