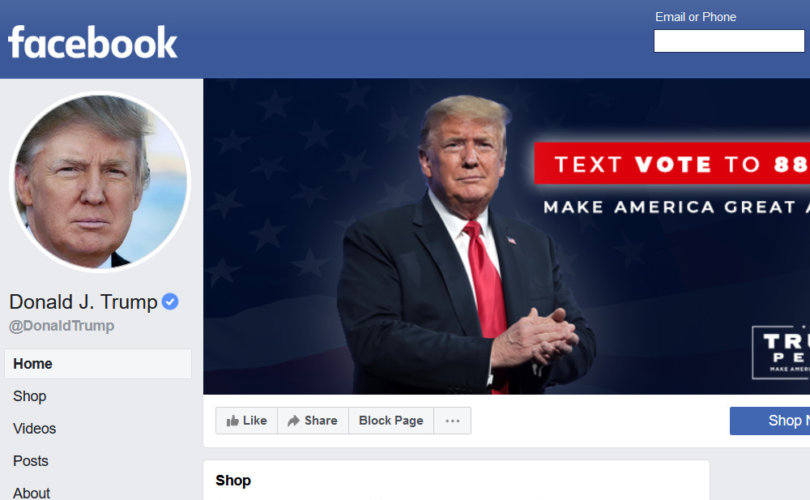 WASHINGTON, D.C., January 7, 2021 (LifeSiteNews) — In an unprecedented move, social media giant Facebook has banned President Donald Trump from its platform “indefinitely,” alleging that he is seeking to “undermine” the transition of power to Joe Biden.

Facebook founder and CEO Mark Zuckerberg announced the news on his Facebook profile this afternoon: “The shocking events of the last 24 hours clearly demonstrate that President Donald Trump intends to use his remaining time in office to undermine the peaceful and lawful transition of power to his elected successor, Joe Biden.”

The Big Tech company was referring to hundreds of protestors entering the Capitol building yesterday, while the official counting of the electoral college vote was ongoing. Blame has been leveled at Trump for promoting the protests, though evidence is now emerging suggesting that antifa activists were actually involved in inciting the crowds.

Zuckerberg continued: “His decision to use his platform to condone rather than condemn the actions of his supporters at the Capitol building has rightly disturbed people in the US and around the world. We removed these statements yesterday because we judged that their effect — and likely their intent — would be to provoke further violence.”

Zuckerberg wrote that while Facebook “allowed President Trump to use our platform consistent with our own rules … the current context is now fundamentally different, involving use of our platform to incite violent insurrection against a democratically elected government.”

— Article continues below Petition —
President Trump: Please pardon all involved in the case of Lisa Miller
Show Petition Text
6115 have signed the petition.
Let's get to 7500!
Thank you for signing this petition!
Add your signature:
Show Petition Text

“We believe the risks of allowing the President to continue to use our service during this period are simply too great. Therefore, we are extending the block we have placed on his Facebook and Instagram accounts indefinitely and for at least the next two weeks until the peaceful transition of power is complete.”

The move comes hours after Twitter suspended the president’s account for 12 hours, having deleted some of his tweets for the first time ever shortly before. Some of the president’s messages still remain, in which he urged protestors to “respect the Law.”

Despite the president calling for peace and posting a video repeating the same call, telling supporters to “go home,” Twitter claimed that the video posed “a risk of violence.” If the tweets are not removed after the 12 hours suspension is lifted, then “the account will remain locked.”

While Trump’s video message yesterday was removed by YouTube, his account still remains on the video platform at time of writing.

However, it is not just social media companies who are launching a digital purge of the president’s online presence, as Shopify has deregistered the Trump Store, claiming that Trump had violated the company policy of promoting violence.

In a statement made to TechCrunch, the company said: “Based on recent events, we have determined that the actions by President Donald J. Trump violate our Acceptable Use Policy, which prohibits promotion or support of organizations, platforms or people that threaten or condone violence to further a cause. As a result, we have terminated stores affiliated with President Trump.”

Visitors to TrumpStore.com and shop.donaldjtrump.com are now greeted with error messages.