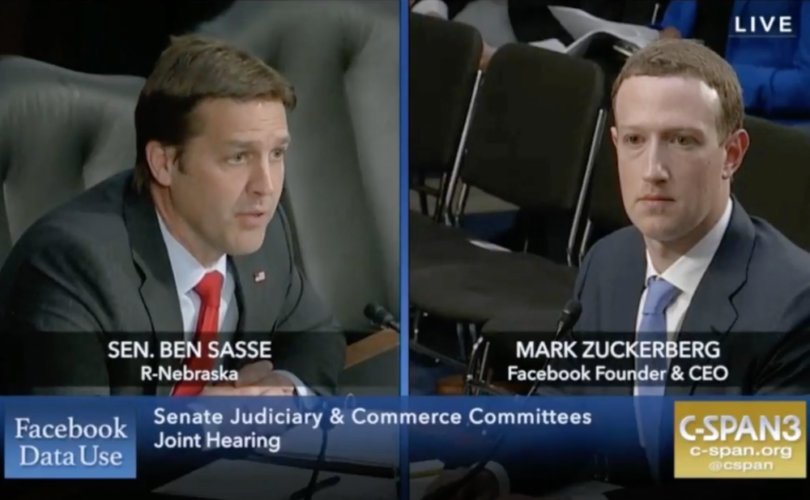 Zuckerberg made the remark under questioning by Sen. Ben Sasse.

The Nebraska Republican began by asking whether Facebook had a specific definition of hate speech it used to identify content warranting removal, particularly in more subjective cases where some argue that particular speech is “psychologically” harmful.

“We see this happen on college campuses across the country; it’s dangerous,” Sasse said. “40% of Americans under age 35 tell pollsters they think the First Amendment is dangerous, because you might use your freedom to say something that hurts somebody else’s feelings.”

“Guess what, there are some really passionately held views about the abortion issue on this panel today. Can you imagine a world where you might decide that pro-lifers are prohibited from speaking about their abortion views on your platform?” he asked.

Zuckerberg answered that he “certainly would not want that to be the case.”

Playing devil’s advocate, Sasse countered that it “might really be unsettling to people who had an abortion to have an open debate about that,” echoing a similar justification often made for buffer zones keeping pro-life protesters away from abortion facilities.

“It might be, but I don’t think that that would fit any of the definitions of what we have,” Zuckerberg answered. “But I do generally agree with the point that you’re making, which is that as we’re able to technologically shift toward, especially having [artificial intelligence] proactively look at content, I think that’s going to create massive questions for society about what obligations we want to require companies to fulfill.”

Zuckerberg said he thinks the United States needs to “struggle” with those questions and decide on a set of principles to guide such rules in the future.

Sasse then said that he hoped Zuckerberg did not leave Capitol Hill under the impression that Congress had a “unified view…that you should be moving toward policing more and more speech.” He agreed that calls to violence and human trafficking had no place on the platform, but stressed that “adults need to engage in vigorous debates.”

After that, he moved on to a brief exchange about privacy issues, which were the primary focus of the day’s testimony.

Despite Zuckerberg’s assurances, recent months have seen several instances of Facebook restricting pro-life content. In January, Facebook blocked the creators of pro-life documentary Roe v Wade: The Movie from sharing the paid ads for its crowdfunding page. In November, Facebook censored, without notice or explanation, advertising by Wexford/Missaukee Right to Life in Michigan, though in that case it relented following media coverage of the scandal.

Over the past several months, numerous conservative and pro-life publications, including LifeSiteNews, have seen significant declines in Facebook traffic.