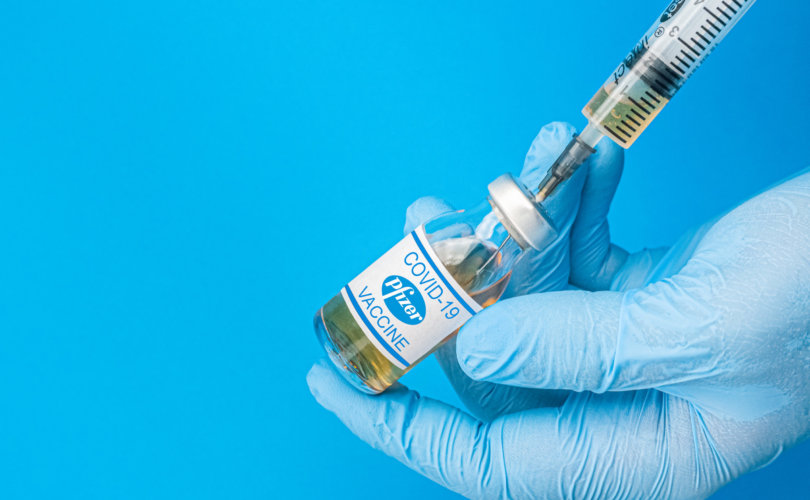 December 10, 2020 (LifeSiteNews) — An FDA advisory panel voted 17-4 today to recommend emergency use authorization (EUA) of the Pfizer-BioNTech COVID-19 vaccine, favoring the opinion that its benefits “outweigh its risks for use in individuals 16 years of age and older.”

Diana Zuckerman, Ph.D, president of the National Center for Health Research, stressed during the panel meeting that “the EUA is not approval, and it should have more restrictions than you’d have for approval.” The EUA, which would allow select groups of people to take the Pfizer vaccine before a months-long full approval process, is completed.

“We need long-term data to fully understand if the benefits outweigh the risks for frail patients, and for all races and ethnicities, and for all patients,” said Zuckerman.

Rossi Hassad, a professor at Mercy College with expertise in epidemiology, acknowledged that during Pfizer vaccine trials “there were frequent mild and moderate adverse effects, which are recognized as common side effects of vaccines.”

“Ongoing monitoring of this vaccine is imperative,” Hassad noted.

Pfizer is notable for being one of several vaccine producers that Robert F. Kennedy, the nephew of John F. Kennedy and an environmental attorney, called “convicted serial felon(s)” during a July debate with Alan Dershowitz.

“In the past 10 years, just in the last decade, those companies have paid $35 billion in criminal penalties, damages, fines, for lying to doctors, for defrauding science, for falsifying science, for killing hundreds of thousands of Americans knowingly,” Kennedy said.

In January 2020, a class-action lawsuit was filed “accusing Pfizer of hiding the fact that Zantac contains a carcinogen,” reported Becker’s Hospital Review.

In 2009, Pfizer Inc. paid $2.3 billion, “the largest health care fraud settlement in the history of the Department of Justice,” according to the DOJ, for illegally promoting drugs for off-label use or at unapproved dosages.

According to the U.K.’s Independent, Pfizer, the owner of the COVID-19 mRNA vaccine BNT162b2, has been given indemnity in the United Kingdom, which means that people who suffer damage from the vaccine will not be able to sue the company.

U.K. government-provided safety instructions for the Pfizer COVID-19 vaccine state that there is “no or limited data” on the vaccine regarding fertility, pregnancy and lactation, and “it is unknown whether COVID-19 mRNA Vaccine BNT162b2 has an impact on fertility.”

The guide advises that women avoid pregnancy before vaccination and “for at least two months after their second dose.” The guide also specifies that the vaccine “should not be used during breast-feeding,” because “a risk to the newborns/infants cannot be excluded.”

The guide also noted that side effects were commonly experienced by the vaccine trial volunteers, including chills experienced by over 30 percent, headache (over 50 percent), and fatigue (over 60 percent). According to the Daily Mail, one of the participants in Pfizer’s vaccine trial “said she suffered a headache, fever and aches all over her body that became ‘more severe’ after the second dose.”

Pfzier’s vaccine must be stored at -70°C (-94°F) – nearly twice as cold as the North Pole’s average temperature in the winter, and “20 degrees colder than extreme winter temperatures at the South Pole,” as CBS News has noted.

This is because, as Fast Company reminded readers, the Pfizer vaccine will be the first-ever vaccine to use “an as-yet-unproven technology platform that relies on something called messenger RNA, usually shortened to mRNA.”

According to Margaret Liu, a vaccine researcher who chairs the board of the International Society for Vaccines, the reason the Pfizer vaccines needs to be kept at such an extremely cold temperature is because mRNA is “really easily destroyed,” NPR reported.

The mRNA vaccine works by injecting mRNA, which is a kind of “blueprint” for proteins that triggers cells to produce their own protein antibodies to block and destroy the virus so the person will not become infected.

“We’ve never created a new vaccine in less than five years,” Bill Gates said while explaining how the RNA vaccine works. “So this is urgent. It’s gonna have to go to seven billion people,” he said.