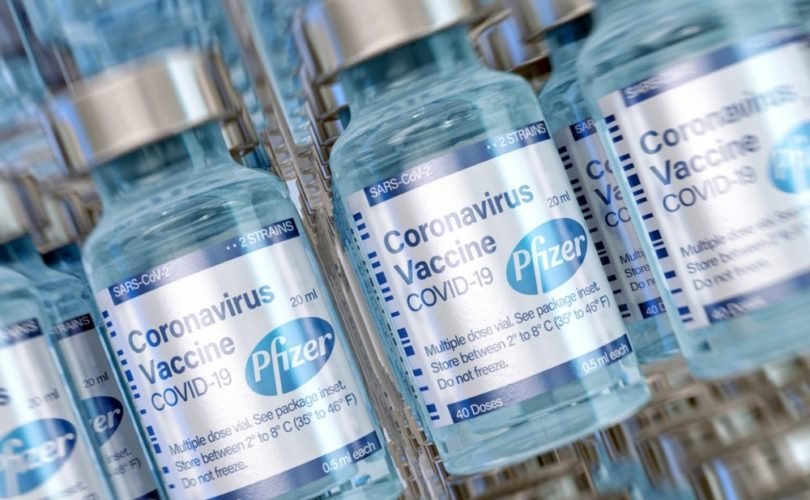 (LifeSiteNews) — The U.S. Food and Drug Administration (FDA) on Friday authorized COVID-19 Pfizer and Moderna booster shots for everyone over 18. The U.S. Centers for Disease Control and Prevention is expected to officially sign off on the boosters soon, which will be available to anyone six months after a Pfizer or Moderna two-shot regimen or just two months after a Johnson & Johnson jab.

Emergency use authorization (EUA) was already granted for boosters for people over 65, people with certain immune system issues or health problems, and those who work in “high-risk” professions. Just last month the CDC approved a fourth booster shot for the “immunocompromised,” and a third for pregnant women.

Americans can “mix and match” boosters even though in July the World Health Organization (WHO) warned against the practice.

“It’s a little bit of a dangerous trend here. We are in a data-free, evidence-free zone as far as mix and match,” said Soumya Swaminathan, the chief scientist of the pro-abortion WHO.

“It’s hard to understand how third and fourth ‘doses of protection’ are going to work when the first ones don’t work after only a few months,” Mary Holland, president and general counsel at Children’s Health Defense, told LifeSiteNews. “Given the officially reported injuries and deaths, and the lack of knowledge about long-term effects, it is grossly irresponsible for [the] government to recommend boosters.”

American lockdown czar and chief White House medical advisor Dr. Anthony Fauci said Wednesday, “Enough is enough. Let’s get moving on here. We know what the data are. Let’s do it, 18 and above, everybody should get vaccinated, should get boosted.”

The press release noted, “Both Pfizer and Moderna are conducting post-authorization/post-marketing studies to assess known serious risks of myocarditis and pericarditis.”

The push to vaccinate the majority of the world’s population in order to prevent serious disease for those who are not at risk to begin with – the CDC reports an infection survival rate of greater than 99.95% for those under age 50 — adds to the skepticism surrounding the increased push for COVID booster shots. Meanwhile the list of FDA-recognized adverse events has grown from severe anaphylactic reactions to include fatal thrombotic events, the inflammatory heart condition myocarditis, and neurologically disabling disease like Guillain Barré Syndrome.

It remains a concern that these figures are just “the tip of the iceberg,” as a 2010 Harvard-executed study commissioned by the U.S. Department of Health and Human Services (HHS) indicated that reported vaccine injuries to VAERS represent an estimated 1% of actual injuries. While causation is not explicitly confirmed through VAERS, neither can it be presumed that all side effects are reported. Indeed, one study in 2010 found that “fewer than 1% of vaccine injuries” are reported to VAERS, suggesting the actual numbers of deaths  and  injuries are significantly higher.

The expected roll-out of boosters for all COVID-vaccinated adults comes less than three weeks after Florida Gov. Ron DeSantis (R) warned that booster shots will be needed in order for people to be considered “fully vaccinated,” for which he was widely mocked and “fact-checked” by leftists.

“A year and a half ago we started with 15 days to slow the spread, and now it’s gone to get jabbed or lose your job,” DeSantis said.

“This is just the tip of the iceberg,” he warned. “It’s going to get more restrictive; there’s going to be more power brought to bear going forward if we don’t stand up now and fight back … They’re going to tell you: ‘You have to get a booster, otherwise you could face loss of employment or either types of penalties.'”

Just a few days ago Fauci said boosters may be part of what’s needed to be considered “fully vaccinated.”

“A booster isn’t an add-on and a booster is part of what the original regimen should be,” said Fauci. “So that when we look back on this, we’re going to see that boosters are essential for an optimal vaccine regimen.”

In Austria, starting in February, citizens could be subjected to four weeks in prison or a fine of 3,600 Euros (roughly $4,000 USD) for being unvaccinated. Failure of Austrians to receive booster shots could result in a fine of 1,450 Euros (roughly $1,600 USD) or a prison sentence of four weeks.