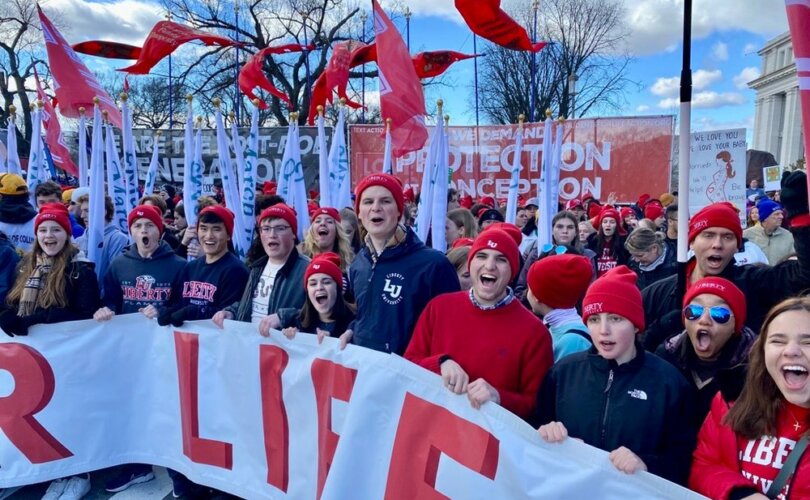 Marchers at the 2023 March for LifeLifeSiteNews

WASHINGTON, D.C. (LifeSiteNews) — At least tens of thousands of pro-lifers braved the cold today to march to the U.S. Capitol building for the 50th annual March for Life, for the first time celebrating the fall of Roe v. Wade instead of having to again demand it be overturned.

As the first national March to occur since the U.S. Supreme Court overturned Roe in 2023’s Dobbs v. Jackson Women’s Health Organization, the theme this year is “Next Steps: Marching into a Post-Roe America.” As such the path concluded not at the Supreme Court building but at the Capitol, where legislative battles will continue over taxpayer funding of Planned Parenthood, Democrat efforts to codify a “right” to abortion, federal protections for the preborn, and more.

The large turnout reflects both the energy of pro-life activists heartened by the overturn of Roe, and the fact that COVID-19 restrictions on mass public gatherings have largely been abandoned. The in-person March for Life was canceled in 2021, citing the “fact that we are in the midst of a pandemic which may be peaking, and in view of the heightened pressures that law enforcement officers and others are currently facing in and around the Capitol.”

One of the most rousing speeches before the March came from Casey Gunning, who has Down syndrome. Her twin sister, Sister Mary Casey O’Connor, S.V., introduced her as her “biggest hero.”

“I have Down syndrome, but Down syndrome does not define me. I am defined by God. God put a price tag on every life. And He says we are all priceless. Born and unborn, disability or not, we’re all priceless,” said Gunning, who spoke about being a Special Olympics gold medalist, attending college, and working at a daycare.

Here at the 50th annual @March_for_Life, the first since the overturn of Roe. Follow along for updates! pic.twitter.com/7wuLvopAoh

‘Pro-lifers certainly have our work cut out for us’

On Thursday, LifeSiteNews attended the pre-March expo, which was held for the first time in two years. LifeSiteNews joined pro-life groups from across the country for the event, discussing the importance of continuing to march as a nation in defense of the unborn even after the Dobbs decision returned to individual states the authority to determine their own abortion laws.

“We need to keep fighting and marching with a new vision in mind that our constitution, based on the Fourteenth Amendment, entitles every child to the right to life from conception. So that’s why we march,” Live Action’s Mikayla Simpson told LifeSiteNews.

John Martin, executive vice president for mission advancement at Human Life International, added that Roe’s reversal has “created a much bigger issue of why we need to march. The state marches are now more important, but we need to be here to let Congress know this is what we need, this is what we want as Americans, to respect all human life.”

“Pro-lifers certainly have our work cut out for us,” said Catholic University professor Dr. Michael New. “They’ve really made it a point to go after peaceful pro-life sidewalk counselors. I’m very concerned by the expansion of chemical abortion drugs. I think it’s terrible that pharmacies can now stock them. Places like CVS and Walgreens have indicated they’re going to make them available.”

One young person told LifeSiteNews that “we really need to continue to march for life and continue to save anyone that we can because that’s our duty as Christians.”

“It’s just beginning,” said Marelise Pineiro of The Vulnerable People Project. “We all got to get on board, work even harder than we have been in the past.”

She added that she is “optimistic and hopeful” about pro-life efforts moving forward in a post-Roe world.

Roe’s overturn sparked the activation of numerous state pro-life laws across the country, from pre-Roe bans that had been invalidated by the ruling to more contemporary bans and restrictions enacted in anticipation of a reversal — a trend that has saved thousands of lives.

Across the country, Planned Parenthood has suspended abortions and/or closed locations in reaction to Roe’s fall, and pro-life attorneys general have declared their intentions to enforce their states’ duly enacted abortion prohibitions.

But leftists prosecutors in various localities have vowed not to enforce pro-life laws, and pro-abortion activists have refocused efforts on the aforementioned pill distribution, supporting interstate travel for abortion, and enshrining “rights” to abortion in state constitutions, ensuring that work and debate will continue over the prospect of banning abortion nationally.

Meanwhile, President Joe Biden has called for electing more Democrats to Congress to support codifying a “right” to abortion on demand in federal law, which would not only restore but expand upon the Roe status quo, by making it illegal for states to pass virtually any pro-life laws.