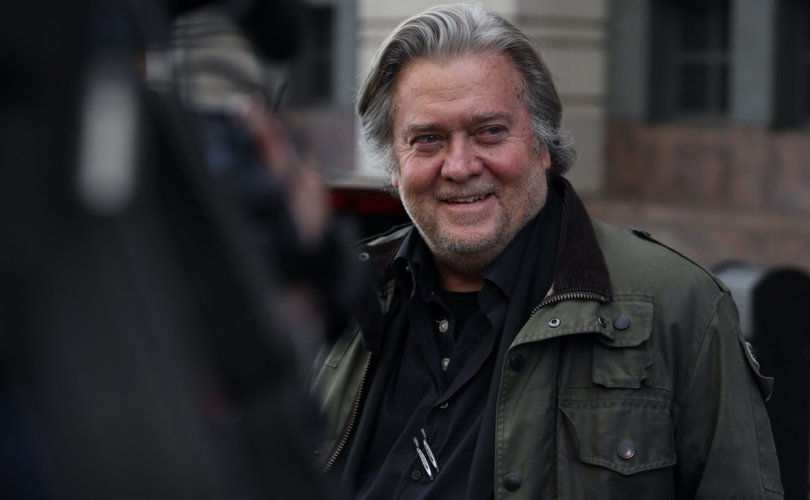 Today the U.S. president’s former chief strategist was charged by prosecutors in New York for fraud and conspiracy to commit money laundering. Bannon was taken into police custody.

The charges, which have also been laid against three other men, concern a crowdfunding campaign called “We Build the Wall.” The indictment alleges that Bannon and his fellow campaigners misled donors when they assured them that organizer Brian Kolfage would not be taking money from the campaign as a salary. Bannon allegedly had stated that We Build the Wall was “a volunteer organization.”

The campaign raised over $25 million.

The grand jury charges that Bannon, Brian Kolfage, Andrew Badolato, and Timothy Shea “collectively received hundreds of thousands of dollars in donor funds from We Build the Wall, which they each used in a manner inconsistent with the organization’s public representations.”

Kolfage allegedly took more than $350,000 from the fund for his personal use whereas Bannon allegedly received over $1 million from We Build the Wall through a non-profit organization. The grand jury claims that Bannon then “secretly paid Kolfage” and used hundreds of thousands of dollars for his own “personal expenses.” It says that Kolfage, Bannon, Badolato, and Shea worked out a plan to hide the money transfers through a non-profit controlled by Bannon and a shell company controlled by Shea, among other venues.

Originally named “We the People Build the Wall,” Kolfage launched the crowdfunding campaign in 2017. It purported to be collecting funds to donate to the U.S. government to build a wall on the American-Mexico border. According to the indictment, the webpage told readers that “100% of your donations” would go towards this cause and that if it failed the organizers would “refund every single penny.”

The campaign raised about $17 million in its first week. However, after criticism of Kolfage’s background and the government as the beneficiary of the funds, the crowdfunding website hosting the campaign suspended it in late 2018. Kolfage was told to name a legitimate non-profit organization to which the funds could be transferred or the site would refund the money. At this point, the indictment alleges, Steve Bannon and Andrew Badolato were recruited to the leadership of the campaign.

It goes on to say that Kolfage, Bannon, and Badolato set up a new Section 501(c)(4) organization called We Build the Wall, Inc. and proposed that the money be transferred into it. It alleges that the modified aim of the organization was to fund a private company to build the border wall and that it promised the crowdfunding website that Kolfage would not take a salary.

According to the indictment, in January 2019 We Build the Wall told donors that the money would be going to a private company, not the government, and that they would have to “opt in” for their donation to go through. It promised donors that “100%” of their money would go towards building the wall and that Kolfage would not receive “a penny.” Apparently these promises were repeated often, and Kolfage even asked supporters to patronize his coffee business as it was the only means by which he could support his family.

The grand jury claims that that there were text messages between Bannon and Badolato agreeing that the promise that Kolfage “will not be paid a dime” was an effective fundraising tool. There were also explicit promises none of the leadership or board would receive money from the campaign.

But whereas some money was spent on the construction of the border wall, the indictment states that “hundreds of thousands of dollars were siphoned out of We Build the Wall” for the personal use of Kolfage, Bannon, Badolato, and Shea.

The charges reference several text messages and emails sent from one defendant to another about the alleged scheme.

The indictment states that as a result of committing fraud, all money and personal possessions obtained through the We Build the Wall campaign should be forfeit to the United States. This includes the contents of 11 bank accounts, a boat, and a Land Rover.

Stephen Bannon was a founder of Breitbart News but became internationally famous when he was chosen in 2016 by Donald Trump, then the president-elect, as his chief strategist and senior counsellor. He was already a controversial figure even among conservatives; some accused him of using Breitbart to support Trump’s nomination as the Republican presidential candidate at the expense of Senator Ted Cruz. Liberals, most notably the abortion business Planned Parenthood and its allies, vociferously expressed their loathing for Bannon.

But Bannon had the full confidence of the president and in January 2017 was given a seat on Trump’s National Security Council. He left some months later to return to his work at Breitbart. After January 2018, a marked coolness sprung up between Trump and Bannon because of remarks attributed to Bannon in journalist Michael Wolff’s Fire and Fury: Inside the Trump White House.

Bannon left Breitbart but remained in the political game, supporting populist movements around the world. He also took up a new role in journalism as the host of The War Room, part of a media enterprise owned by dissident Chinese billionaire Guo Wengui. Bannon, a Catholic, is a fierce critic of Pope Francis’ China policy.

LifeSiteNews interviewed Bannon in June 2019 about the ongoing crisis in the Church.

Trump distanced himself from Bannon today.

“Speaking with reporters during a visit with Iraqi Prime Minister Mustafa Al-Kadhimi, Trump said he wasn't aware of Bannon's dealings and that he hadn't been in contact with him for a long time,” Politico reported.

“It’s a very sad thing by Mr. Bannon… I didn't like that project. I thought it was a project being done for showboating reasons,” Trump commented. “I didn’t want a wall that was going to be an inferior wall.”

“It was something I very much felt was inappropriate to be doing.”

This is a developing story that has been updated. LifeSiteNews will continue to provide updates as they become available.