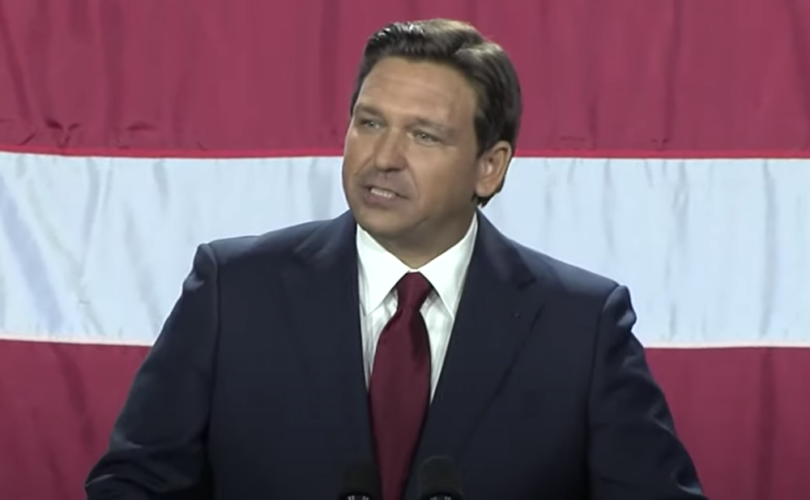 TALLAHASSEE (LifeSiteNews) – Gov. Ron DeSantis of Florida won re-election to a second term on Tuesday, crushing Democratic congressman and former Gov. Charlie Crist and strengthening his position in the GOP amid widespread speculation that he may run for president in 2024.

DeSantis quickly took a commanding lead over Crist, who trails the popular conservative governor by a staggering 1.5 million votes with 98 percent of ballots counted. News outlet called the race around an hour after polls closed.

DeSantis’ 19-point margin of victory is the largest in a Florida governor’s race since 1982.

At a packed rally Tuesday night, DeSantis thanked Florida voters for delivering him a “win for the ages.”

“We chose facts over fear, we chose education over indoctrination,” he said, touting his handling of COVID-19 and his record of defending parents’ rights. “After four years, the people have delivered their verdict: Freedom is here to stay.”

“Thanks to the overwhelming support of the people of Florida, we not only won election, we have rewritten the political map,” he declared.

DeSantis, who won his first term in 2018 by a mere 32,000 votes, on Tuesday dominated even in traditional Democratic bastions, like Miami-Dade County, which had not voted Republican in a governor’s race in 20 years.

DeSantis’ resounding victory on Tuesday prompted an outpouring of support among conservatives and increased calls for him to launch a presidential bid.

DeSantis: "We have embraced freedom. We have maintained law and order. We have protected the rights of parents. We have respected our taxpayers, and we reject woke ideology…We will never ever surrender to the woke mob. Florida is where woke goes to die!"pic.twitter.com/O59Og21fpd

Ron DeSantis won his last gubernatorial race by 30,000 votes. He turned that into a historically large victory and along with the rest of the state GOP, turned a heretofore purple state bright red. Good things to remember for Republicans going forward.

DeSantis blew the competition away while much of the rest of the Republican Party underperformed. What exactly is the argument against DeSantis 2024?

The Florida governor has risen to national prominence since 2020 due to his uncompromising opposition to COVID-19 mandates, woke ideology, and LGBT indoctrination of children.

As states around the country imposed crushing pandemic restrictions over the past two years, Florida became known as a bastion of medical and economic freedom under DeSantis, banning vaccine passports and mask mandates and penalizing counties that forced workers to take the COVID-19 jabs. Last year, DeSantis signed legislation that made Florida the first state in the nation to fine businesses and schools for mandating the shots without exemptions or alternatives.

And Florida’s economy boomed as DeSantis resisted calls to shut it down: The Sunshine State’s labor force has grown more than five percent – five times the national rate – since DeSantis took office, and Florida recorded its highest-ever budget surplus this summer.

“Florida was a refuge of sanity when the world mad,” he said in his victory speech Tuesday night. “We stood as the citadel of freedom for people across this country and indeed across the world.”

“We have protected the rights of parents, we have respected our taxpayers, and we reject woke ideology,” he said.

DeSantis has been one of a small number of political leaders willing to openly criticize the harmful impacts of the experimental COVID jabs, particularly for children. His administration has refused to participate in the vaccine rollout for children under five years old, making Florida the only state to do so. Earlier this year, the Florida Department of Health, led by DeSantis appointee Dr. Joseph Ladapo, formally recommended against children and young men receiving the shots.

DeSantis has similarly taken on LGBT and far-left racial ideology. A parental rights bill that he signed in March bans discussions about sexuality and “gender identity” in Florida public schools through the third grace. When the Walt Disney Company declared its opposition to the law, DeSantis led a successful push to strip the corporation of its special tax status in the state.

He’s also prohibited gender-confused males from competing in women’s and girls’ sports and cracked down on drag queen shows for kids. The Florida Board of Medicine last week voted to forbid doctors from providing transgender surgeries and drugs for gender-confused youth, a move DeSantis had strongly encouraged.

In May, his ban on critical race theory in public school materials led publishers to remove “woke content” in more than a dozen textbooks. Other notable conservative achievements include a sweeping election integrity law, a prohibition on private election process funding, and a law that allows Florida residents to sue Big Tech companies for censorship.

DeSantis’ re-election victory additionally bodes well for pro-life efforts in Florida. He pledged this year to “expand pro-life protections” beyond a 15-week ban and a parental consent law that he has already signed. His office has reportedly focused on a heartbeat bill that would outlaw abortion at around six weeks, according to USA Today.

The surging Florida governor is a top contender for the 2024 Republican presidential nomination, but has so far declined to say whether he plans to run. His refusal to disavow a presidential campaign has increasingly drawn public attacks from former President Donald Trump.

Though Trump remains favored to win the GOP nomination, some polls have shown DeSantis beating the former president among Republican voters, including in Florida, Georgia, Michigan, and New Hampshire.

DeSantis’ victory margin on Tuesday was more than five times higher than that of Trump in the 2020 presidential election in Florida.