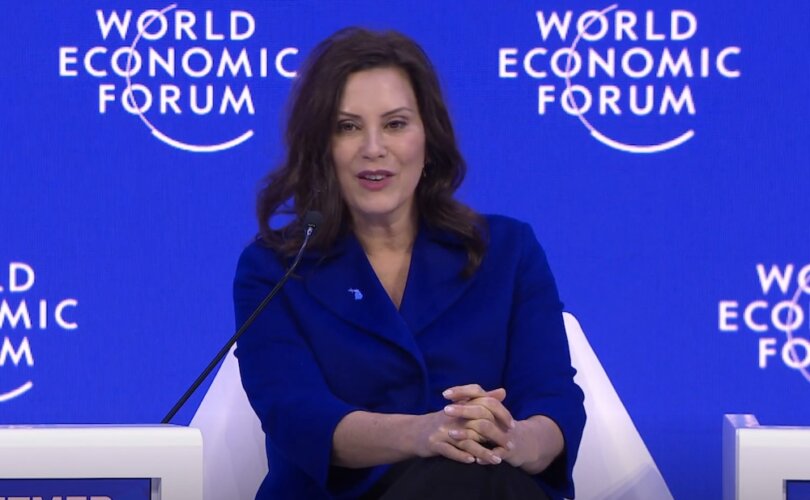 DAVOS, Switzerland (LifeSiteNews) — Michigan’s Democrat Gov. Gretchen Whitmer told a World Economic Forum audience Thursday that her state’s enactment of a pro-abortion constitutional amendment is one of the things that gives her hope for women’s representation in the future, along with Democrats’ success in the 2022 midterm elections.

Whitmer was speaking on a “Women’s Leadership” panel, the subject of which was “creat[ing] better pathways to advance more women into the highest levels of leadership.” Most of the conversation consisted of generic thoughts to that end, with emphasis on genuine women’s rights struggles in nations like Iran. But near the end of the program, Whitmer invoked abortion-on-demand, an issue American leftists have long attempted to conflate with legitimate civil rights causes.

“We had a midterm election in Michigan where I won reelection, my attorney general who also is a woman won reelection, my secretary of state who is also a woman won reelection, my lieutenant governor who is the first African American lieutenant governor in Michigan history also won reelection, and we passed a constitutional amendment to protect reproductive rights in the state of Michigan, and we flipped both our House and Senate,” Whitmer said, which “gives me hope that despite the misinformation and the anger and the, you know, how ugly politics has become, when the people are engaged and their voices count, you see real representation, and that gives me hope and I hope that it gives some of you hope as well.”

Whitmer was re-elected by a margin of 54-44% last November, defeating Republican challenger Tudor Dixon. What’s more, Michigan voters approved by a 57–43 percent margin an amendment to the Michigan Constitution enshrining a “right to make and effectuate decisions about all matters relating to pregnancy, including but not limited to prenatal care, childbirth, postpartum care, contraception, sterilization, abortion care, miscarriage management, and infertility care.”

According to former Michigan Solicitor General John Bursch, “Proposal 3 goes much farther than merely codifying  Roe v. Wade, invalidating more than two dozen Michigan pro-life laws and authorizing minors to obtain abortions without a parent’s consent or even notice.” Further, “because Proposal 3 grants this right to ‘every individual,’ without age limits, that means the proposal, on its face, authorizes a minor to obtain a sterilization without parental consent or even notice, such as when a minor desires to change his or her gender.”

“Abortion is now legal in Michigan at an unprecedented level, and millions of lives are at stake,” wrote Archbishop Allen Vigneron of Detroit in November. “We must pray and ask God for his mercy upon us for allowing this evil to happen in our state.”