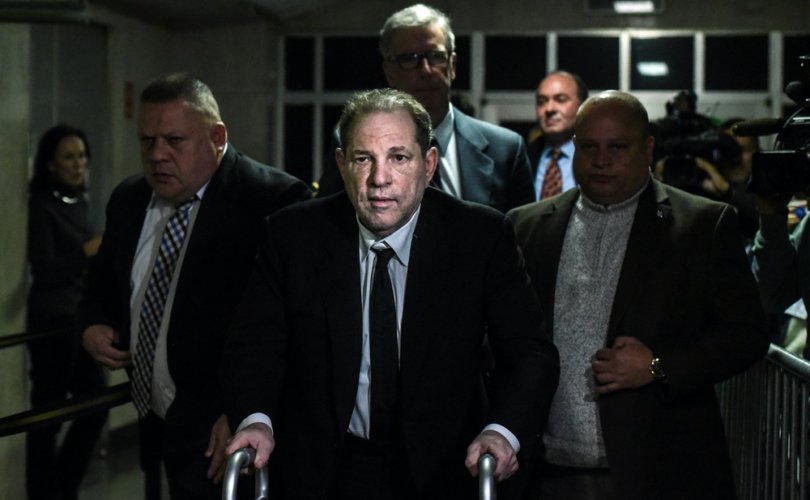 Weinstein, 67, has been charged with sexually assaulting one woman and raping another in 2013. Specifically, he has been charged with “one felony count each of forcible rape, forcible oral copulation, sexual penetration by use of force and sexual battery by restraint,” according to a press release produced by the Los Angeles County District Attorney’s office.

Weinstein appeared in a Manhattan courtroom today as part of his sex abuse trial in New York, where he faces separate rape and sexual assault charges.

“We believe the evidence will show that the defendant used his power and influence to gain access to his victims and then commit violent crimes against them,” Los Angeles District Attorney Lacey said in the press release.

“I want to commend the victims who have come forward and bravely recounted what happened to them. It is my hope that all victims of sexual violence find strength and healing as they move forward.”

The D.A.’s office specified that on February 18, 2013 Weinstein allegedly went to a hotel and raped a woman after pushing his way inside her room. Then, the next evening, he allegedly sexually assaulted a woman in a hotel room in Beverly Hills.

According to the BBC, Weinstein has been accused of sexual misconduct by over 80 women. By 2013, Weinstein’s misconduct was apparently an open secret to the glitterati of the entertainment industry.

Weinstein’s alleged crimes were first exposed in the press by journalists for the New York Times on October 5, 2017.

However, Hollywood insider Ronan Farrow, son of actress Mia Farrow, may have brought down the priapic producer for good with his Pulitzer Prize-winning October 2017 report for the New Yorker on Weinstein’s sexual assaults and exploitation of women in the film industry.

“For more than twenty years, Weinstein, who is now sixty-five, has also been trailed by rumors of sexual harassment and assault,” Farrow then wrote.

“His behavior has been an open secret to many in Hollywood and beyond, but previous attempts by many publications, including The New Yorker, to investigate and publish the story over the years fell short of the demands of journalistic evidence,” he continued.

“Too few people were willing to speak, much less allow a reporter to use their names, and Weinstein and his associates used nondisclosure agreements, payoffs, and legal threats to suppress their accounts. Asia Argento, an Italian film actress and director, said that she did not speak out until now—Weinstein, she told me, forcibly performed oral sex on her—because she feared that Weinstein would ‘crush’ her.”

Farrow later revealed that his friendly relationship with Hilary Clinton “went cold” while he was investigating Harvey Weinstein. He had served as a special adviser on global youth issues for Clinton between 2011 and 2012 when she was the Secretary of State.

Weinstein had been a booster for Clinton, contributing thousands of dollars to her run for the Senate in 1999 and encouraging others in Hollywood to back her political ambitions.