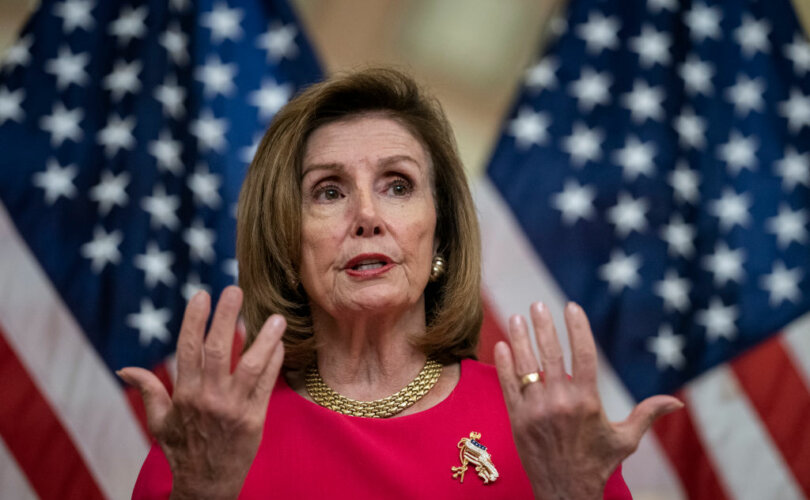 (LifeSiteNews) — The U.S. House of Representatives on Thursday passed Democrats’ bill to codify same-sex “marriage,” sending it to Joe Biden’s desk for signature.

The bill, the “Respect for Marriage Act” (RMA), passed in a 258-169 vote, with 39 Republicans and all Democrats voting in favor.

The Senate approved the RMA last week in a vote of 61-36. Twelve Republican senators voted for it, even after the Senate rejected three amendments proposed by Republicans to blunt the the bill’s grave harm to religious liberty.

Biden has pledged to sign the legislation “promptly and proudly.”

The Republican members of Congress who voted for the RMA on Thursday include Rep. Elise Stefanik of New York, the chairwoman of the House Republican Conference, and Rep. Tom Emmer of Minnesota, the incoming GOP whip.

The other 37 Republicans are:

Four Republicans did not vote, including Reps. Lee Zeldin of New York and Adam Kinzinger of Illinois, both of whom previously voted in favor of the RMA. Republican Rep. Burgess Owens of Utah voted “present.”

‘Respect for Marriage Act’ a major defeat for conservatives, the Republican base

The “Respect for Marriage Act” makes the redefinition of marriage the law of the land, including in the event that the Supreme Court overturns its 2015 Obergefell v. Hodges decision that mandates legal recognition of same-sex “marriage” nationwide.

The bill requires the federal government and all 50 states to recognize homosexual “marriages” and other civil marriages between two individuals lawfully performed in any state, potentially including incestuous and underage marriages. It also repeals the Defense of Marriage Act of 1996, which federally recognized marriage as between one man and one woman and guaranteed the right of states to uphold traditional marriage.

The RMA additionally poses serious threats to religious freedom, as numerous conservative and religious liberty organizations have repeatedly warned. The legislation applies to everyone “acting under color of law” – a phrase that has been interpreted to refer to state-funded services like adoption centers – and contains a “private right of action” clause that allows anyone “harmed by a violation” to bring civil action against alleged violators “for declaratory and injunctive relief.”

The Department of Justice and state attorneys general would also be able to bring civil actions under the bill.

The Senate adopted an amendment to the RMA ostensibly to address religious freedom concerns, but the amendment has faced blistering criticism from religious liberty advocates for lacking meaningful protections.

House Democrats blocked consideration of another amendment offered by Republican Rep. Chip Roy of Texas that would have prevented the government from taking “any discriminatory action against a person” for upholding traditional marriage.

Conservative Republican congressmen on Thursday slammed the RMA as a dangerous bill that disregards God’s law.

“I rise today in strong opposition to the so-called Respect for Marriage Act. Honestly, the bill should be called the ‘Disrespect for Marriage Act,’” Rep. Bob Good of Virginia said during debate on the House floor. “This bill certainly disregards God’s definition of marriage, a definition that has served his creation well for more than 5,000 years of recorded history.”

God’s definition “is the only one that really matters,” Good continued.

“This is yet another step toward the Democrats goal of dismantling the traditional family, silencing voices of faith and permanently undoing our country’s God-woven foundation,” said Rep. Vicky Hartzler of Missouri in an emotional speech prior to the vote, blasting the bill as “misguided and dangerous.”

“People of faith won’t forget this act by Congress,” commented the Heritage Foundation. “Rather, they’ll recommit to protecting our constitutional right to religious liberty & those who’ll face legal challenges and attacks in this horrible law’s wake.”

The misnamed “Respect For Marriage Act” is bound for Biden's desk. People of faith won't forget this act by Congress. Rather, they'll recommit to protecting our constitutional right to religious liberty & those who'll face legal challenges and attacks in this horrible law's wake.

Many of the most prominent conservative organizations in the United States, including the Heritage Foundation and Alliance Defending Freedom, as well as thousands of Christian churches and institutions, had implored Republicans to oppose the bill.

The RMA already passed the House in July with 47 Republican votes and the blessing of GOP leaders, including House Minority Leader Kevin McCarthy, who is heavily favored to become the next speaker of the House.

The bill had to clear the chamber again after being amended in the Senate.

Polling has consistently shown broad disapproval of the RMA among Republican voters.

A Heritage Foundation survey of likely voters in Indiana, Iowa, Utah, West Virginia, and Wyoming found that 70 percent of GOP voters in the five states opposed the legislation. Among all voters, 47 percent opposed it, and just 41 percent supported it.

A Economist/YouGov poll from September found that nearly 60 percent of Republican voters did not support the bill, compared to 30 percent that did.

Democrats introduced the RMA in the House in July following the Supreme Court’s reversal of Roe v. Wade, citing a concurring opinion from Justice Clarence Thomas in which he stated that the court should also revisit Obergefell.

Though Democrats initially intended the bill as a messaging stunt to smear Republicans before the midterm elections, its unexpectedly strong bipartisan support prompted Senate Democrats to take up the legislation.

Outgoing House Speaker Nancy Pelosi, who will step down from her leadership post in January, praised the bill as a “a glorious triumph” and a tool to combat “right-wing extremists.”

Pelosi, a nominal Catholic, was prohibited from Holy Communion this year by her local ordinary, Archbishop Salvatore Cordileone of San Francisco.