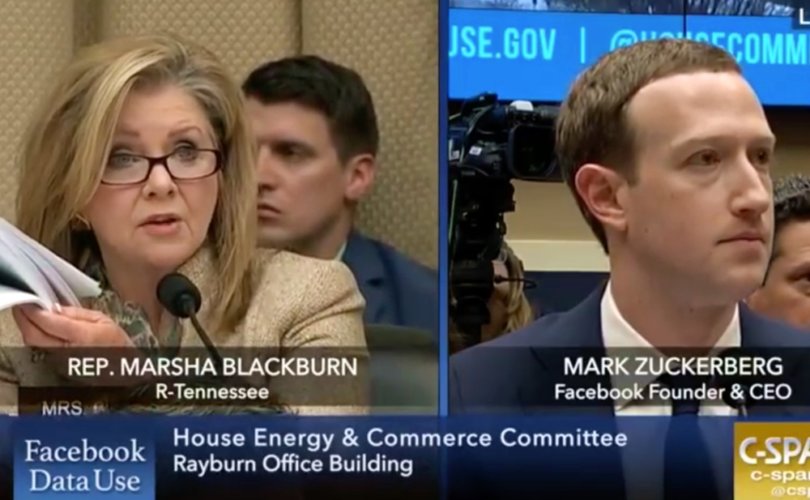 “We don’t think about what we’re doing as censoring speech,” Zuckerberg answered. “I think that there are types of content like terrorism, that I think that we all agree we do not want to have on our service. So we build systems that can identify those and can remove that content, and we’re very proud of that work.”

Blackburn retorted that “Diamond and Silk is not terrorism,” referencing the pair of popular conservative video bloggers flagged as “unsafe” by Facebook. Zuckerberg said earlier in the hearing that the judgment was made in error and that Facebook representatives had already contacted Diamond and Silk to reverse it. However, the bloggers say they have not received any follow-up from Facebook since taking the judgment public.

Rep. Steve Scalise, R-LA, also raised the subject, referencing Facebook head of news partnerships Campbell Brown’s February declaration that the platform would start “having a point of view” as to what constitutes “quality news.”

“I do want to ask you about a study that was done dealing with the algorithm that Facebook uses to describe what is fed to people through the news feed,” Scalise continued, “and what they found was after this new algorithm was implemented, that there was a tremendous bias against conservative news and content, and a favorable bias toward liberal content.” He said the study found a disparity of 16 points.

“Was there a directive to put a bias in?” Scalise asked.

Zuckerberg answered that “there is absolutely no directive in any of the changes that we make to have a bias in anything that we do.” Instead, he reiterated that he considers Facebook a “platform for all ideas.”

Scalise closed the subject by asking Zuckerberg to “go back and look and determine if there was a bias,” then notify Congress as to what actions Facebook would take to correct it. “Because that is disturbing when you see that kind of disparity,” he said.

According to analysis released last month by The Outline, Facebook engagement for conservative websites Breitbart and PragerU dropped by 28% and 32%, respectively, following Facebook’s January 12 announcement of changes to its algorithms for news publishers. Major media entities were disproportionately affected, as well, with the right-leaning Fox News seeing a 26% drop in Facebook engagement while the left-leaning CNN only saw a 2% decline. The New York Times and Washington Post actually saw slight increases during the time period in question. Other studies have found similar results.