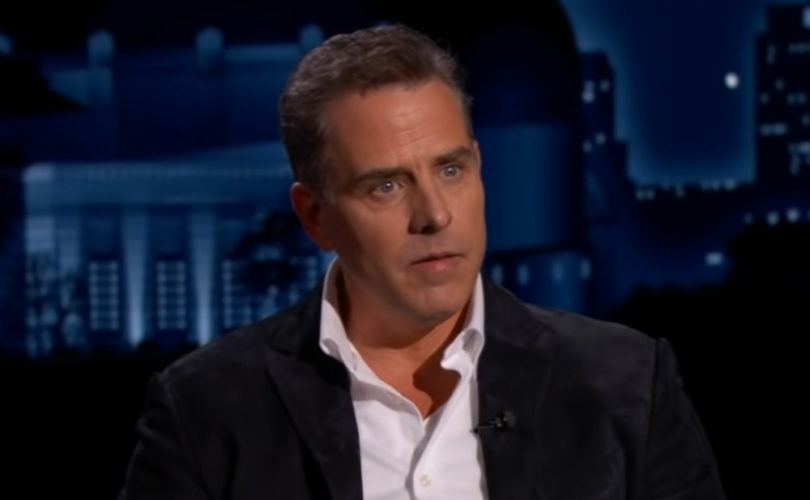 June 15, 2021 (LifeSiteNews) — As the U.S. bishops debate permitting Holy Communion for abortion-pushing President Joe Biden, the Biden family has been embroiled in a new abortion controversy as text messages from the President’s son have revealed his eugenic views on abortion.

“I think women should be able to veto the sperm a man purposely or accidentally released into a woman’s v—-a with her consent and often without her consent,” wrote Hunter Biden in a 2018 text message. The crude language is nothing new for those familiar with the laptop’s contents, which include lewd photos and video, along with the evidence of what many call treasonous behavior on the part both of the Biden family and the FBI which concealed it.

The new text messages come by way of Jack Maxey, the journalist who is most noted for doggedly pushing the mainstream media to reveal the evidence of crime and treason in the laptop, which has been verified as belonging to Hunter Biden, Joe Biden’s second son. Maxey reveals for the first time in a message to LifeSiteNews texts from Hunter Biden expressing his views on abortion.

Demonstrating a eugenic belief that the offspring of criminals are also bound to be criminals, Hunter Biden wrote, “If a woman feels she’s not equipped to raise a child and was raped by her husband and chooses an abortion should[n’]t she be able to make the judgement that her husbands [sic] genes should[n’]t be carried into a. New [sic] generation of rapists.”

Monica Kelsey, who was herself conceived in a violent rape, commented on Biden’s text. A former firefighter who now works to save the lives of babies that would otherwise be abandoned by their mothers, Kelsey told LifeSiteNews that the Biden quotes make her “angry and sad at the same time.”

“A child like myself, who was conceived in rape and abandoned at birth, shouldn’t be punished for the crime of their father,” she said. “I am a medic and firefighter and I have saved hundreds of lives because what man meant for evil, God used for good.”

“I shouldn’t have to justify my life to anyone, but after reading his comments, I feel like I have to show my successes so that others will see my value,” Kelsey added. “Our value should never be determined, by the parents of the child. They should and are valued by our creator.“