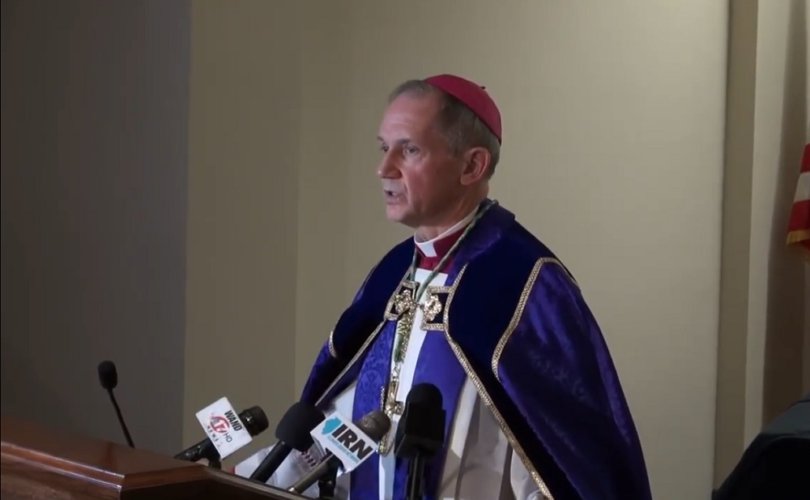 SPRINGFIELD, Illinois, June 6, 2019 (LifeSiteNews) ― The bishop of Springfield in Illinois has barred pro-abortion legislators from receiving the sacrament of Holy Communion.

Bishop Thomas John Paprocki has ruled that state legislators who are working to pass Illinois’s new abortion bill may not present themselves for communion in his diocese and that priests are expressly forbidden from giving the Eucharist to both the Senate president and the speaker of the House.

“In accord with canon 915 of the Code of Canon Law … Illinois Senate President John Cullerton and Speaker of the House Michael J. Madigan, who facilitated the passage of the Act Concerning Abortion of 2017 (House Bill 40) as well as the Reproductive Health Act of 2019 (Senate Bill 25), are not to be admitted to Holy Communion in the Diocese of Springfield in Illinois because they have obstinately persisted in promoting the abominable crime and very grave sin of abortion as evidenced by the influence they exerted in their leadership roles and their repeated votes and obdurate public support for abortion rights over an extended period of time,” Paprocki wrote in a statement dated June 2, 2019.

“These persons may be readmitted to Holy Communion only after they have truly repented these grave sins and furthermore have made suitable reparation for damages and scandal, or at least have seriously promised to do so, as determined in my judgment or in the judgment of their diocesan bishop in consultation with me or my successor,” he continued.

Although they are not named, Paprocki included other pro-abortion state politicians in his interdict, saying, “I declare that Catholic legislators of the Illinois General Assembly who have cooperated in evil and committed grave sin by voting for any legislation that promotes abortion are not to present themselves to receive Holy Communion without first being reconciled to Christ and the Church in accord with canon 916 of the Code of Canon Law.”

Last Friday, the Illinois legislature sent Senate Bill 25, known as the Reproductive Health Act, to the governor for approval. Blatantly pro-abortion, Senate Bill 25 seeks to protect the “fundamental rights of individuals to make autonomous decisions about one’s own reproductive health.” It passed in the Senate by a 34-20 vote.

Democrat Gov. J.B. Pritzker has vowed to sign the bill, which asserts that the “fertilized egg, embryo, or fetus does not have independent rights.” The new law will go into effect immediately upon signature.

According to the Thomas More Society, the new Illinois Reproductive Health Act will allow abortions for any reason throughout all nine months of pregnancy; eliminate restrictions regarding where abortions may be performed; allow non-physicians to perform abortions;  undermine and threaten institutional and individual rights of conscience; jeopardize any meaningful regulation of abortion facilities; require private health insurance policies to include coverage for all abortions, with no exemptions, even for churches and other religious organizations; eliminate any requirement to investigate fetal deaths or maternal deaths resulting from abortion; repeal a law prohibiting “kickbacks” for abortion referrals; repeal the Parental Notice of Abortion Act of 1995, which has been responsible for a more than 55-percent reduction in abortions among Illinois minors since 2012; and force parents to pay for their minor children’s abortions.

Paprocki issued a press release on May 28 in which he asserted that the proposed legislation is evil.

“I condemn the gravely immoral action of the Illinois House of Representatives in passing Senate Bill 25, labeled with a highly misleading title as the ‘Reproductive Health Act,’ purporting to declare abortion a fundamental right,” he wrote.

The Eucharist is the most sacred aspect of our Catholic faith. As sacred Scripture warns, “Whoever eats unworthily of the bread and drinks from the Lord’s cup makes himself guilty of profaning the body and of the blood of the Lord.” To support legislation that treats babies in the womb like property, allowing for their destruction for any reason at any time, is evil. It’s my hope and prayer these lawmakers reconcile themselves to the Church so they can receive Communion.

Paprocki, himself a canon lawyer, consulted with other canon lawyers throughout North America before issuing his decree, according to the June 6 press release.

In 2018, Bishop Paprocki barred Illinois senator Dick Durbin from Holy Communion because of Durbin’s vote against legislation that would have protected children from abortion after 20 weeks gestation.