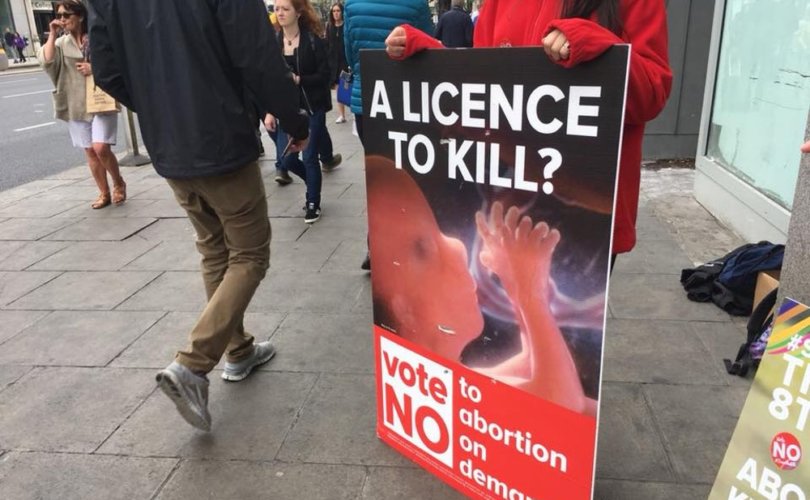 IRELAND, May 26, 2018 (LifeSiteNews) – Irish citizens voted to legalize abortion on Friday, ending Ireland’s legacy as one of the world’s most pro-life nations.

The votes are still being officially counted, but the pro-abortion campaign is declaring victory and pro-lifers are calling this a “tragedy of historic proportions.”

“The 8th amendment did not create a right to life for the unborn child – it merely acknowledged that such a right exists, has always existed, and will always exist,” the pro-life Save the 8th campaign said in a statement. “What Irish voters did yesterday is a tragedy of historic proportions. However, a wrong does not become right simply because a majority support it.”

Ireland has one of the lowest maternal mortality rates in the world. The Eighth Amendment of its Constitution guaranteed equal rights for pre-born babies and their mothers.

Repealing the Eighth Amendment was a decades-long goal of the abortion movement. The Irish voted by 67 percent to add the Eighth Amendment to their constitution in 1983, making the Emerald Isle a uniquely safe place for pre-born babies in contrast to the rest of the West’s liberal abortion regimes.

More people in Dublin, where the majority of residents supported the “repeal” campaign, voted in this referendum than in 2015 on same-sex “marriage” and in their general election.

One students’ union in Dublin created a safe space-like “chill zone” where students could “de-stress” as the results were counted. It became apparent that abortion advocates had won and only 14 students utilized the room, The Guardian reported. Exit polls showed around 87 percent of 18- to 24-year-olds voted for abortion.

In early 2018, the Irish government approved putting the Eighth Amendment to a vote in May with the promise that if passed, legislation allowing abortion on demand would be introduced. The proposed legislation – which may be introduced next week – is expected to be abortion on demand during the first 12 weeks of pregnancy for healthy babies and later throughout pregnancy for nebulous “health” reasons, for babies with disabilities, and babies conceived in rape.

Pro-life activists responded to the referendum with a massive canvassing and public awareness campaign about how many lives have been saved by the Eighth Amendment, how one in five babies in England is aborted, the fact that abortion kills a living human being, and the many harms to women and society that come with legalizing it.

The country once known for its strong Catholic heritage and identity voted in 2015 to amend its constitution to permit same-sex “marriage.” Despite Ireland’s move toward secularism and approval of redefining marriage, polls on how the Eighth Amendment vote would go were extremely close toward the end of the abortion vote.

Exit polls on the day of the vote, though, began to suggest a “landslide” victory for abortion.

In 2012, a woman named Savita Halappanavar, who was 17 weeks pregnant, died of sepsis (blood poisoning) at Galway University Hospital.

Three official investigations found that the 31-year-old died of a blood infection caused by “extremely virulent bacteria,” E. coli ESBL. Under Ireland’s abortion laws, the woman would have been permitted an abortion had doctors realized how sick she was when she came to the hospital.

They didn’t, and her death was due to medical negligence, not lack of abortion, official investigations revealed. According to the Health Information and Quality Authority, which investigated her death, doctors missed 13 opportunities to save her life.

The Irish politicians who pushed for the repeal of the Eighth Amendment squirmed when asked about the abortion proposal they were championing. Other Irish abortion advocates, like the country’s lesbian minister for children, simply denied the humanity of those still in the womb. Still others admitted the pre-born are humans, but advocated for killing them.

Ireland’s openly homosexual prime minister Leo Varadkar campaigned on a pro-life platform, but then came out in support of abortion and overturning the Eighth Amendment.

Varadkar “said the expected overwhelming win for the yes side was the ‘culmination of a quiet revolution in Ireland,’” The Guardian reported. “Quiet revolution” is a phrase used in a comparable situation in Quebec 60 years ago, where a traditionally Catholic culture liberalized in a short period.

“We will have a modern constitution for a modern country,” said Varadkar, who in 2014 said, “I consider myself to be pro-life in that I accept that the unborn child is a human life with rights.”

Amnesty International, George Soros, and other far-left groups poured money into the “yes” to abortion campaign. The international media – particularly the British media – aided the “yes” campaign with a constant barrage of stories about women who traveled abroad, usually to England, to abort their children.

Irish pop culture stars like U2 and Ed Sheeran were no help, either. The former, despite being led by professed Christian Bono, openly supported repealing the Eighth Amendment and the latter complained that pro-lifers were allegedly using a song he wrote about an “unborn” baby to promote their message.

Pro-life leader John McGuirk said he was “heartbroken” at the apparent result, and warned the implications of the vote will go beyond abortion.