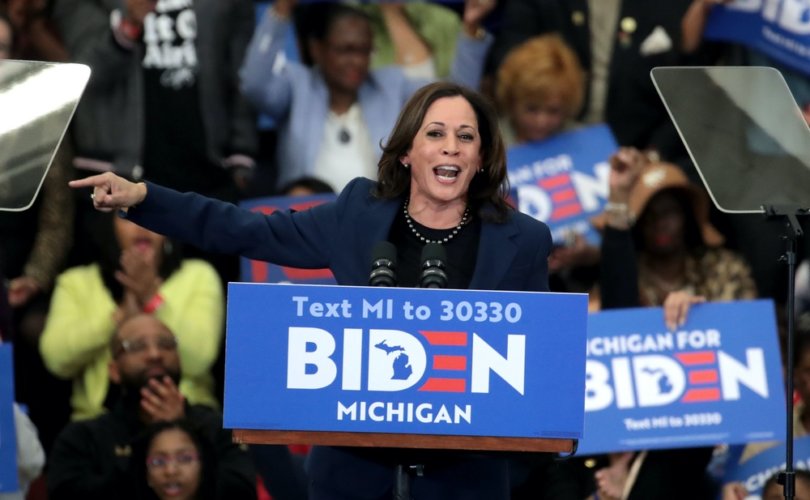 August 11, 2020 (LifeSiteNews) – Former Vice President Joe Biden has named Sen. Kamala Harris of California as his partner on the Democrat presidential ticket, doubling down on his allegiance with his party’s most vehemently pro-abortion elements.

Biden made the announcement Tuesday afternoon, calling Harris a “fearless fighter for the little guy, and one of the country’s finest public servants”:

Back when Kamala was Attorney General, she worked closely with Beau. I watched as they took on the big banks, lifted up working people, and protected women and kids from abuse. I was proud then, and I'm proud now to have her as my partner in this campaign.

As a black woman, Harris satisfies left-wing activists’ demands for female and minority representation, while the campaign may be counting on her background as a prosecutor to appeal to voters who lean left on policy but aren’t on board with the wave of anti-police sentiment promoted by Black Lives Matter. But on abortion, LGBT issues, and religious freedom, Harris is fully in sync with the far left.

Numerous pro-life organizations called on Harris to resign over the apparent conflict of interest, and Daleiden’s attorneys cited leaked emails that showed Harris’ office coordinating with Planned Parenthood on drafts of legislation that would criminalize undercover investigations like CMP’s.

As a Senate candidate, she bragged about forcing religiously-owned companies and pro-life pregnancy centers to violate their consciences. During Supreme Court Justice Brett Kavanaugh’s confirmation hearings, Harris tried to get him to call the Obergefell ruling that forced states to recognize same-sex “marriage” one of the “great moments in the history of the Supreme Court.” In December 2018, she suggested Trump judicial nominee Brian Buescher’s membership in the Catholic fraternal organization Knights of Columbus was problematic because of its pro-life, pro-marriage stances.

Harris’s stance perfectly aligns with that of Biden, who supports “codifying” Roe in federal law; repealing the Hyde Amendment (which bars direct public funding of most abortions); forcing states to accept Medicare funding for Planned Parenthood; reversing the Mexico City Policy (which bars federal funds from supporting abortion overseas); and directing the Justice Department to “do everything in its power” to block virtually all state pro-life laws, including parental notification requirements, ultrasound laws, and waiting periods.

Laurie Rubiner, a former vice president of public policy for Planned Parenthood, said of Harris’ abortion plans in 2019 to Vox, “What is different about this is that she’s really going on the offense.”

“That’s what we’re afraid of and what every American should balk at,” said Hawkins. “Sen. Kamala Harris has already proved that she will use any legal authority available to her to target pro-life Americans, and, in plans announced during her presidential run, she was direct in saying she wanted more power. Abortion was always going to be an issue in this election, but the stakes just got higher. The choice for anyone who…rejects abortion at any point in pregnancy and with taxpayer funds is crystal clear.”

“Kamala Harris is an extremist who supports abortion on demand through birth, paid for by taxpayers, and even infanticide – an agenda rejected by the overwhelming majority of Americans, including millions of Independents and rank-and-file Democrats,” added Susan B. Anthony List president Marjorie Dannenfelser. “As attorney general of California, Harris conspired with the abortion industry to launch a politically-motivated shakedown of brave citizen journalists who exposed Planned Parenthood’s role in the harvest and sale of aborted baby parts for profit.”