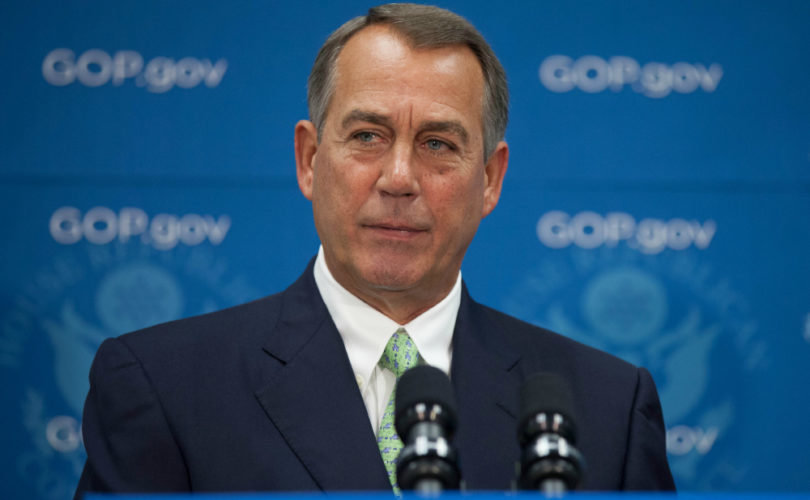 WASHINGTON, D.C., September 25, 2015 (LifeSiteNews) – After a tumultuous year that saw him repeatedly clash with his party's conservative base, Speaker of the House John Boehner, R-OH, announced this morning that he is resigning from Congress.

The announcement may mean the end of Congressional efforts to defund Planned Parenthood this at all costs this calendar year.

“The Speaker believes putting members through prolonged leadership turmoil would do irreparable damage to the institution,” an unnamed aide told Reuters. “For the good of the Republican conference and the institution, he will resign the Speakership and his seat in Congress, effective October 30.”

Boehner made the announcement at a closed-door meeting of his fellow Congressmen this morning, giving very few advance notice of his intentions. His closest ally, Minority Leader Kevin McCarthy, reportedly found out about the reason for the meeting only one minute before it commenced.

“This was a surprise to all of us,” Rep. Darrell Issa of California said.

Several members shed tears alongside the famously lachrymous Boehner, who closed by saying the Peace Prayer of St. Francis.

Boehner resigned one day after his 20-year effort to have a pope address Congress. But he had been part of another long-term battle against members of his party's caucus.

After deposing numerous members from leadership position for voting against his priorities on trade or procedural issues – but not on life or marriage – the party's conservatives had sought to force Boehner out of power.

Rep. Ted Yoho led an insurrection against Boehner but garnered few votes in his short-lived attempt to take the top spot in the House.

More recently, it came to light that Boehner lacked the votes to be re-elected Speaker if Rep. Mark Meadows pushed a measure to vacate the chair; Boehner would have to rely on Democratic votes, which were uncertain.

Conservatives had recently discussed elevating McCarthy to the top spot, on the condition that he name a more conservative member – such as Rep. Jim Jordan of Ohio or Raul Labrador of Idaho – to another leadership position.

McCarthy is all but certain to become the next Speaker, insiders tell LifeSiteNews.

Rep. Paul Ryan of Wisconsin, has announced he will not seek the job.

Boehner, who has served in the House since 1990, became Speaker after the 2010 midterm elections. But the Tea Party voters who powered the GOP back into the majority after an historic landslide for conservative Republicans found him too willing to accommodate President Barack Obama by funding Obama's initiatives while holding what they derided as “show votes” on conservative priorities.

“Today’s announcement is a sign that the voice of the American people is breaking through in Washington,” Michael A. Needham,  chief executive officer of Heritage Action for America. ” Now is the time for a principled, conservative leader to emerge.  Heritage Action will continue fighting for conservative policy solutions and we look forward to working with the new leadership team.”

Boehner said in his farewell statement, “My mission every day is to fight for a smaller, less costly, and more accountable government.  Over the last five years, our majority has advanced conservative reforms that will help our children and their children.  I am proud of what we have accomplished.”

“It was my plan to only serve as Speaker until the end of last year, but I stayed on to provide continuity to the Republican Conference and the House,” he said. ” It is my view, however, that prolonged leadership turmoil would do irreparable damage to the institution.  To that end, I will resign the Speakership and my seat in Congress on October 30.

“God bless this great country that has given me – the son of a bar owner from Cincinnati – the chance to serve,” he said.

The Speaker will reveal more about his decision this weekend on Face the Nation.

As he left, members of both parties thanked him for his collegiality. “I looked out for him in ways that I could; he looked out for me in ways that he could,” said former Senate Majority Leader Harry Reid, D-NV. “I will always consider John Boehner my friend.”

Sen. Marco Rubio made the announcement live at the Values Voters Summit, a conservative and evangelical meeting taking place in the nation's capital.

Upon hearing it, the audience broke into a standing ovation.

His one-time mentor, Jeb Bush, showed only support for Boehner's tenure. He said John Boehner had done an “excellent job” and tweeted:

John Boehner dedicated his life to public service. Bringing the Holy Father to Congress was a fitting cap to a great career.

But many will not be content until a more conservative, confrontational leader takes the helm – and takes the fight to President Obama.

“The Republican Establishment should look at the response of the grassroots to Boehner's departure,” Judson Phillips, the founder of Tea Party Nation. “The Republicans can still save the party, if they tread very carefully in choosing a new Speaker.”

‘Get this bill to the floor of the House and pass it!’ Pro-life protesters demand action outside John Boehner’s offices
Why I chose to get arrested at Speaker Boehner’s office